The yield curve inversion —when yield on the 2-year Treasury note exceeds that on the 10-year note—is normally considered a sign that recession is coming. But this time, analysts say, it just signals caution, keep an eye out. 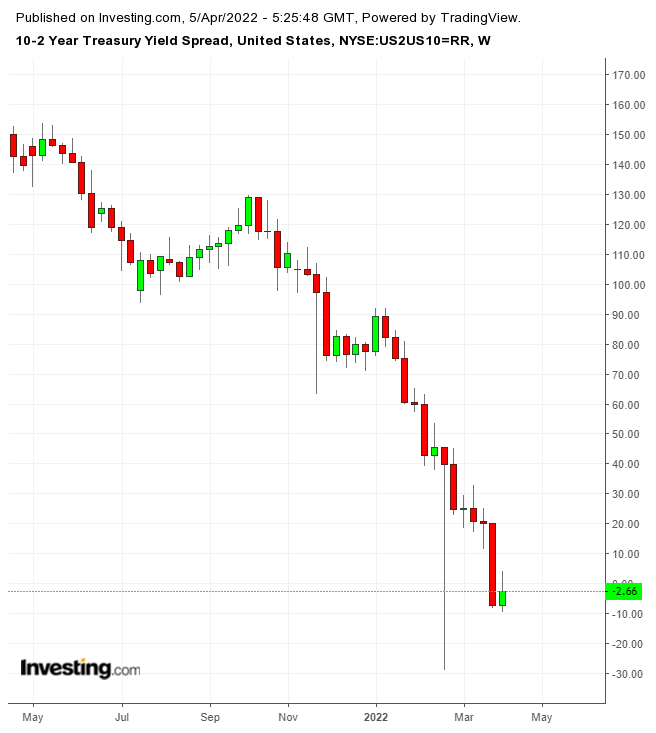 Of course, there's nothing like an inverted yield curve to get analysts and commentators scrambling for reasons why this time is different. Ignore history, they say, times have changed (something analysts have said since time immemorial).

Or they simply say it’s just wrong, providing qualifiers such as: look at the robust labor market! Look at the strength of the economy! This might have been a reliable indicator in the past, they say, but things are different now.

This is the thing about forecasts and indicators—they are looking to the future, not the present. Skeptics reluctant to accept the notion that a recession might be on the way cite data to support their doubt.

For some of these doubters, it is the 3-month , 10-year yield curve that counts, which is steeply positive and not signaling a recession. Moreover, real yields remain in negative territory, so they are not going to slow economic growth and usher in a recession.

Maybe the skeptics are right, but perhaps the operative word in "signaling caution" is caution. Bill Dudley, the former head of the New York Fed and vice chairman of its policymaking panel, has been severely critical of Fed policy recently, and he now says recession is "inevitable" because of that policy.

Dudley relies on the so-called Sahm Rule, which says recession will come when the 3-month moving average of the unemployment rate rises more than a half-percentage point from its low over the past year. Dudley argues that the Fed will now have to hike interest rates strongly enough to significantly raise unemployment and the Sahm Rule will kick in.

The unemployment rate has been coming down, but if Dudley is right, that will change if the Fed follows through on the 2-percentage point increase in overnight rates that investors currently expect .

Mohamed El-Erian, another critic of Fed policy, is warning that Fed efforts to catch up after falling far behind the curve on inflation could well tip the US into recession, regardless of how positive the 3-month, 10-year yield curve is at the moment. American consumers have still to react to the full impact of inflation, says El-Erian, the former chief executive of bond fund giant PIMCO.

Many analysts expect the minutes of the Federal Open Market Committee from mid-March, due out this Wednesday, will push up the 10-year note yield and end the inversion with details of the Fed's plans to start running off its bond portfolio. The Fed’s bond buying, which continued long after the pandemic emergency had subsided, is blamed for price distortions that may be interfering with the indicative quality of the yield curve inversion.

But running off the bond portfolio won’t end the Fed’s dilemma on how quickly to raise overnight rates because it won’t end the momentum inflation has built up. The inverted yield curve signal can come two years ahead of the actual recession. A lot can happen in two years.