For years the FAANG stocks - Meta (Facebook (NASDAQ: FB )), Apple (NASDAQ: AAPL ), Amazon (NASDAQ: AMZN ), Netflix (NASDAQ: NFLX ), and Alphabet (Google (NASDAQ: GOOGL )) have been on a singular upward rise. The stock prices rallied even higher during the pandemic, driven by extreme optimism around the growth of these companies. This optimism is reflected in the growing dominance of technology companies in the NASDAQ, which currently stands at 51%.

However, 2022 turned out to be a big speed bumper on this optimism. NASDAQ, which grew by 112% in the past five years, has been down by almost 30% this year. NASDAQ IT index, which grew by 87% last year, has been down nearly 32% in 2022. So, what changed the outlook expectation of these companies, and is the FAANG dominance fading away?

Growth tapering down
The tech stocks have plummeted, mainly because of the subdued earnings reported this quarter.

Facebook faced a major loss in its ad sales due to a privacy issue with the iOS, and the expenses incurred to integrate Meta have driven the price down by 44% YTD. Netflix reported its first loss of subscribers, and the company guided for an even sharper loss in the coming quarters. Google said that its profits from ad sales are down by 8%. Apple and Amazon might never see the same deals again, as, during the pandemic, people were glued to their devices and were forced to purchase everything online.

Are all these signs pointing towards another dot com bubble and tapering expectations for these technology stocks or just a temporary blip owing to weak macro sentiments? Let us find out. 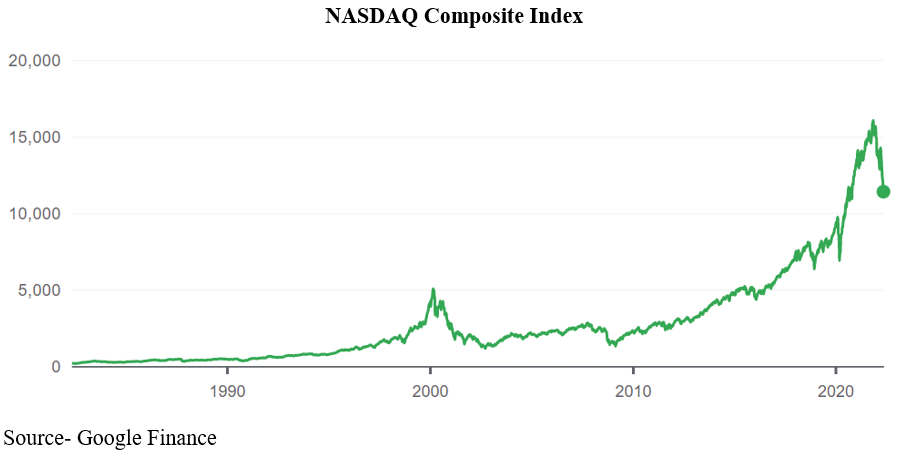 Since 1995, NASDAQ composite index led by new-age technology companies started rising. Anything which had dot com at the end was believed to have the best prospects for future growth.

Startups launched their IPOs at unrealistic valuations as everyone believed in their growth potential without due diligence. Led by this notion, many investors invested vast amounts into these companies.

VC funds were swayed by this fad buying and invested in these companies even when they showed no signs of profitability. These companies pushed the NASDAQ composite index to more than 5000 points in 2000. This led to the formation of what is infamously called the dot com bubble.

As investors realised the non-viability of these businesses, they started selling their holdings in these companies. The panic selling eroded all the gains, and the index crashed, losing 78% of its value by October 2002. Investors lost more than USD 1.7 trillion during the crash.

Many tech companies caught up in the bubble had to shut down their businesses. However, those who endured the crash and had better business models, including companies like Apple, Amazon, and Facebook, became tech giants as we know them today. 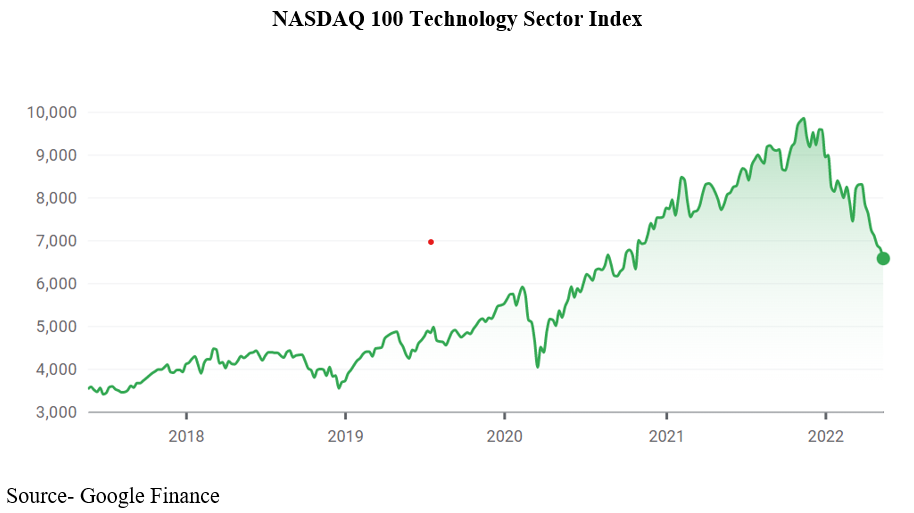 Many people believe that history is repeating itself.

Falling Indices – NASDAQ 100 Technology Sector Index (Equal weighted index based on the securities of the NASDAQ-100 Index that are classified as Technology) has fallen 31%. In contrast, Nifty IT  has lost more than 25% since this year. This is similar to NASDAQ Composite in 2002, which shed 78% of its value by October 2002 from its peak in March 2000

Speculative Valuation of Technology Companies – New IPOs have raised massive amounts from the markets at insane valuations. A case in point is the IPO of the snowflake in the US and Paytm (NS: PAYT ) in India. Snowflake (NYSE: SNOW ) raised $3.4 bn and became one of the largest software IPOs of 2020. Similarly, Paytm raised ₹18,300 Cr in one of the largest IPOs in India. However, many analysts feel that these stocks have inflated valuations and don't justify their growth potential. Another example is Zoom Video Communications Inc (NASDAQ: ZM ), whose share price zoomed past USD 500 at the pandemic's peak due to their belief in video communication but has since lost 80% of its value.

High Proportion of technology companies in NASDAQ Composite Index – In  2000, technology companies represented 64.9% of the NASDAQ composite, which is similar to 51.11% these days. The tech sector is as dominant in the market as it was during the dot com bubble. This disproportionate representation makes the whole market vulnerable to tech sector movement, and any trouble in the tech sector resonates across the entire economy.


Why this is nothing like the dot com bubble?

The current market scenario cannot be compared to that in the early 2000s. The valuations of technology stocks, particularly the FAANG stocks, have aligned with their growth and cash flows, which was not the case during the dot com bubble. NASDAQ composite index grew by 400% from the late 90' till 2000; however, the growth from 2015 to 2020 has been a moderate 180%. This has been in line with the broader growth of these companies.

Stable business models: The fundamentals of tech companies today are much better than those during the peak of the dot-com bust. These companies have proven business models and capable management. The companies during the late 90s were early age startups, and the technology sector was starting to pick up. Internet companies had just entered the markets and experimented with new technologies, many of which were still unproven. The valuations were based on speculation and not on the business that these companies could generate. These companies' business was also volatile as they didn't have recurring revenues or proven products. Today the situation is entirely different. Tech stocks, particularly FAANG stocks, have more than $8 trillion in market cap. Unlike the companies of the 2000s, they have solid businesses and a vast user base, making them much more resilient.

Coronavirus Pandemic: Unlike in 2000, the markets right now are recovering from a black swan event like the Covid – 19 pandemic. The pandemic caused a dramatic increase in the prices of tech stocks at first. These stocks benefited due to the pandemic-induced work from home requirements and the stimulus packages that different central governments announced. Idle cash found its way to the markets, especially in new-age fintech, edtech, and food tech companies that started mushrooming during the pandemic. The situation was also amplified due to the behavioural changes induced by the pandemic. The demand for digital services increased, which increased the revenue for digital service providers, which resulted in better market performance. It was expected that this behaviour would continue, but the receding pandemic has impacted the needs of consumers, and the effect has been most visible in the tech sector.

Macroeconomic Factors: Unlike in 2000, speculative buying and problems emerging from them are not the only reason for a market slowdown. Lower interest rates during the pandemic benefited tech stocks to a great extent. The quantitative easing program of the Fed allowed interest rates to fall to 0%, which made investing in these tech stocks attractive. Now, those steps are being reversed to deal with the persisting inflation. This is affecting the valuation and long-term growth potential of tech stocks. In the DCF valuation, the discount factors increase as interest rates rise. This impacts the company's long-term cash flow generating capacity and thus hurts the stock's intrinsic value. Future growth values are being revised as the environment shifts from low to high-interest. This has a considerable impact on their valuation, so the investors are pulling out of these stocks.

Conclusion
Even though there are some similarities between the economic situation in 2000 and 2022, the present conditions do not resemble a bubble. Even though some stocks are overvalued, most companies today are priced close to their fair price and represent the true growth potential of the tech companies. These companies are qualitatively better placed when compared to their peers in the year 2000. During this slowdown, these companies have been investing considerable sums in research and development, thus increasing the entry barriers for new companies. They have learnt from their mistakes in the past and are much more mature than they were two decades ago. Instead of being paranoid, investors must go back to due diligence and fundamental study of stocks to make the most of this market.