Currently, in a ‘crab’ pattern, the price of Bitcoin is constantly going up and down by a few thousand dollars but remains range-bound within $30k-$40k.

Having a drawdown of 50% after rallying 1,610% from March low to mid-April all-time high, the sideways trading is expected to continue for months and trend up if the bull market is intact and down if we are in fact in a bear market.

With new retail, institutions, corporations, and even countries involved in Bitcoin this time, it’s to be seen just how this cycle will play out.

But for now, activity is dying down this month.

May was a record month in terms of many factors, such as volume and fees. But the month ended up wiping out more than a trillion dollars from the market as BTC dropped to $30,000 and $28k on some exchanges. Ether meanwhile ended up falling to $1,725 from the high of $4,375 that occurred just over ten days before.

6 min The May Crypto Sell-off Predominantly Occurred in the US Session 18 h Best Cryptocurrencies with Growth Potential to Buy In June 21 h Polygon And 0x Team Up to Devote $10.5 Million Into Attracting New Users & Developers

During this May sell-off, the most selling actually occurred during the US session.

Now, with most of the gains made in 2021 wiped out, people aren’t really getting back into the market yet, which according to some, could be a ‘sell in May and go away’ phenomenon in work.

This has the volume on exchanges dropping substantially in recent weeks. Daily exchange volume (7DMA) has gone down to $41.44 billion on June 12th from the ATH of $89.69 billion on May 26th.

Even the new follower count of big exchanges has been recording a big drop. Trading in NFTs has also come down a lot, but it remains a much bigger space than last year.

Much like the spot market, in the futures market, so far in nearly two weeks, the total volume is $670 billion; last month, the total futures volume reached 2.56 trillion.

The premium in the futures market has also gone down massively. Funding rates have fallen into the negative territory; just last month, the annualized basis was 40.71%.

The post The May Crypto Sell-off Predominantly Occurred in the US Session first appeared on BitcoinExchangeGuide. 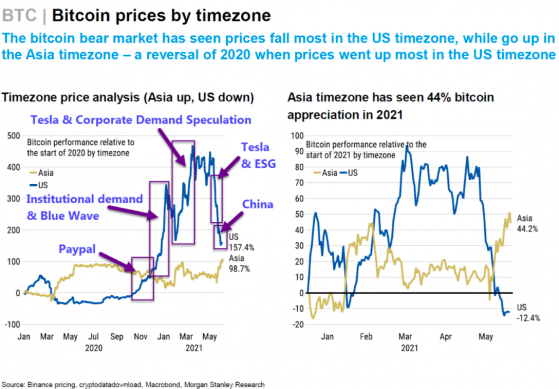