(Bloomberg) -- PG&E Corp., the California utility giant forced into bankruptcy by two years of devastating wildfires, warned that it may orchestrate its biggest planned blackout yet to keep power lines from sparking more blazes.

PG&E may cut electricity to more than 645,000 customers in the Bay Area and beyond, including parts of Santa Clara and Alameda counties. Shutoffs are set to begin early Wednesday -- when hot, dry winds are forecast to pick up speed -- and may last several days. Edison International (NYSE: EIX ) also warned it may cut power to about 106,260 Southern (NYSE: SO ) Caliofrnia customers.

Altogether, an estimated 2.25 million people may be affected.

Never before has a utility planned such a widespread shutoff affecting so many customers at once to avoid a wildfire in California. It’s the latest testament to how climate change-driven extreme weather is forcing people and businesses alike to adapt. This week’s outage will mark the first time PG&E has coordinated a blackout in a major metropolitan area. Previous ones involved rural areas prone to wildfires.

The planned shutoff appears to spare most of Silicon Valley’s big tech operations. Mountain View, Santa Clara and most of San Jose were outside of PG&E’s affected zones as of late Tuesday morning. A detailed map posted on PG&E’s website also showed Tesla (NASDAQ: TSLA ) Inc.’s Fremont factory lying outside the zones, as well as San Francisco, PG&E’s hometown.

The outage is striking almost two years to the day after a series of deadly wildfires -- most of them blamed on PG&E’s equipment -- broke out across Northern California’s wine country during a fierce wind storm. Then, last year, one of the company’s transmission lines ignited the state’s deadliest blaze yet -- the Camp Fire, which leveled the town of Paradise and killed 86 people. The estimated $30 billion in liabilities from those fires forced PG&E to declare bankruptcy in January.

PG&E and the state’s other utilities are now taking more extreme measures than ever to keep their power lines from sparking blazes. PG&E has begun switching off transmission lines in advance of high winds.

“This is shaping up to be one of the most severe dry wind events we’ve seen in our territory in recent years,” Michael Lewis, senior vice president of PG&E Electric Operations, said in a statement. “It could take several days to fully restore power after the weather passes and safety inspections are completed.”

For PG&E, the stakes are especially high. Another major blaze sparked by its equipment could upend the company’s restructuring plans. Shares were down 3.6% at 3:06 p.m. in New York.

More details on the upcoming shutoffs: 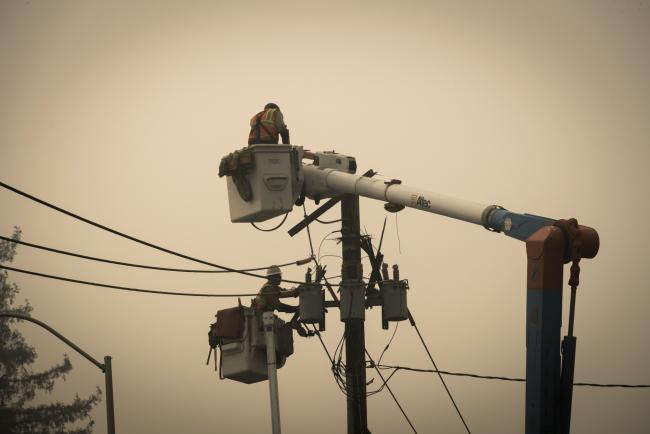