(Bloomberg) -- Democratic Senator Joe Manchin isn’t closing the door Senate passage of President Joe Biden’s economic package by the end of the year, but said he has growing concerns about rising U.S. debt and soaring consumer prices, after a measure of inflation hit the highest in four decades.

The West Virginia Democrat, who said he’ll be talking with Biden later today about the roughly $2 trillion social-spending package, also said Congress also needs to account for foreign policy challenges that might compete for resources -- including Russia’s troop buildup on the border with Ukraine and China’s threats to Taiwan.

“Inflation is real,” Manchin told reporters. “It’s not transitory. It’s alarming it’s going up, not down. And I think we should be more concerned about geopolitical fallout.”

Biden, speaking to reporters separately on Monday, declined to specify his message to Manchin in their expected call. He said his objective when speaking with lawmakers generally is to “convince them that what I’m proposing makes sense and it’s not inconsistent with what they believe.”

Senate Majority Leader Chuck Schumer insists the Senate will pass the sweeping tax-and-spending package before Christmas, but there’s still much work to do and time is running short.

Manchin also said that he still wants a package of about $1.7 trillion, adding that “whatever Congress is considering doing we should do it within the limits of what we can afford.”

He said he’s increasingly concerned about the way Democrats are making some programs in the so-called Build Back Better legislation temporary -- which he says hides their true costs over 10 years.

The bill would add $3 trillion in deficits over ten years, the CBO said under the assumptions Graham asked them to use. That compares with $200 billion in deficits added under CBO’s score of the bill as written.

The White House and congressional Democratic leaders disputed the premise of the CBO report, arguing that Biden has long said he would only support expanding programs if doing so was fully paid for.

In addition, key pieces of the bill that are still under negotiation include a House-passed provision for four weeks of paid family and medical leave that Manchin opposes.

Also unresolved is an expansion of the federal deduction for state and local taxes, or SALT, which currently has a $10,000 cap. The House-passed version of Biden’s so-called Build Back Better bill lifted the cap on the write-off to $80,000.

Senators Bernie Sanders, a Vermont independent, and Bob Menendez, a New Jersey Democrat, say the House approach is too generous. They are instead looking at limiting the tax break to those under a certain income threshold, but disagree on what that should be.

Manchin’s vote is crucial for passage in a Senate split 50-50 between the two political parties. All Republicans in the chamber oppose the package.

The economic program would boost taxes on the wealthy and corporations while providing universal pre-kindergarten schooling, childcare subsidies, climate-change protections, expanded Obamacare health-insurance subsidies, and the ability of Medicare to negotiate prices on some medicines. 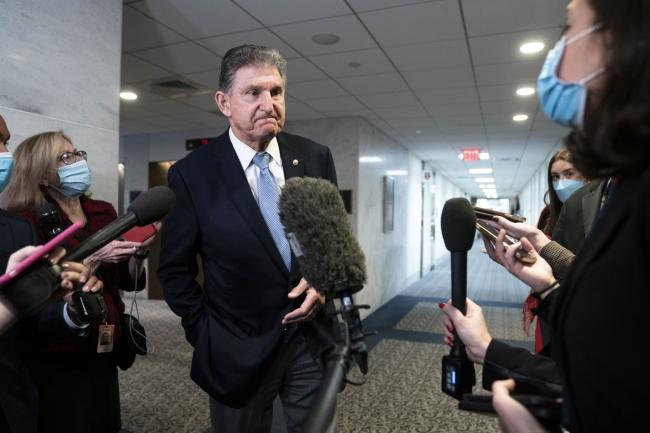