Investing.com -- The country’s biggest airline by market share IndiGo (NS: INGL ), in a sudden move on February 18 has informed that its co-founder Rakesh Gangwal has resigned from his position.

In a letter to the company’s board members, Gangwal stepped down from his position as the company’s director and has informed on reducing his stake in the company over the next 5 years.

Gangwal and his family hold a 36.6% stake in IndiGo, and according to the airline company’s current market valuation, the stake held by Gangwal family is worth Rs 29,847.7 crore.

The announcement comes two weeks after the airline’s board of directors, in a meeting on Feb 4 appointed Gangwal’s partner Rahul Bhatia as the company’s managing director.

Gangwal and Bhatia, initially co-founders of IndiGo, have been in a long-running dispute over the past three years. Rahul Bhatia is the first managing director of IndiGo.

In his address to the board members, Rakesh Gangwal wrote, “While new investors should benefit from the potential future growth in the Company's share price, a gradual reduction of my stake should also allow me to benefit from some of the upside. Like any plan, future events may impact my current thinking.”

He added, “I am concerned about the optics of reducing my holdings even though such transactions would only be undertaken when I do not have any unpublished price sensitive information.”

“I have been a long-term shareholder in the Company for more than 15 years and it's only natural to someday think about diversifying one's holdings,” he said. 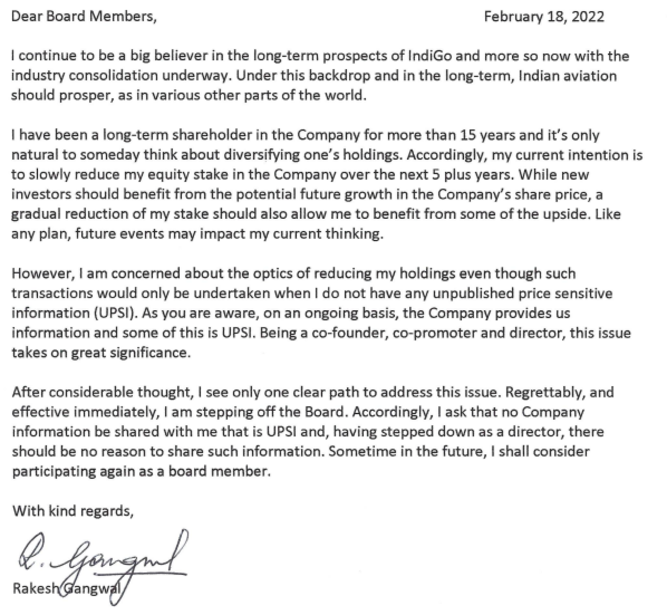