The stance would remove one avenue for averting a showdown with Republicans over the debt ceiling in the coming months that could lead to the U.S. missing payments to workers, beneficiaries or bondholders. Republicans led by Senate Minority Leader Mitch McConnell have vowed not to cooperate on another short-term debt-ceiling suspension as they did last month and say Democrats must raise the limit on their own given their significant spending plans.

Adding a debt-ceiling increase to the Biden bill, which may see a House vote this week, could have resolved any uncertainty over a potential U.S. payment default sometime between December and February.

Under Senate rules, the budget reconciliation vehicle that Democrats are using to advance Biden’s economic agenda could also be used to raise the debt ceiling. Addressing the issue in this way would let Democrats, if they stay unified, pass the measure without any Republican votes and avoid a GOP filibuster.

“At this point in time there is not an expectation that it will be in this reconciliation bill,” Hoyer told reporters. “We should be dealing with it in a bipartisan way.”

House Budget Committee Chairman John Yarmuth said lawmakers could still use the budget reconciliation route at a later time to bypass the filibuster. Under Senate rules, Democrats can amend the fiscal 2022 budget and then pass a standalone debt-ceiling bill, but the process would trigger days of unlimited amendment votes and other procedural delays on the Senate floor.

The Bipartisan Policy Center, a think tank, has estimated that the debt limit will cause the government to “no longer be able to meet all its obligations in full and on time” sometime between mid-December and mid-February. If Congress enacts the bipartisan infrastructure bill, then the risk of a payment default is is the earlier part of the window, because that measure makes a large transfer into the Highway Trust Fund. 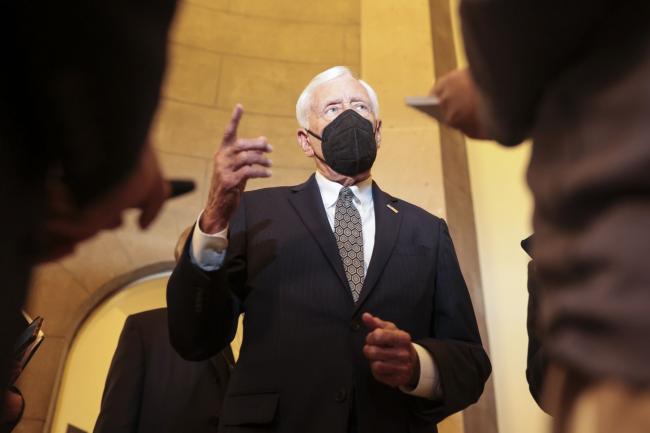