(Bloomberg) -- The more than 48 million Americans traveling by car this Thanksgiving holiday hoping to fill their tanks for less will be sorely disappointed.

Even though a group of major oil-consuming nations including the U.S. announced this week a coordinated plan to release crude from strategic reserves in order to bring down soaring energy costs, that’s not yet translating into lower prices at the pump. The regular unleaded gasoline price in the U.S., hovering around $3.40 a gallon, is up more than 60% from this time last year, contributing to the soaring inflation slamming American households as the country begins to recover from the pandemic.

Here are some of the factors keeping gasoline prices elevated:

Retailers Are Taking Their Time

Crude oil—which is generally the biggest driver of gasoline prices, making up about 57% of production costs last month—has been falling for four straight weeks before climbing again to start this week. Overall, crude futures and gasoline futures are both down about 7% from their recent peaks. But retail gasoline prices that customers pay haven’t followed suit. In fact, the gap between gasoline futures and retail pump prices widened to $1.20 a gallon last week, the most since 2008, excluding the early part of the pandemic.

That disconnect has the Biden Administration seeing red. Last week, President Joe Biden urged the Federal Trade Commission to probe possible illegal conduct in U.S. gasoline markets. “I do not accept hard-working Americans paying more for gas because of anti-competitive or otherwise potentially illegal conduct,” Biden said in his letter.

When wholesale prices decline rapidly, it provides a window for retail operators to sell at high prices for a few weeks before lowering prices, said Ernie Barsamian, chief executive officer at the Tank Tiger, a tank-storage broker. Eventually, pump prices will come down, but for now, some refiners and gas stations are enjoying the fatter margins, he said.

“Street prices can remain sticky because consumers are used to paying the higher price and the retail operators can surf that price down for one to two months. Those periods are a boon to retail operators as they can collect a year’s worth of profits in only a few months,” Barsamian said.

Supply and demand fundamentals are also at play. More than 53 million Americans are set to travel for the Thanksgiving holiday, with 90% opting to travel by car, according to AAA. At the same time, gasoline inventories are at four-year lows. Stockpiles have slumped to just 211 million barrels in the country, the lowest since November 2017, as supply can barely keep up with a surge in demand from households excited to travel this year after a 2020 holiday season on lockdown.

“Part of the reason that the national average hasn’t dropped more noticeably include the fact that we’re less than 24 hours away from one of the busiest travel days of the year. Not much incentive to shoot yourself in the foot,” Patrick DeHaan, head of petroleum analysis at GasBuddy, said in a Tweet. “Declines will happen, but it needs time.”

Some say drivers could see prices fall if refiners were relieved from at least some of their obligation to blend biofuels into gasoline. Most of the finished motor gasoline now sold in the U.S. contains about 10% fuel ethanol by volume, due to the so-called Renewable Fuel Standard that requires oil refiners and fuel importers to buy and blend renewable fuels into the U.S. fuel supply. Spot prices for ethanol have more than doubled this year and are up more than 60% in just the last three months.

Refiners can also meet their quotas by buying tradeable credits known as Renewable Identification Numbers (RINs). The cost of those credits, while down from all-time highs following reports that the EPA is considering lower biofuel targets, remain elevated due to the high ethanol prices. The industry is still waiting for overdue blending mandate proposals to be unveiled.

The higher ethanol and RIN prices are seen as a likely factor in adding to the sticker shock at the gas pump but some analysts argue they aren’t a leading cause. “For much of the pandemic, ethanol sold at a premium to gasoline,” Height Capital Markets analyst Benjamin Salisbury said in an interview, noting that it usually sells at a discount. “That may have added a penny or two to the retail prices.”

California Is Skewing the Numbers

The national U.S. gasoline price reported by AAA is an average, and it’s getting skewed by soaring prices in California. Retail prices in the Golden State have surged to record high of $4.705 a gallon as a pick up in seasonal driving demand coincides with a spate of local refinery outages, often driven by extreme weather. In 2021, the West Coast has faced additional supply constraints because of reduced refinery capacity.

“California is having a large impact to the national average since the state has over 10,000 stations and prices have trended higher there, but that should reverse soon,” DeHaan of GasBuddy said in an email. “I think stations will take their time knowing millions of Americans are hitting the road for Thanksgiving, but I would expect the drops to start any day.”

(Updates with additional details in the fourth paragraph ) 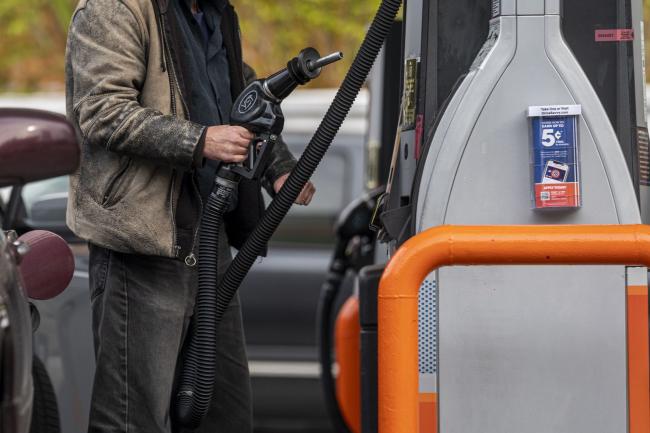