(Bloomberg) -- The Federal Reserve’s shift to pause mode is helping China’s currency defy a deepening slowdown across the world’s No. 2 economy.

Even after data on Thursday showed a sharp downturn in China’s factory-gate price gains, the yuan has hit its strongest against the dollar since July. It’s up 1.9 percent this week -- the most since July 2005 -- despite the central bank having moved to boost liquidity in the financial system.

Behind the resiliency: positive mood music from U.S.-China trade talks, and, perhaps critically, a shifting Fed outlook. Minutes from its December meeting showed American policy makers could place interest rates on hold through March or longer. That built on signals from Fed Chairman Jerome Powell last Friday about increased patience on tightening.

While a strengthening currency could pose headwinds for Chinese exports, it’s a crucial aid on a host of other fronts. For one, it helps to keep a lid on capital outflow pressures -- a key source of instability in the past. It deflects pressure from President Donald Trump, a longtime accuser of China manipulating its exchange rate for competitive advantage. And it gives China’s own policy makers greater flexibility to ease monetary policy if needed.

How long the reprieve lasts for the yuan, which tumbled 5.4 percent last year and was one of the worst performers in Asia, is uncertain. Powell on Thursday noted that the Fed will keep shrinking its balance sheet. The course of trade talks is unclear; Trump’s tariffs last year walloped Chinese markets. And American economic growth may yet send the Fed back into interest-rate hiking mode.

“The yuan can hold up fine” until the Fed hikes again, trade tensions resume and China “goes all-in on stimulus,” said Michael Every, head of Asia financial markets research at Rabobank in Hong Kong. “It’s a ‘when’ and not an ‘if’ for when it reverses direction again and we test new lows."

Fundamentals surrounding the Chinese economy have yet to respond to policy makers’ targeted efforts to shore up demand. Former U.S. Treasury Secretary Larry Summers has warned China is facing its toughest test in a decade. Citigroup Inc (NYSE: C ). economists say that the risk of deflation opens the door to a potential cut in the benchmark lending rate by the People’s Bank of China for the first time since 2015.

The moves could make yuan assets less appealing to foreign investors, resulting in capital outflows and depreciation. That said, the direction of causality can be fuzzy. The stabilization in the yuan itself at the end of last year might have renewed international investors’ appetite for Chinese bonds, which were among the world’s best performing in 2018. Overseas funds boosted their holdings of Chinese debt last month after net sales in November.

For now, the yuan is comfortably distant from the 7 per dollar level that market players view as a key psychological level, and some see it holding for some time.

“The yuan is supported by trade optimism and a dovish Fed” at the moment, said Frances Cheung, head of Asia macro strategy at Westpac Banking Corp. in Singapore. Though Westpac doesn’t see the Fed has having finished tightening, she said the currency will settle around 6.85 to 6.95 per dollar this year. 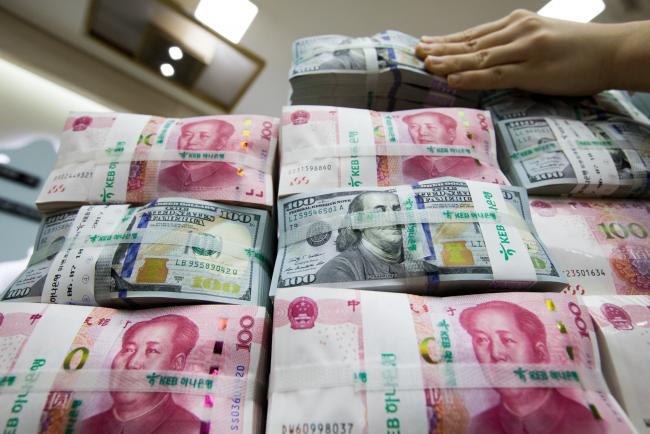