Boston-based investment giant Fidelity Group is injecting a heavy dose of hopium in the market with its latest “very special” webinar, where it took a deep dive into Bitcoin and its possible effects on the market.

Fidelity, which also has its own crypto arm, Fidelity Digital Assets that builds enterprise-grade bitcoin custody services for large institutions, isn’t new to the space as it first started mining Bitcoin (BTC) in 2014 and then Ether as well.

Now, the firm is putting out bullish reports on Bitcoin and sees the leading digital asset hitting $1 million before this decade is over and a whopping $100 million by 2035.

This much hopium was difficult to digest for some as one Redditor noted, “Bitcoin is not gonna reach $100 million. That would give it a market cap of $2,100 trillion. The total wealth of the entire world is $418 trillion.”

One of the charts depicts Bitcoin’s adoption curve based on active addresses count and compares it with broadband subscriptions, Internet users, and mobile phone subscribers.

The webinar also discusses purchasing power of various assets, not covering Bitcoin, where stocks are the clear winner at $3.9 billion, followed by bonds at $19.9 billion, and cash at $326k compared to the inflation index. The purchasing power of $1 has the least in fiat at a mere $0.02. Even the safe haven, gold , isn’t doing much better at $94 when the inflation index has a reading of $65.

The post Fidelity Predicting 0 Million per Bitcoin by 2035 first appeared on BitcoinExchangeGuide. 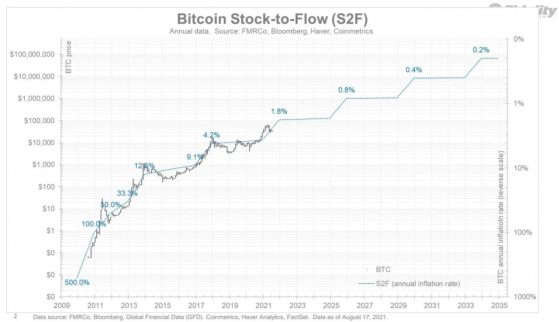