(Bloomberg) -- Production at U.S. factories rose less than expected in August as Hurricane Ida compounded an ongoing struggle among manufacturers with shortages of materials and labor.

The Fed estimated the hurricane subtracted 0.2 percentage point from the manufacturing figure. The median estimate in a Bloomberg survey of economists called for a 0.4% monthly increase in factory production and a 0.5% gain in total industrial output.

While resilient consumer demand, solid business investment and whittled-down inventories have supported demand, filling new orders has been hampered by limited factory headcounts and snarled supply chains. Looking ahead, any alleviation of those constraints should support further production growth.

Manufacturing job openings are at a record high, and for the products factories can source, prices have soared. Recent data from the Labor Department showed a price gauge of processed goods for intermediate demand, which include materials and components used in manufacturing and construction, are up 23% from 12 months ago, a fresh 46-year high.

The hurricane that struck at the end of August along the Louisiana coast forced plant closures for petrochemicals, petroleum and plastic resins.

The Fed’s industrial output report showed production of motor vehicles edged up 0.1%. That followed a 9.5% advance in the prior month that reflected a seasonal quirk related to the cancellation of many typical July plant shutdowns.

Furniture and related product output jumped 2.1% in August, while output of electrical equipment and textiles declined.

Manufacturing capacity utilization, a measure of plant use, ticked up to 76.7%, while total industrial capacity rose to 76.4%.

A separate report out Wednesday from the Federal Reserve Bank of New York showed manufacturing in the state this month expanded at a rapid pace as orders, shipments and factory employment accelerated. 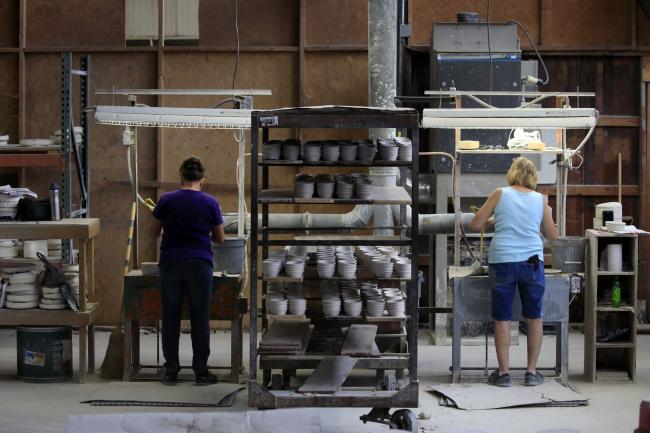