Investing.com - The EUR/USD pair displayed high volatility yesterday, climbing to a high of 1.0497, the highest since June 29, before correcting to a low of 1.0331 last night and finally settling at 1.0360 this morning (at the time of writing).

News was particularly heavy for the Euro/Dollar during the day yesterday, with protests in China initially causing a wave of risk aversion that led to a lower opening on Sunday evening.

Monday morning then saw a strong rebound, driven by a generalized decline in the dollar that did not appear to be driven by any particular headline. Some analysts pointed to the hope that the unrest in China would finally lead to an anticipated easing of the country's zero-COVID policy as the reason for the improved sentiment.

However, sellers then responded as the EUR/USD approached the key 1.05 level, sending the currency pair lower.

A few speeches from central bankers, including Christine Lagarde, the ECB President, and James Bullard, St. Louis Fed President enlivened the afternoon, but without much influence.

From a charting perspective, yesterday was mostly marked by a further failure of the EUR/USD to hold above its 200-day moving average, as seen on the chart below. 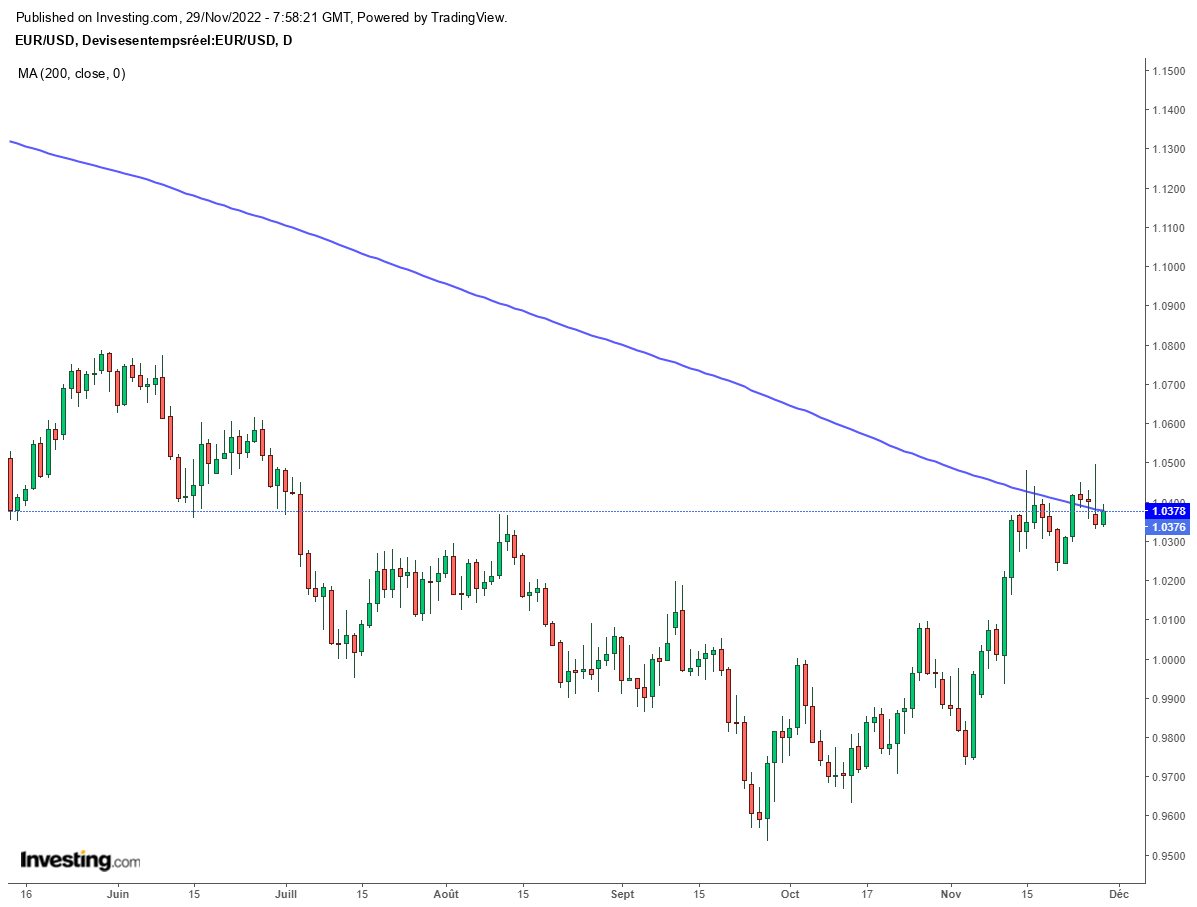 This indicator has been closely followed by many traders since November 15, when the EUR/USD price tested it for the first time since June 2021. Since then, the Euro/Dollar has made multiple attempts, most recently yesterday morning, to climb above this indicator. But each time, the attempt ended in failure.

However, this repeated inability to stay above the 200-day MA could lead to a more or less extensive correction of the Euro, according to analysts. In this context, the first potential supports to be considered on Tuesday are located on the psychological threshold of 1.03, then the low of November 21 at 1.0223.

That's especially the view of ING analysts, who wrote last night that "the second half of the week could potentially push EUR/USD back toward the 1.02 area," noting that tomorrow's expected Eurozone inflation data could be key.

"The question is whether inflation will fall back from the highs reached (not far from 11% year-on-year) and allow the European Central Bank to ease its hawkish rhetoric a bit," the bank noted in this regard.

Looking ahead to today, EUR/USD traders will be keeping an eye on Preliminary CPI for Germany for November's European statistics at 2pm. Across the Atlantic, the main economic release that could potentially influence the EUR/USD will be the Conference Board US consumer confidence index at 4pm.

>> Find all the important statistics for the Euro Dollar today in our economic calendar.