Economic confidence is slowly returning to the euro area where companies from manufacturers to retailers are picking up the pieces after devastating coronavirus lockdowns.

Sentiment in a European Commission survey rose in June, though less than economists had forecasts, and it remains well below the levels seen at the start of the year. The report -- like similar ones published recently -- indicates that full recovery is still a long way off.

The 19-nation euro region is set to shrink more than 8% this year, and European Central Bank President Christine Lagarde has warned that the pandemic will change parts of the economy permanently.

So far, confidence has clawed back about 30% of the combined losses of March and April, when far-reaching restrictions brought public life to a near standstill. While those limitations are now gradually being lifted, the continued spread of the disease in parts of Europe, as well as in the Americas, serves as a cautious reminder how quickly the situation can deteriorate again.

The commission report showed that employment expectations in the euro area have improved from their lows, but for some sectors they remain as much as 60% below pre-virus level.

The improvements come on the back of massive stimulus campaigns. The ECB is buying 1.35 trillion euros ($1.5 trillion) worth of debt, and governments have pledged hundreds of billions of euros in support. German Chancellor Angela Merkel’s coalition agreed this month on a sweeping 130 billion-euro plan, and Economy Minister Peter Altmaier has flagged a package of measures aimed at exporters for the coming week.

“If any European country is likely to see a V-shaped recovery, it’s Germany. Getting the virus under control caused less disruption than elsewhere, fiscal support is substantial and activity is picking up again.”

The European Union’s leaders held their first debate on a proposed 750 billion-euro plan to help their economies heal from the pandemic, and agreed to meet in person next month with the aim of reaching an agreement. 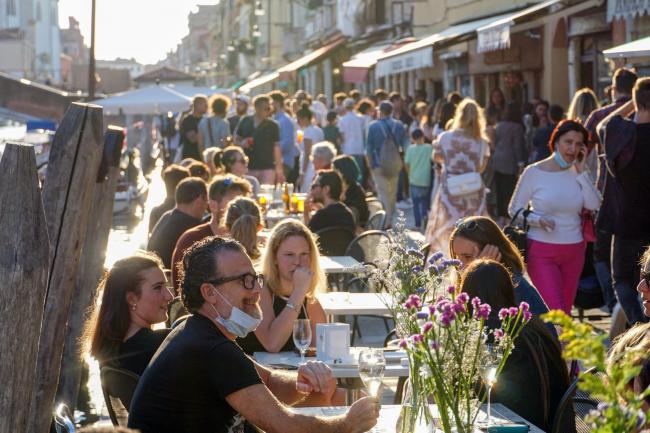