With Ether leading the rally this time around and Bitcoin still trading sideways around $47,600, ETHBTC rallied to 0.07465, closing on to some resistance around 0.0773 with a multi-year peak standing at 0.0823.

Crypto market participants expect Ether to flip Bitcoin as the leading cryptocurrency, though briefly in this cycle only to perhaps do so permanently in the long-term. While some market participants believe Bitcoin’s flipping would damage its reputation, others believe it wouldn’t matter because while Bitcoin is a digital gold that is a store of value, Ethereum is the base layer on which applications are built, both having their own separate market.

Price action for Bitcoin is basically going through consolidation over the last few weeks, as it trades in a new price range between $46k and $50k.

As we reported, Bitcoin investment products saw outflows for the 8th consecutive week totaling $3.8 million. 14 out of the last 16 weeks, the leading cryptocurrency has recorded outflows, totaling $650 mln, unlike altcoins which had yet another week of inflows, with Ethereum seeing $17 mln in inflows last week.

Still, the total assets under management (AUM) of Bitcoin is at $38 bln, and year-to-date inflows are at $4.1bn.

Meanwhile, on-chain data suggests that there has been a “significant increase” in HODLer net positions recently, which reveals that long-term investors are net buyers at these levels. “Generally, this is a fairly bullish signal for the medium term,” notes Delphi Digital.

When it comes to network fundamentals, BTC transaction count increased by 1% while ETH’s decreased by 4%.

ETH transaction fees, however, continue to rise thanks to ongoing NFT adoption. Total ETH fees actually increased by almost 100% week-over-week for an average of over $32 mln a day compared to BTC transaction fees averaging about $600K per day on the week.

Active addresses for both networks dropped week-over-week. For Bitcoin, it is currently around 275k per day, around 35% below the January peak, much like Ethereum’s, which is down 33% from May high, sitting at around 450k addresses per day, according to Glassnode.

As for non-zero addresses, Bitcoin’s continued to grind higher, having returned to over 38 million addresses, ready to take out the ATH. Ethereum non-zero address counts are also in a strong ascent, reaching a new ATH of 60.7 million addresses. At the same time, the proportion of addresses holding Ether for the short-term, 3-12 months, has risen to more than 40%, indicating that new ETH holders prefer holding.

Amidst this, the open interest (OI) on the CME for Bitcoin futures has climbed to $1.5 billion, following a steady growth throughout August and a new ATH of $760 mln for Ethereum futures.

While leveraged funds (hedge funds) have been accumulating new short positions, the cash-and-carry trade has yielded relatively weak returns on the CME futures. But they are likely not placing naked short bets on bitcoin and could be having exposure through other markets and using CME to hedge out risk.

This growing short exposure could also be because of the Grayscale discount, as some funds might be expecting the discount to disappear over time and seeking to hedge this bet using futures.

As we reported last week, Morgan Stanley (NYSE: MS ) disclosed buying upwards of 6.5 million GBTC shares and Bill Miller's flagship fund 1.5 million shares in GBTC. “These types of investors could be interested in hedging their positions through the CME futures,” noted Arcane Research. 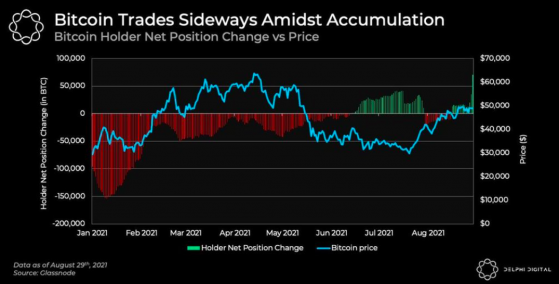