(Bloomberg) -- Delta Air Lines Inc (NYSE: DAL ). fell short of profit expectations in the second quarter and said high operating costs will persist through the rest of the year, weighing on a possible rebound as carriers try to capitalize on continued strong travel demand.

So-called unit costs will climb as Delta extends constraints on its flying capacity for the remainder of 2022 in an effort to reduce flight delays and cancellations, the carrier said in a statement Wednesday. Delta’s adjusted profit was $1.44 a share in the second quarter, missing the $1.64 average expected by analysts.

US carriers are trying to return to consistent profits after the rout in travel during the pandemic, and Delta said it expects “meaningful full-year profitability.” But elevated expenses and flight disruptions are limiting carriers’ ability to take advantage of higher fares, strong domestic demand and growing international travel.

“We’ve got to do everything we can, and we have been, to ensure we serve that demand and serve the quality of the operation and not try to grow beyond our means, which is tempting to do when you see the level of demand,” Chief Executive Officer Ed Bastian said in an interview. “I’d almost call it a seismic shift in where we’ve been over the last three or four months.”

Delta is the first major US airline to report results for the second quarter, with United Airlines Holdings (NASDAQ: UAL ) Inc. and American Airlines (NASDAQ: AAL ) Group Inc. set for the following week and Southwest Airlines (NYSE: LUV ) Co. on July 28. A group of 11 US carriers should report record quarterly revenue of $53.3 billion and combined pretax income of $4.2 billion for the three months ended June 30, according to Deutsche Bank analyst Michael Linenberg.

Delta will hold flying capacity to its June level for the rest of the year, and the third quarter will be as much as 17% below 2019. That will contribute to non-fuel unit costs about 8 points above its original plan for the full year on 5 points less capacity.

Labor costs, including overtime and added employees, along with higher costs per seat due to fewer flights, boosted expenses other than fuel.

Non-fuel costs to fly each seat a mile, a measure of efficiency, rose 22% in the second quarter compared to pre-pandemic levels and will also climb about 22% in the third quarter, Delta said. Total adjusted operating expense, excluding Delta’s oil refinery, rose 21% to $10.9 billion. Revenue was $12.31 billion, roughly in line with the $12.33 billion expected by analysts.

Third-quarter revenue will increase 1% to 5% over 2019 on sustained consumer demand into the fall, Delta said. It expects “steady progress in the return of business and international travel.”

Delta hasn’t seen signs of a pullback in travel spending because of inflation and the slowing US economy. Bastian said he expects “a reasonably healthy revenue outlook for the near to medium term for the industry.” 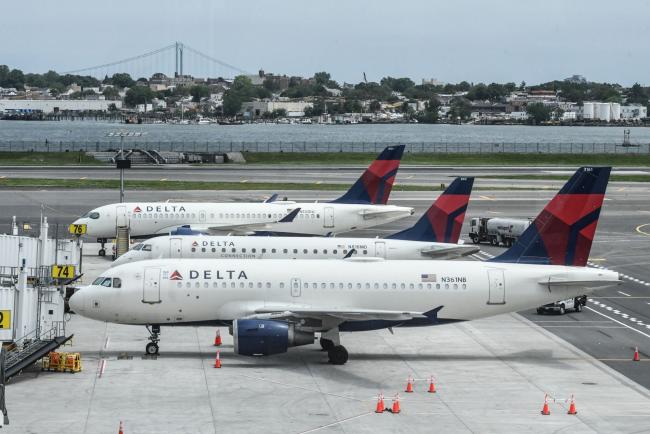