Parts and components that U.S. farmers need to keep combines running in the busiest farming season of the year are taking as many as three weeks to reach customer hands -- an eternity when fields need to be quickly harvested to stay ahead of wintry weather, according to dealers and customers in the industry.

Deere’s situation compounds global stresses brought on by snarled supply chains, with worldwide disruptions and shipping delays impacting everything from construction and automaking to farming and, ultimately, the ability to get food to consumers’ tables. U.S. corn and soybean farmers are racing to finish their final stretch of harvest and, along with disrupted trade flows, delays could hinder fall field work in preparation for spring plantings.

“I would call it a double whammy, because we already had a supply-chain shortage and now we have a strike,” Jon Fisher, who buys and sells tractors and other machinery in Columbia, South Carolina, said in an interview. “They couldn’t even fulfill the orders because of the supply-chain issues.”

Another sore spot for dealerships and customers is that the company is charging for freight and shipping -- something unheard of until the strike began, according to Fisher. The freight charges are “a big deal because parts are already expensive,” he said. “What used to be there in two to three days is three weeks.”

The delays are directly related to the ongoing labor strike involving 10,000 Deere union workers, who rejected a revised agreement earlier this week. Before the strike began on Oct. 14, equipment parts arrived in less than a week. Now there aren’t enough workers meant to load up trucks for delivery. The delays were confirmed by multiple John Deere dealerships.

“Certainly the strike has added an additional layer of uncertainty and we continue to assess our business continuity plans to address areas of highest priority,” Jen Hartmann, a spokeswoman at Deere, said in an emailed statement. “This has included ensuring parts are available for farmers currently in the midst of or wrapping up harvest.”

Growers have little to no option if they suffer equipment breakdowns and brand-specific parts are unavailable or back ordered from their local dealer. Some may salvage parts off older equipment or borrow from neighbors in the most desperate move.

Deere’s parts business is highly profitable, and can bring in as much as 18% of revenue, though that figure has dropped to less than 10% in the past three years. Parts brought in $3.35 billion, or 9.4% of revenue, last year.

To salvage those dollars, Deere has kept its factories running using salaried employees. The company has said it’s focusing on keeping parts depots and its parts distribution center operational to ensure farmers can complete the harvest.

Deere hasn’t said how many striking workers it has been able to replace, making it difficult for investors to know how far-reaching the impact could be to Deere’s parts delivery and ability to produce new machinery. 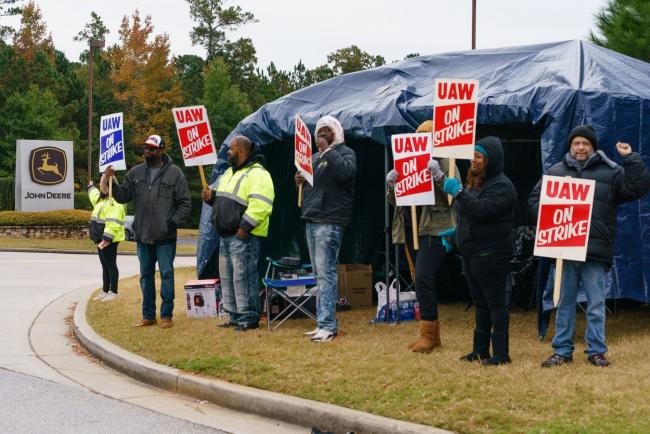