(Bloomberg) -- Cargill Inc and Deutsche Bank AG (NYSE: DB ) are among a group of major foreign companies under probe in Taiwan for speculating on the surging local currency last year, hindering the central bank’s efforts to rein in a rampant foreign-exchange market.

Eight of Asia’s leading food traders, with the help of six overseas banks, built a combined $11 billion in their Taiwan dollar deliverable forwards positions as of the end of July, the central bank said in a statement last week. Cargill and Louis Dreyfus Co. were involved, along with Deutsche Bank (DE: DBKGn ), Citigroup Inc (NYSE: C )., JPMorgan Chase & Co. (NYSE: JPM ) and Standard Chartered (OTC: SCBFF ) Plc, according to people with knowledge of the matter, who asked not to be identified because they are not authorized to speak publicly.

ING Groep (AS: INGA ) NV and Australia & New Zealand Banking Group (OTC: ANZBY ) Ltd. are also being investigated, according to a person familiar with the situation.

The positions were based on overseas physical grain trades deliberately transacted via their Taiwan units to speculate on the local currency, affecting market stability, the central bank said. The companies, which the central bank has not identified, had ceased the trades by the end of July last year. The central bank will announce punishments for four of the banks soon. It has already settled with two other lenders.

The monetary authority can’t sanction the grain firms but is preparing to hand over detailed information about the case to other government agencies, such as the finance ministry and the main financial regulator, to allow them to further investigate the companies.

At least some of the trades were specifically designed to profit from the rising Taiwan dollar, the people familiar said, presenting a direct challenge to the central bank as it battled to contain a rapidly rising currency in its efforts to maintain a stable financial environment for its export-dependent economy.

Taiwan’s central bank tightly regulates how much Taiwan dollars foreign companies can accrue to avoid speculation on the currency. It said the huge positions the commodity companies built up in deliverable forwards went beyond their actual business needs, according to a statement last week. None of the commodity trades behind the forward positions, nor the principle parties involved, were in Taiwan, it said.

“Speculation is typically frowned upon by the central bank as it could destabilize markets and distort pricing,” Christopher Wong, a senior foreign-exchange strategist at Malayan Banking in Singapore, said in a message. “The punishment aims to send a deterrence message and the central bank can use this as a means of ‘reminding the markets’ not to be a menace.”

The central bank didn’t comment beyond its statement when contacted by Bloomberg News.

The Taiwan dollar strengthened more than 6% in the 12 months leading up to July 31 last year, the biggest gain among Asian currencies. It has continued to appreciate since, triggering ongoing interventions the central bank governor Yang Chin-long insists are merely intended to “smooth” the gains to maintain financial stability. The U.S. responded by putting Taiwan back onto its watch list of potential currency manipulators in December and urging its central bank to allow the local dollar to appreciate further.

The case disclosed an unusual source of profit for multinational traders, whose fortunes are traditionally built from their massive control over the physical supply chains in the vast and often opaque global market in food and raw materials.

The main point of contention is related to re-exports. Global companies move goods between different countries for various purposes -- processing, storage, distribution or delivery. Some make use of facilities in different countries as part of their trading operations.

The companies intentionally created exposure to the Taiwan dollar during these trades, with their Taiwan-based units building up deliverable-forwards positions with their banks based on the deals, the central bank said. The commodities never entered or exited Taiwan, while payments were handled by the traders’ offices outside of Taiwan.

The eight traders piled up a combined $11 billion in transactions between July 2019 and July 2020, according to the statement. The amount was equivalent to almost 4% of Taiwan’s total imports last year, data compiled by Bloomberg show. 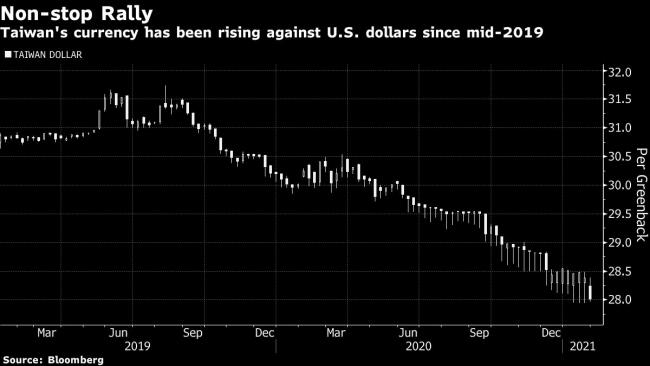