(Bloomberg) -- The recent wave of relief across the retail industry is giving way to a sense of foreboding ahead of Black Friday and the holiday shopping season.

Shoppers helped companies such as Macy’s Inc. avoid the worst-case scenario in the third quarter, loading up credit cards to absorb higher prices for food and household items while taking advantage of steep discounts for overstocked TVs and furniture. And while results from retailers including Abercrombie & Fitch Co. and Best Buy Co (NYSE: BBY ). exceeded forecasts, sales were still down -- the contraction just wasn’t as bad as expected.

That’s in large part because retailers offered promotions earlier than normal this year to clear through excess inventory. But executives voiced caution and repeatedly referred to economic uncertainty. And the cost of unloading piled-up inventory, while still dealing with inflation and staffing challenges, is expected to put pressure on profits.

Add it all up and the US economy is looking at the bleakest holiday outlook in recent memory, with sales that will struggle to top the record-setting levels of the past few years. Apparel companies across the board are conservative about expectations for the fourth quarter, citing an uncertain environment and declining sales activity in late October and early November.

“Management teams will be looking at the numbers daily in the fourth quarter,” said David Shiffman, co-head of consumer retail at Solomon Partners, of retailers’ concerns about sales performance over the holidays.

Overall spending this holiday season is seen growing 2.5% from a year ago, compared with 8.6% last year and a whopping 32% in 2020, according to data from Adobe (NASDAQ: ADBE ) Inc. Those figures aren’t adjusted for inflation, meaning that sales could be down by volume.

The challenges are especially acute for brands that cater to lower and middle-income consumers, who have become more cautious when it comes to spending on discretionary items. At Abercrombie & Fitch, for example, the higher-priced namesake brand reported growth in third-quarter net sales while the lower-cost Hollister brand posted a decline.

“We have been seeing a real bifurcation between our brands and the consumers that shop our brands,” Abercrombie Chief Executive Officer Fran Horowitz said in an interview. “Mid-second quarter really saw the Hollister customer stepping back. This year they were definitely pressured by inflation controlling what they’re choosing to spend on.”

On the flip side, higher-income shoppers are still spending. That trend was illustrated in results at Macy’s-owned Bloomingdale’s and Gap Inc (NYSE: GPS ).-owned Banana Republic that were better than those at the parent companies’ lower-cost brands.

“Higher-income households saved more than others and are far less sensitive to rising prices,” Moody’s Investors Service analysts said in a report, noting that the top 40% of the income distribution has 4.5 times more savings than they held prior to the pandemic. “As a result of their wealth buffer, they have continued to spend, especially on services like leisure and travel.”

Consumers still plan on spending: More than three-quarters of customers expect to shop as much as or more than in 2021 on the holidays, and 85% said they will do at least some of their holiday shopping over Black Friday, according to survey data from Placer.ai, a location-analytics firm that tracks foot traffic.

But some consumers are relying more on credit and buy-now, pay-later options than they did a year ago, likely a reflection of a drop-off in the savings rate. Macy’s said last week that customers are building larger balances on credit cards.

A US recession -- which an increasing number of economists have warned may be imminent as the Federal Reserve keeps raising interest rates in an effort to curb inflation -- may have a wider impact on spending across the income spectrum.

“With savings rates now well below pre-pandemic levels and volatile stock markets diminishing household wealth, the risk of a sharper slowdown in private spending will increase if inflation does not decline from current levels,” said Claire Li, vice president of credit strategy at Moody’s Investors Service. 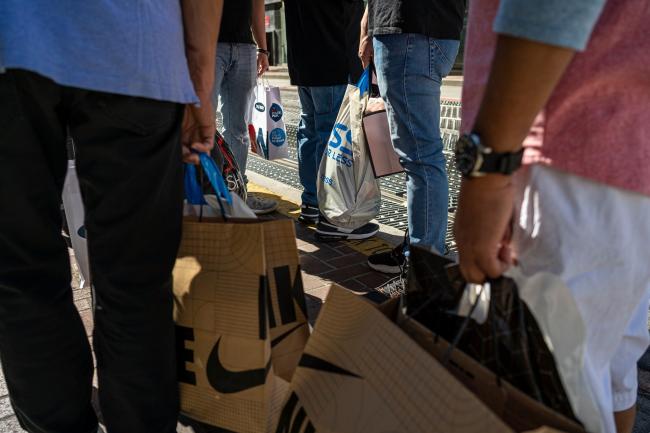