Bitcoin continued its climb toward all-time highs, bolstered by optimism over the upcoming launch of the first Bitcoin futures exchange-traded fund in the U.S. by asset manager ProShares.

The largest cryptocurrency rose as much as 2.6% Tuesday to trade around $62,961. It’s more than doubled this year in volatile trading. The April record is just under $64,870.

ProShares plans to start the fund on the New York Stock Exchange Tuesday. The move is the latest sign of how cryptocurrency-related investments are becoming more mainstream.

The prospect of increased interest in Bitcoin from institutional and retail investors is bolstering the token, whose 2021 climb dwarfs the returns from traditional assets like stocks, bonds and gold . That’s a marked change from mid-year, when worries about its energy usage and a harsh crypto crackdown in China sent prices tumbling below $30,000.

“So far in October, Bitcoin has crushed all the other crypto indexes, signaling that the Bitcoin season has started,” wrote strategists in an Arcane Research report. Meanwhile, global open interest denominated in the cryptocurrency has increased by 23%, they said, marking the fastest 18-day increase in more than seven months. Futures contracts on the Chicago Mercantile Exchange have led the way in the rise in open interest and sit near record highs of almost $4 billion.

Other coins are also up so far this week, including second-largest token Ether. The Bloomberg Galaxy Crypto Index is hovering around the highest levels since May.

The futures-based Bitcoin ETF could attract more than $50 billion in inflows in its first year given the hype around it, according to noted Bitcoin bull Tom Lee, co-founder of Fundstrat Global Advisors.

“Bitcoin is in a strong position as it challenges last resistance at $64,000 above which a breakout will target $100,000,” said Rich Ross, technical strategist at Evercore ISI. “The fourth quarter offers fertile ground for the most speculative.”

Meanwhile, Grayscale Investments LLC said Tuesday its filing as soon as Tuesday to convert the world’s biggest Bitcoin fund into an ETF. While the Securities and Exchange Commission has allowed a derivatives-based product to launch, it has yet to permit the kind of structure used by Grayscale, which directly holds the largest cryptocurrency.

Grayscale’s filing will start a window for the SEC to reject or delay the GBTC conversion application. Michael Sonnenshein, the asset manager’s chief executive officer, has stated the firm is “100% committed” to turning GBTC into an ETF as soon as U.S. regulators allow.

(Updates markets from the second paragraph.) 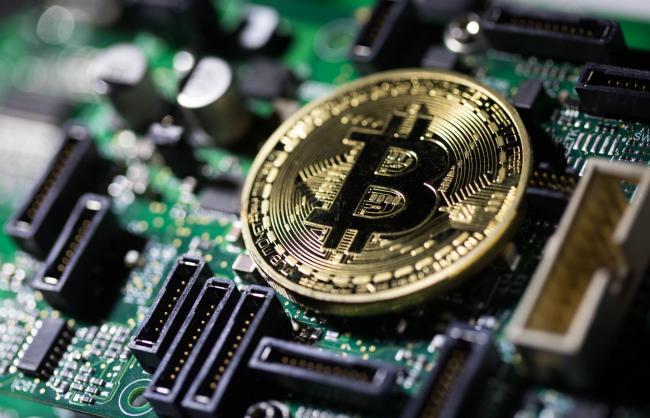