(Bloomberg) -- Asian stocks fell the most since March as losses in technology shares deepened amid a global selloff triggered by rising Treasury yields.

Taiwan Semiconductor Manufacturing Co., Samsung (KS: 005930 ) Electronics (OTC: SSNLF ) Co. and Tencent Holdings (OTC: TCEHY ) Ltd. contributed the most to losses in the MSCI Asia Pacific Index, which dropped as much as 3.2%. A gauge of the region’s technology stocks tumbled more than 4%, also the most since March.

Friday’s selloff marks a sharp turnaround for equities which rallied for the most of January and February, pushing the Asian benchmark to a fresh record high. Equity benchmarks in South Korea, Taiwan and Japan slumped more than 3% each this Friday.

“This rise in risk-free rates serves as a trigger to investors who have been looking for a reason for an equity market correction,” said Tai Hui, chief Asia market strategist at J.P. Morgan Asset Management. “The Asian tech sector and outperformers of the past 12 months may also mirror the sharper correction of their US counterparts.”

The slump called to mind the painful episode for the region between May and June 2013 when the U.S. Federal Reserve suggested it would start slowly tapering its quantitative easing program and rattled global stocks. Asian shares were especially hard hit then, plunging 13% from a high hit in May, versus a 6% peak-to-trough decline in the S&P 500 .

On the positive side, central banks in Asia’s emerging economies added $467.7 billion to their foreign-exchange reserves last year, the most since the 2013 temper tantrum. That provides Asia with an important buffer against a recent jump in global bond yields.

“An analogy to the taper tantrum in 2013 and its impact on Asian markets versus the U.S. is misplaced,” said Thomas Poullaouec, head of multi-asset solutions at T. Rowe Price. “In 2013, Asian markets as well as emerging markets in general were a primary target of the rising yields given their vulnerability in their financing needs.”

Poullaouec said that Asian countries are no longer as fragile as they were perceived in 2013, adding that the stocks that will be hit by higher yields will be those “in the most expensive part of the market” including growth names. 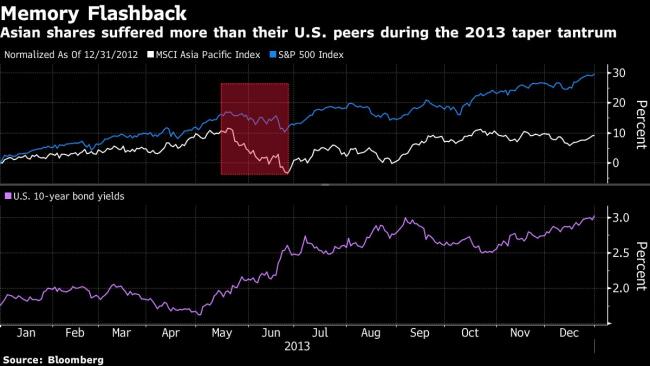