The famed valuation guru Aswath Damodaran had valued Zomato (NS: ZOMT ) at Rs 41/share during its IPO and faced a lot of criticism from the market especially when there was so much euphoria around Zomato’s IPO. The IPO received a stellar response and was subscribed more than 38 times. It opened at a substantial premium to the offer price of Rs 76 and went on to touch a high of Rs 169. However, we all know what has happened since then. Zomato’s stock price has been falling like a pack of cards and is currently hovering around Rs. 46, wiping out about Rs 97000 crores of investors’ wealth since its listing.

Worries around monetary tightening and investor concerns about loss-making startups have weighed heavily on several tech-based IPOs of last year. Out of them, Zomato has been among the worst performing IPOs of 2021 along with PayTM with the share price down more than 75% from its all-time highs.

What led the stock to fall this sharp? 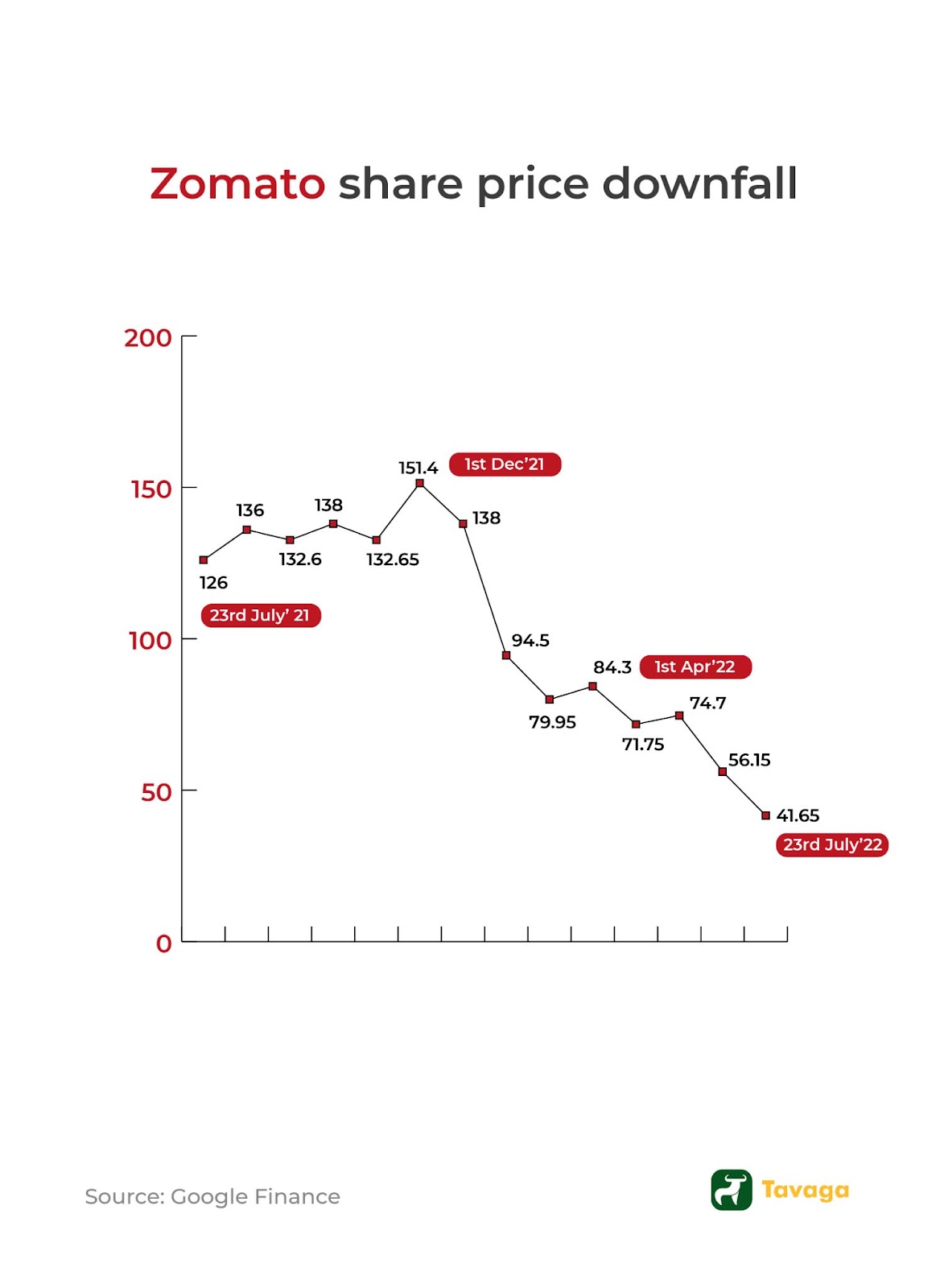 This week Zomato’s share price fell about as One year lock-in period for pre-IPO investors ended. These were the promoters and employees who held 613 crore shares of the company. Anchor lock-ins and deep selling pressures on the stock once these lock-ins end have not been new. As per an Edelweiss report, 51 companies came out with an IPO in 2021 of which 76% of them experienced selling pressure on the anchor lock-in expiry date. In 61% of the cases, selling continued for almost a week.

But why are promoters and employees exiting Zomato?

It is a sign of alarm that employees and promoters are not trusting the business and are not confident about the company’s prospects. But why is that so?

There may be many factors that led to this decision:- 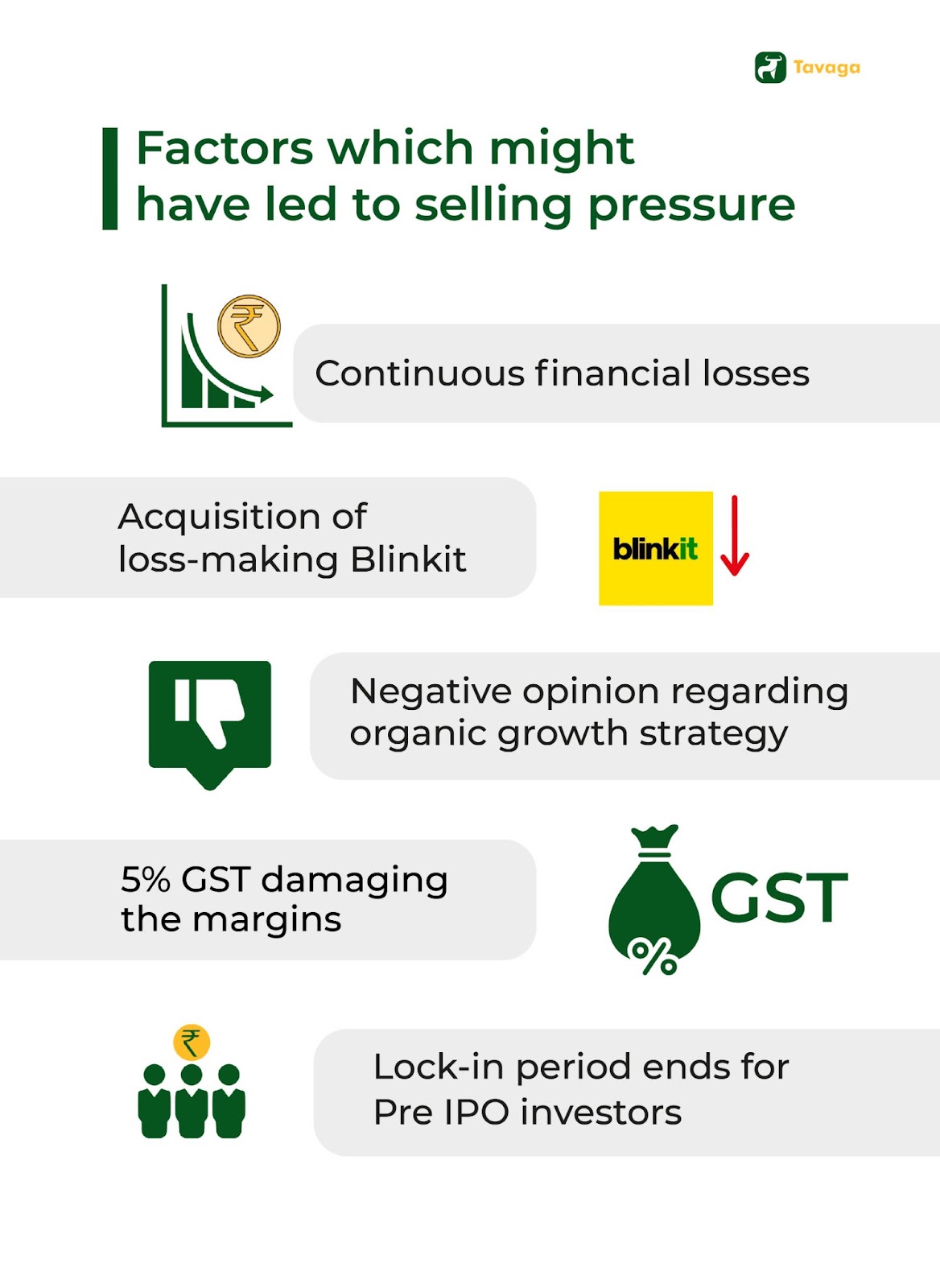 As far as the numbers are concerned, Zomato seems to be in deep deep trouble. From 2018-2022 revenue increased from just Rs 371 crores to Rs 3611 crores during the same time its losses have been exploded by 14 times from just Rs 78 crore to Rs 1098 crore. Every time Zomato tried to become profitable it has nothing but lead to outrage. They first tried to launch Zomato gold to lock in customers but that lead to enormous losses for restaurants which forced them to bring this service down. Then they tried to increase the prices of dishes that made the customers unhappy. So from the outside, it almost looks like that company is stuck in a vicious circle of cash drain which is nothing but leading to more and more business losses.

Quick commerce to continue to be a drag: Zomato’s acquisition of Blinkit looks more like a desperate decision to protect its space in the quick commerce business. Quick commerce is however a tough nut to crack with no visibility on profitability, low margin, and high competition. There is stiff competition from the likes of Tata’s BigBasket, Amazon (NASDAQ: AMZN ), JIO Mart, and Zepto and Dunzo which will make it even more difficult for Zomato to make money in this division. Zomato has itself guided that it will invest $400 million in Q-commerce over the next 2 years with no near-time value accretion.

However, not all is bad for Zomato

Zomato holds its position: The food delivery market in India has continued to grow post-pandemic and Zomato has been able to maintain its market share at around 45%. In fact, the market has been consolidating with both Zomato and Swiggy controlling 90% market share. We can thus expect Zomato's gross order value and revenues to remain healthy.

Focus on cash conservation and unit economics: In order to cut down losses, Zomato has now started focussing increasingly on better unit economics and is expecting to break even in the food delivery business in some time. Ebitda losses continued to decline for Zomato for the last 3 quarters and gross order value (GOV) saw strong growth due to a pick-up in orders.

Operating leverage to start kicking in: With strong revenue growth expected in the coming quarter, Zomato will benefit from operating leverage as revenues will grow faster than the fixed costs. Revenue growth is expected to remain upbeat on the back of record average monthly transacting customers during 4Q FY22 and strong average monthly active restaurant partners and delivery partners. With covid concerns ebbing, revenue growth is expected to remain robust in the coming quarters too.

Zomato Kitchen has the potential to become a cash cow: Zomato’s cloud kitchen business can become a cash cow if Zomato can capitalize on the enormous data it has about the food preferences of consumers. This could certainly give them an edge over other peers.

Zomato’s Hyperpure allows restaurants to buy everything from vegetables, fruits, poultry, groceries, meats, and seafood to dairy and beverages. It claims to be working directly with farmers, mills, producers, and processors to source these products.

Zomato’s Hyperpure has now a presence in 10 cities and has supplied to more than 34000 unique restaurants.

What Should Investors Do?

Disclaimer: This is for educational purposes and investors must consult investment advisors before investing.