The paint industry in India has been in the news of late, mainly because of Grasim’s expected entry into the sector and the disruption it may cause. The Indian paint industry has high entry barriers with dominant existing players. Will Grasim (NS: GRAS ) with its massive money muscle of Rs. 10,000 crores carve out a space in an already competitive industry or will Asian Paints (NS: ASPN ), the giant behemoth in the Indian paints industry be able to keep its fortress amidst weak demand and dwindling profits? Let's dig deep.

Investment Thesis
Asian Paints has shown impressive sales growth over the last few years and has very low debt in its capital mix. It has a robust distribution network consisting of over 70,000 dealers, which are spread all over the country. The stock price has corrected by 21% since the start of the year, mainly because of an expected rise in competition and increasing oil prices. It is trading at a PE of 86, with the industry PE of 65. The premium for the stock is justified by its returns over the long term and its historical performance. The company has outperformed the market over the last few years and has robust growth prospects for the future. Moreover, industry experts have pointed out that it will be challenging for Grasim to carve out a space for itself, especially due to high entry barriers and dominant existing players, especially Asian Paints, which commands a market share of over 50%. 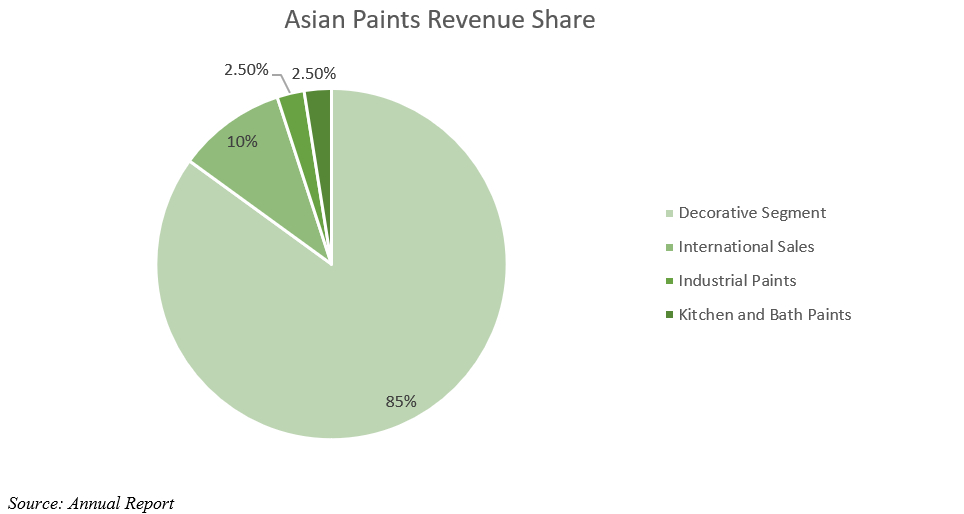 Asian Paints is India’s largest and the world’s 9th largest paint company, with over ₹28000 crores in revenue. It operates in over 60 markets with 26 manufacturing facilities worldwide. The company is known for its strong distribution networks, which consist of over 145,000 retail touch points in India. The company has grown significantly since its operations started more than five decades ago. During this period, it has consistently performed well and has given healthy returns to its investors. 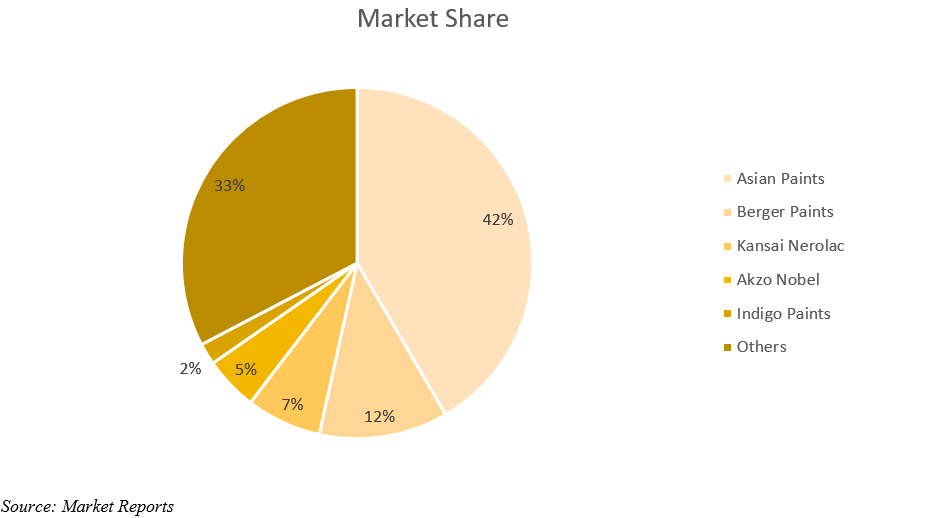 The Indian paint industry, by various estimates, is worth over $8 billion. The industry has high entry barriers and is dominated by a few big players. The industry is expected to grow by double digits in the next few years with a major push by the government in the housing and infrastructure space. Major players in the paint industry are Asian Paints, Berger, Kansai Nerolac, and Akzo Nobel, which control over 80% of this industry. The entry of Aditya Birla Group with an investment of Rs. 10,000 crores may drastically impact the sector. However, it will take them some time to build their distribution network, which is essential for growth in this space.

The Indian paint industry is one of the largest in the world. Rapid urbanization and high economic growth will give this sector an impetus as more and more houses are built both by private individuals and government-sponsored housing schemes. Shortening repainting cycles will also boost the demand for paint. Keeping this in mind and the pole position of Asian paints in the industry, it is evident that the company will grow in the long run. However, investors must be careful and consider both the upsides and downsides before investing or consult a SEBI Registered Investment Adviser before investing in this stock.


Disclaimer: The above analysis is just for informational purposes. It shouldn’t be taken as a recommendation.