Analyzing any IT or FMCG company has its metrics clear in terms of growth, EBITDA, P/E ratio, Debt to Equity ratio, etc. The same is, however, not true for Banking Stocks. Banks have a completely different revenue model which includes accepting deposits and lending loans as their primary activities.

Hence a distinct business model requires different matrices, other than the usual ones to perform a sectoral analysis. Accepting savings, current, and fixed deposits, and providing long-term or short-term loans calls out for specific parameters to get looked upon for comparative analysis.

Here are a few bank-specific parameters that need to be considered primarily while analyzing any banking stock for a buy or sell call. We have analysed all the leading private sector banks on these parameters.

As both savings and current account attracts low rates of interest as compared to fixed deposits, it's comparatively a cheaper source of funds for the bank. Hence, it is favorable to have a higher CASA ratio as it shows that banks have to pay lower interest for acquiring and using those funds. A Higher CASA ratio would therefore imply higher Net Interest Margins for the banks. A growing CASA ratio is an important metric for analyzing a banking stock.

In terms of the CASA ratio, Kotak Mahindra Bank Ltd (NS: KTKM ) leads in the private bank space with the highest CASA ratio while other prominent banks score much lower. 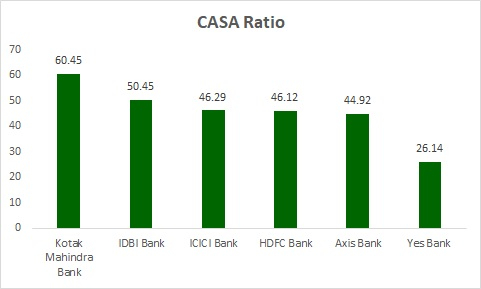 The banking business is a business of lending and borrowing where trust remains the concluding factor. Bank lends the majority of what it accepts and earns interest on it, but what if the loans are never repaid? Well, it's the ability of the bank to scrutinize the customer and his capacity to repay that makes it a profitable one. Though the loans are allotted after due diligence only, there exists a risk regarding repayment and fraud. And since banks generate interest out of the loans, it becomes an asset for the bank and the defaulted loans are called Non-Performing Assets. It's an indicator that suggests what portion of the bank's lending has turned into bad debt. Hence while evaluating a bank, a close look must be provided at its increasing or decreasing NPA numbers. A decreasing NPAs suggests that the banks are being more prudent while lending which consequently impacts their profitability.

NPAs are degrading factors for a bank and hence banks with weak financials have higher NPAs which is depicted by the following chart as YES bank is leading the numbers. 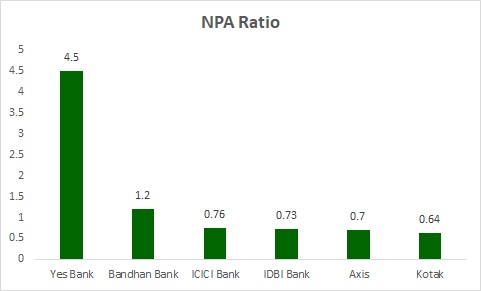 Capital Adequacy Ratio shows the ability of the bank to absorb the defaults into its lending system. It's a great measure for depositors to analyze whether their funds are safe with the banks and also helps in keeping a watch on its lending system. It promotes stability in the financial system of the bank. Banks with high CAR should be preferred as it suggests that the bank can absorb unforeseen losses due to adequate availability of funds. In India, currently, Bandhan Bank (NS: BANH ) has the highest CAR of 23.47% followed by Kotak bank with 22.26%. 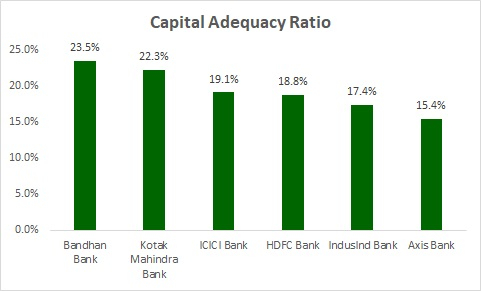 Banks provide interest for deposits and also charge interest for the loans. The difference between both is the profit for the bank which is called Net Interest Income. Accepting deposits and lending are the primary functions of banks and therefore Net Interest Income forms the major source of a bank's income. It is thus an important metric to analyse before investing in a banking stock. A growing NII is a positive indicator depicting the strong financials of the bank and makes it a strong contender for investment. IDFC (NS: IDFC ) First Bank boasts of the highest NII growth in the private banks pack this quarter.

Net Interest Margin (NIM) on other hand is evaluated by dividing the NII by income from interest-producing assets. It shows a true picture of a bank's earnings from interest income. A combination of both growing NIM and NII is the biggest green flag for investment purposes with Bandhan Bank leading the pack in both the parameters. 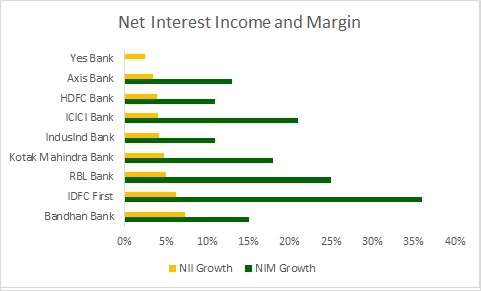 As against the P/E ratio where the price of a stock is compared to its earnings, in the P/B ratio, the price of a banking stock is compared to its book value as generated from its balance sheet. Since the bank's assets and liabilities are periodically marketed to current market rates, it represents the fair market value for evaluating the banking stock. Price to Book Value measures the value of bank compared to its equity book value. Ideally, it should be close to 1, but a higher P/B indicates the investor's trust in management in generating more value from the given assets. That makes the stock an overvalued one whereas, a below-1 P/B ratio could either be due to financial challenges or high Non-Performing Assets or could also be a good undervalued stock for value investors.

Here are some banks with their respective P/B ratio with ICICI Bank (NS: ICBK ) the highest valued and Yes Bank (NS: YESB ) the least valued among the private banks pack. 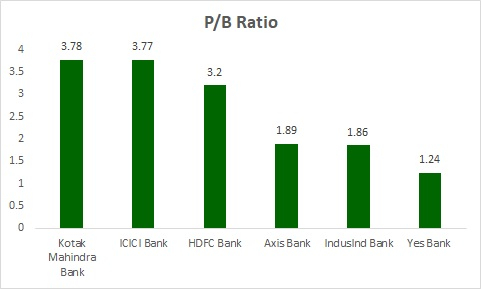 So which Bank stocks should feature in your portfolio?

Recent Covid restrictions and recession approaching the economy have kept banks expecting unforeseen NPA hikes and lowering Net Interest Income. Moreover, banks like Yes Bank and Bandhan Bank are witnessing continuous loan defaults from weakening sectors like Aviation, Hospitality and Entertainment. Such external factors have affected the overall banking sector in the last couple of years. Yet, IDFC First Bank Ltd (NS: IDFB ) and RBL Bank Ltd (NS: RATB ) clocked a 36% and 25%  Net Interest Income growth that differentiates them against the whole sector. But when it comes to analysing the banking peers, a head-on-head comparison should be made by considering all important factors. Judging a bank stock by getting impressed by a single parameter is never recommended as one factor cannot tell the whole story. It is always advised to do thorough research of all important metrics before investing. It is recommended to consult a SEBI Registered Investment Advisor before you decide to invest in the markets.

Disclaimer: This article is purely for educational purpose and should not be construed as a buy/sell recommendation.