During 2021, China has been beta testing a digital yuan . Though it hasn't officially been rolled out yet, in November, Chinese e-tailer JD.com (NASDAQ: JD ) announced it would be accepting the e-CNY for payment on its platform during Singles Day. According to reports, as of Nov. 11 more than 100,000 customers had used the digital version of the currency.

Countries worldwide have been talking up plans to embrace fintech by rolling out digital currencies. The US Fed and Treasury have studied the steps necessary to digitalize the dollar. In one of his post-FOMC press conferences, Fed Chairman Jerome Powell told the markets the most critical factor for a digital dollar is to “get it right.”

But government agencies move at a snail’s pace. The US is already a digital economy in many ways, with credit and debit cards having replaced cash. Paying via smartphones is another method that has gained acceptance. Fewer people now carry cash, and coins have become even less significant.

Meanwhile, rising prices because of inflationary pressures make it hard to believe that the largest US denomination in circulation is the $100 bill. It is only a matter of time until the US releases a digital dollar. Still, the world’s leading economy appears to be behind other countries when it comes to embracing fintech.

A golden year for the leading cryptos

As of Dec. 17, even though Bitcoin and Ethereum , the cryptocurrency leaders, experienced bearish reversals on their daily charts on Nov. 10—leading to lower prices—they still posted impressive gains in 2021. 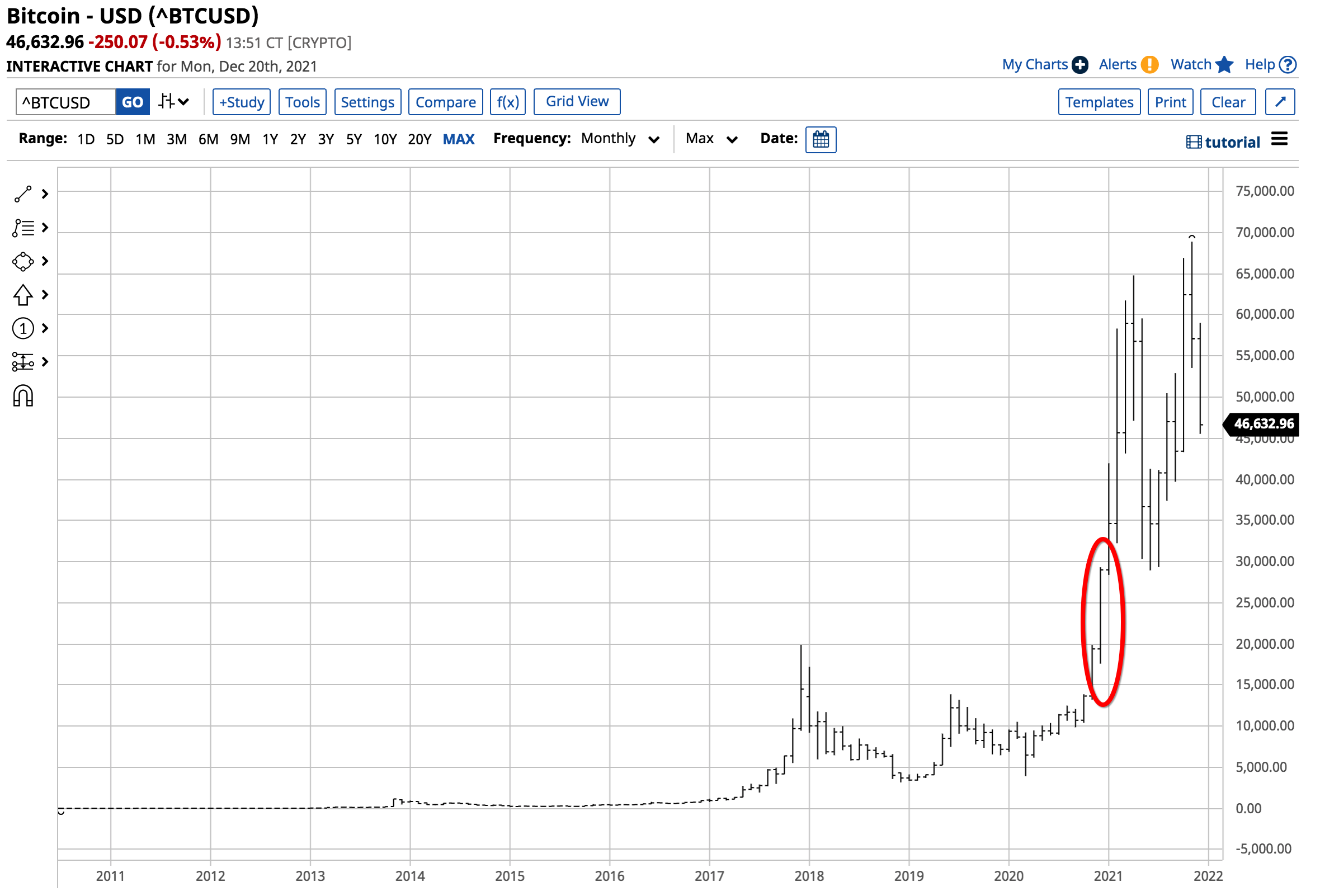 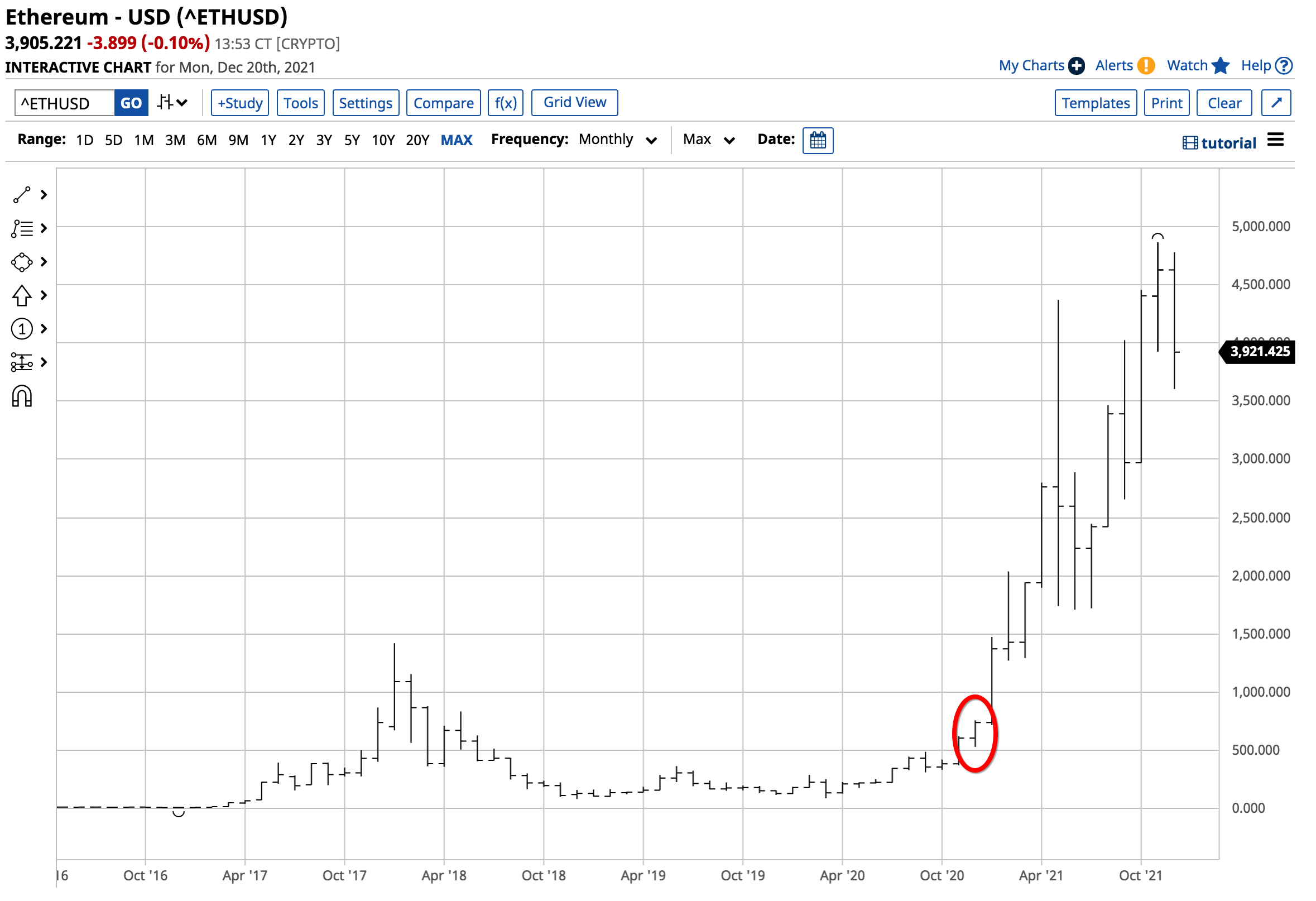 Meanwhile, the overall market cap of the crypto asset class was at the $767.482 billion level at the end of last year. At $2.203 trillion on Dec. 19, it was over 2.87 times higher, outperforming Bitcoin but underperforming Ethereum this year.

The bottom line is the asset class has increased its critical mass. While the growth is likely a sign of decreasing faith in a variety of cryptocurrencies, it is also a commentary on the rise of global fintech, replacing the financial status quo.

Though cryptocurrencies have a growing number of supporters, they also have an array of detractors. Emotions run high when it comes to the burgeoning asset class. Global currencies with values determined solely by buying and selling in the crypto market, remove power from governments and central banks that can increase or decrease the money supply to stimulate or inhibit economic growth.

The evolution of the crypto revolution has created an ideological divide that pits libertarianism versus the status quo which supports the government and traditional banking control of domestic and global financial arenas.

Blockchain is the future of fintech

While there may be an emotional divide surrounding cryptos, there is widespread consensus about blockchain. A blockchain is a system of recording information that makes it challenging or impossible to change, hack, or cheat the network. Each block in the chain contains a number of transactions, and every time a new transaction occurs, a record of that transaction is added to every participant’s ledger.

Blockchain technology was first outlined in 1991 by Stuart Haber and W. Scott Stornetta, two researchers who sought to implement a method to prevent tampering with document timestamps. Blockchain and cryptocurrencies go hand-in-hand as the original Bitcoin white paper written by the elusive Satoshi Nakamoto devised the first blockchain database.

As blockchain technology was described in 1991, it is clear that it preceded cryptocurrencies. Still, digital tokens have made it the backbone of finance as blockchains improve transaction speeds and record-keeping efficiency. Companies and governments have invested massive capital in embracing fintech and blockchain technology over the past recent years.

The US dollar is the world’s reserve currency, meaning central banks, governments, and monetary authorities worldwide hold the US currency as reserves. Reserve currencies are freely convertible, stable, and reflect the economic landscape in the country that issues the legal tender.

Like all national currencies in circulation today, the US dollar is a fiat currency, meaning it derives value solely from the full faith and credit of the United States of America. The government can increase or decrease the supply of dollars to address economic changes. Governments tend to cooperate in foreign currency markets in the interest of stability. They routinely intervene, buying or selling dollars, euros, yen, pounds, and other currencies to prevent extreme volatility as the global payments system depends on exchange rate stability.

Technology has changed most aspects of our lives over the past decades. Today, fewer people carry cash and change in their pockets; they pay for goods and services with credit and debit cards. Moreover, it is impossible to use bills and coins to pay for e-commerce products.

Progress on a digital dollar

The US Federal Reserve has been studying the creation of a digital dollar. Newly nominated Fed Vice Chair Lael Brainard has called on the central bank to develop a digital US currency urgently. In July, she said that she:

“cannot understand why the US is not actively developing a central bank digital currency when China and other countries are.”

“I see both pros and cons to doing it. And my own mind is not made up about this.”

While the Fed has studied the potential for a digital dollar, there has not been real progress in embracing fintech and the evolution of the technological, financial revolution. The US may be the wealthiest country with the most influential fiat currency, but the lack of progress and consensus is troubling as other countries are on the verge of releasing digital currencies.

The Chinese economy has grown to a point where it now challenges the US for global leadership. China has already entered the second phase of cross-border digital yuan trials. China and Hong Kong are both testing the use of the digital yuan.

As China and other countries embrace blockchain technology and digitalize their currencies, the US risks being left in the dust. Chinese officials are calling for the digital yuan to serve as the regional currency across Southeast Asia, threatening the dollar’s position as the world’s reserve currency.

The US is now facing the need for a reactive rather than a proactive approach, with US central bankers, Treasury officials, and elected leaders stuck in neutral. If they wait too long, they could see the power of the US currency decline. When it comes to technological advances, you tend to lose when you snooze.

The ascent of cryptocurrencies is a trend that warns that a growing number of individuals are losing faith in fiat currencies. However, it is also a sign that fintech is the technological evolution of finance. The US needs to get into gear quickly regarding a digital dollar program or risk losing its global reserve currency status.