We anticipate another volatile week, as investor sentiment fluctuates between satisfaction on the Federal Reserve's so-far mild tightening, in order not to upend the US economy versus worries that to curb still-escalating inflation, the central bank may have to adopt a more hawkish stance than it had originally anticipated.

As well, expect Russia's ongoing invasion of Ukraine to remain the focus of headlines, though traders are likely to also begin paying more attention to the growing COVID contagion in Europe along with virus-related shutdowns of Chinese cities.

The Dow Jones Industrial Average and the Russell 2000 —the two major US indices representing value shares—lagged, each gaining about 5.5% for the week. 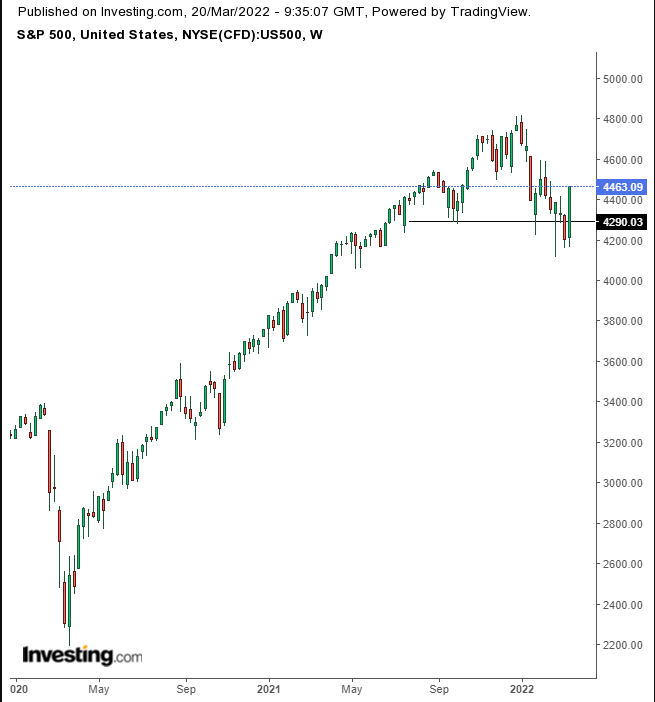 The broad benchmark vaulted back above the neckline of an H&S top. If the SPX keeps rising, it could blow out what would have been a top, turning it instead into a continuation pattern heading higher.

The past week's outperforming sector: Consumer Discretionary , a segment whose stocks do well when consumers are confident about their jobs and salaries. Consumer discretionary shares outperformed, soaring 9.09% for the week.

However, the most significant influencer among stocks on the S&P 500 was the Technology sector which leaped 7.64% over the same period. As a result, the tech-heavy NASDAQ 100 outperformed—leading peer indices as it added 8.46% of value for the week. And, since higher interest rates will enhance bank profits, Financials also finished the week significantly higher, +7.14%.

Energy was the only sector to close the week in the red, down 3.6%, tracking retreating oil prices lower.

During the coming week, starting with Chair Powell's appearance at an economics conference on Monday , planned speeches by more than a dozen Fed members will allow for fine-tuning of the overall central bank message. The Fed boss will also participate in an international banking conference on Wednesday.

Some analysts insist that, since the first rate hike is behind us, the worst is over and investors will continue driving up stocks for a second strong week. However, from experience, we also know that the market narrative can be inconsistent, not to mention investor sentiment which can be surprisingly fragile, meaning risk on appetites and could just as quickly turn timid.

We've been surprised at how easily investors "bought into" Powell's policy pivot after his repeated promises that inflation was transitory. We don't necessarily say this as a direct criticism aimed at Powell. It's his job, after all, to strive for stable prices. And part of that is being the economy's cheerleader. However, it's our job to remind readers that he's flip-flopped on Fed policy before.

It's also our job to note that traders can be mercurial, sometimes hearing only what they want to hear. Indeed, they've so far ignored Fed members whose remarks didn't necessarily meet the market's approval. Case in point: St. Louis Fed President James Bullard and Fed Governor Christopher Waller both said on CNBC that they want to raise interest rates faster than the median seven hikes the Fed expects for this year, but markets still finished the week on a buoyant note.

At the same time, the war in Eastern Europe grinds on, with no sign of an end. Along with fatalities, it's also causing economic disruption, by hampering global commodity supply, another hazard showing no signs of slowing down.

Should the situation persist—both lack of necessary commodities and the resulting price run-up on whatever is available—the Fed could be forced to raise rates more quickly than originally intended. Worse, the central bank will end up chasing inflation rather than getting out ahead of it, causing a more significant price ramp up.

Yields on the benchmark 10-year Treasury jumped past 2.1%, to the highest point since May 2019. Investors are selling off long-dated bonds in favor of newer bonds providing higher payouts, as interest rates are heading higher. 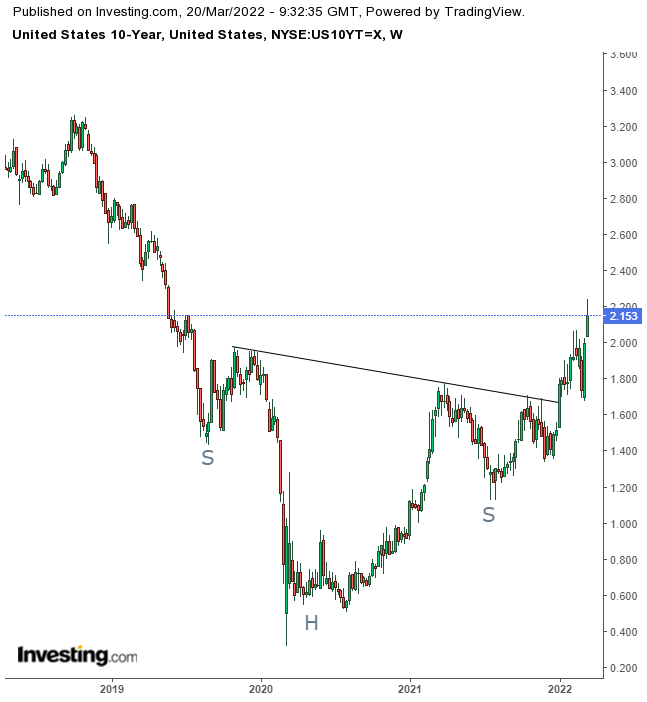 Rates completed a weekly H&S bottom, creating the momentum for yields to test the November 2018 highs of over 3%. Treasury yields are a leading indicator for Fed funds futures rates.

The dollar dropped for the week, ending a three-week winning streak for the greenback. 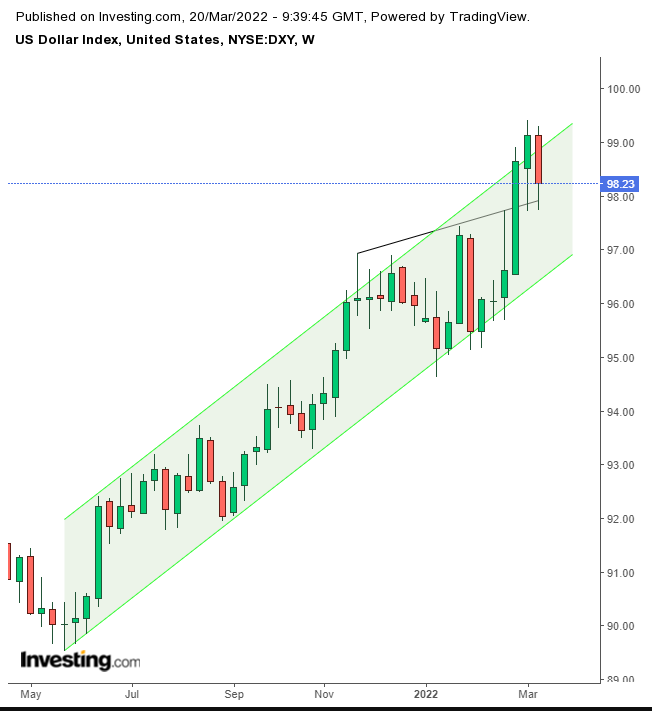 The USD could keep falling toward the bottom of its rising channel, and the neckline of the H&S continuation pattern, which might prove to be support for the global reserve currency for a second consecutive week. That would raise the odds of a continued uptrend.

Despite the weakening dollar, gold sold off. 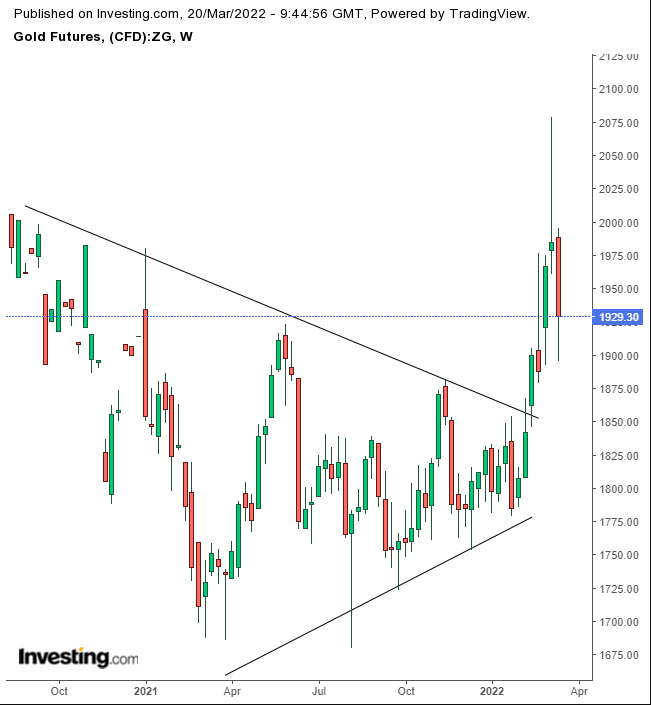 After reaching our target bulls are taking profit on the yellow metal even while investors have been increasing their tolerance for risk. The precious metal completed a weekly Evening Star, indicating that gold will continue to fall, potentially retesting the massive triangle developed throughout 2021. 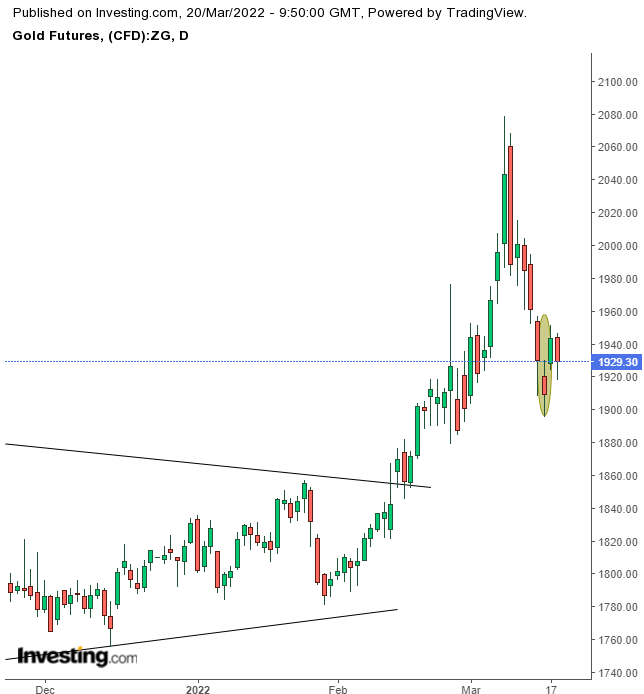 On the daily chart, gold produced a Morning Star, in play from Tuesday through Thursday, suggesting the price may have simply completed a "return move," and the precious metal will actually climb.

In this case, we have more faith in the weekly rather than the daily chart. Still, the price could rise according to the Morning Star pattern on the daily chart, albeit temporarily, before turning down, as the weekly chart suggests to us. 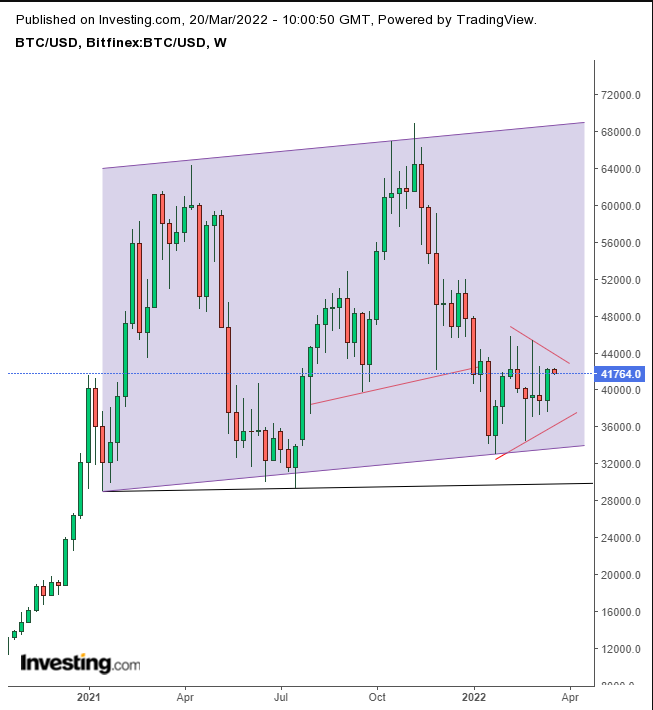 We've been bearish on the cryptocurrency since early 2022. The token is developing a symmetrical triangle, more likely bearish after completing an H&S top, whose implied target would achieve an even larger double-top.

After a week of wild swings, crude oil returned to, and remained, above $100, but we expect this to be temporary. 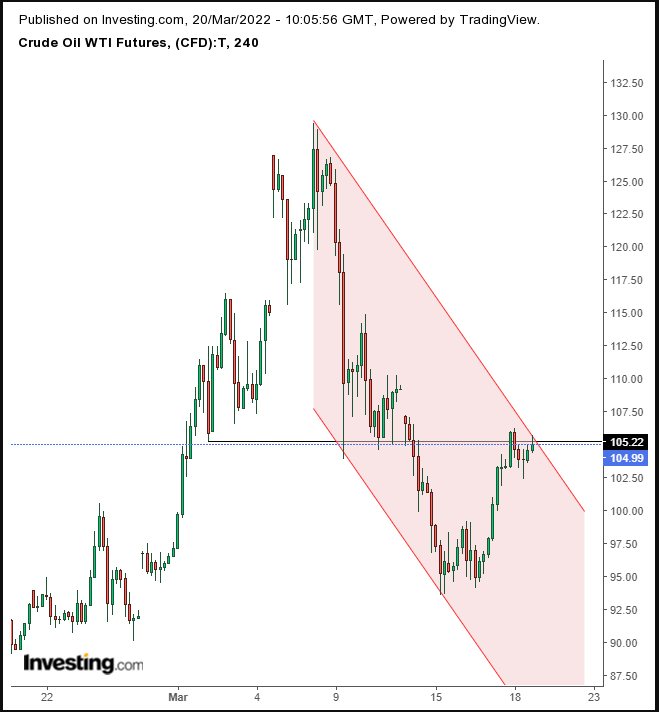 WTI found repeated resistance by the neckline of a 4-hour H&S top, suggesting a return move. Now, prices are more likely to return to declines. The pattern's implied target is as low as $80.