Though April is historically the best month for stocks from a seasonality perspective, ongoing market volatility triggered by an array of existing headwinds is likely to remain in play as the month begins.

Equity markets will continue to carefully watch the continuing Russia-fueled war in Ukraine even as "Ukraine said its forces had retaken all areas around Kyiv." Further pressuring stocks: the ongoing conflict is also driving up the price of a variety of commodities, including oil, fueling inflation that began during COVID lockdowns which caused a global supply crunch.

As well, COVID lockdowns in Shanghai have been extended as the outbreak in China's largest city escalates even as worries of another wave of the virus increase in Europe and the US. Americans are beginning to feel the pinch of the emergency rollback of stimulus for the pandemic. Plus, the Federal Reserve, after raising interest rates for the first time in years, could be on track to more aggressively tighten monetary policy after overseeing the most accommodative policy in US history, giving investors a severe case of withdrawal. And as if all that weren't enough, there's now talk of a possible upcoming recession building, as the closely followed 2-year / 10-year Treasury yield curve narrows, and even briefly inverted.

Stocks Finish Higher On Friday After Weak First Quarter Of 2022

Even if investors choose to ignore the list of significant risks, US major indices turned in a weak performance for the first quarter of 2022, the worst since the start of the pandemic. The Dow Jones Industrial Average lost 4.6% during the three month period, while the S&P 500 gave back 5% of value.

Still, during the month of March, even amidst choppy trading, investors managed to push stocks higher. Thus, despite the amalgamation of hazards, perhaps the S&P 500—which, since World War II has gained an average of 1.7% in April 70% of the time—might still turn in a positive performance during the upcoming month albeit with the possibility of pressure from future developments in Ukraine and US monetary policy shifts. 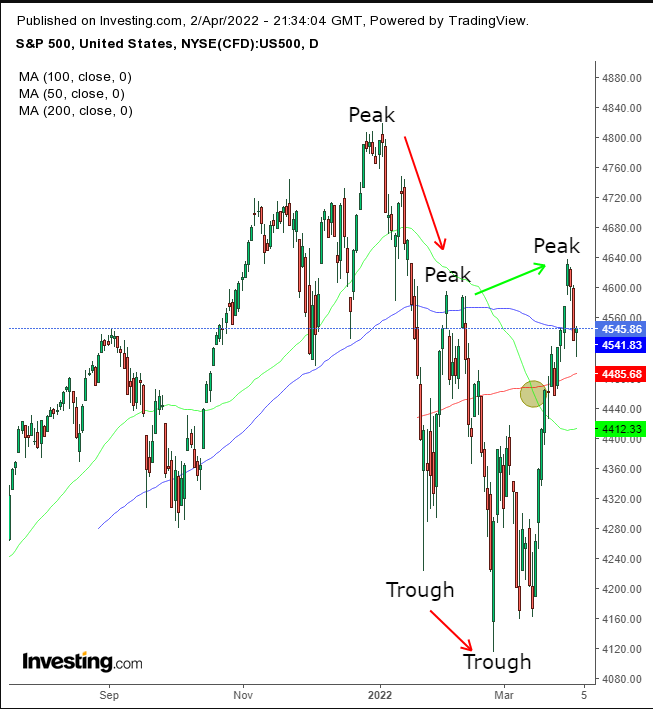 From a technical perspective, the S&P 500 has been trading sideways over the past quarter. After establishing a peak and trough downtrend, the March peak was higher than that made in February. At the same time, the index overcame the 200 DMA after its 50 DMA crossed below the longer MA, triggering a Death Cross.

The mega-cap Dow Jones chart was completely one-sided for the quarter. 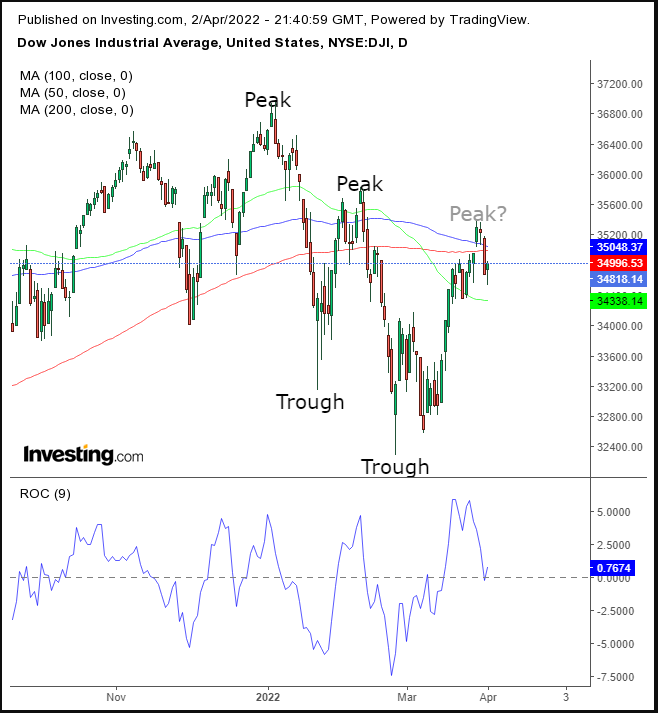 As opposed to the S&P, the Dow's peaks and troughs are in a decidedly descending format, and the price fell back below the 200 DMA. Finally, the momentum-based Rate of Change topped out. Each time this occurred on the ROC chart, the price fell lower.

But the indices hit the hardest over the past three months were the tech-heavy NASDAQ 100 , down 9.1%, and the small cap Russell 2000 , which dropped about 10%. During the pandemic, the NASDAQ was the outperformer, while the Russell was the laggard.

After the first wave of the pandemic subsided the two indices took turns leading and lagging. Once inflation became the primary focus, they've been moving in tandem. When investors became fearful of rising costs, tech shares were sold off for their lofty valuations and small company stocks were dumped for the disadvantages they faced because they lacked the resources to navigate a rising inflation and higher interest rate environment, unlike the bigger players who can more easily weather the changes. 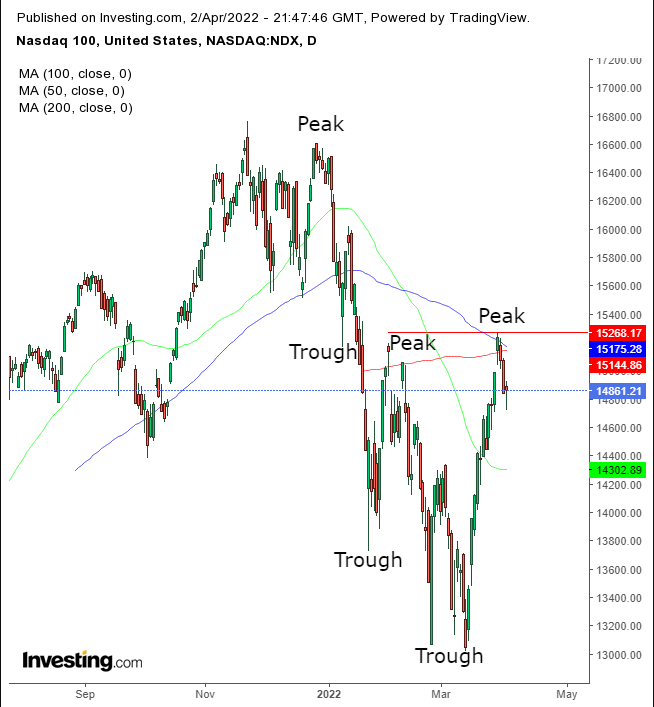 Like the SPX, the NDX is trendless after the index's March peak surpassed February's. However, similar to the Dow, the price was back below the 200 DMA. Remember too that the NASDAQ 100 remains in a bear market, having fallen over 20% since its previous peak, which also happened to be its record high. 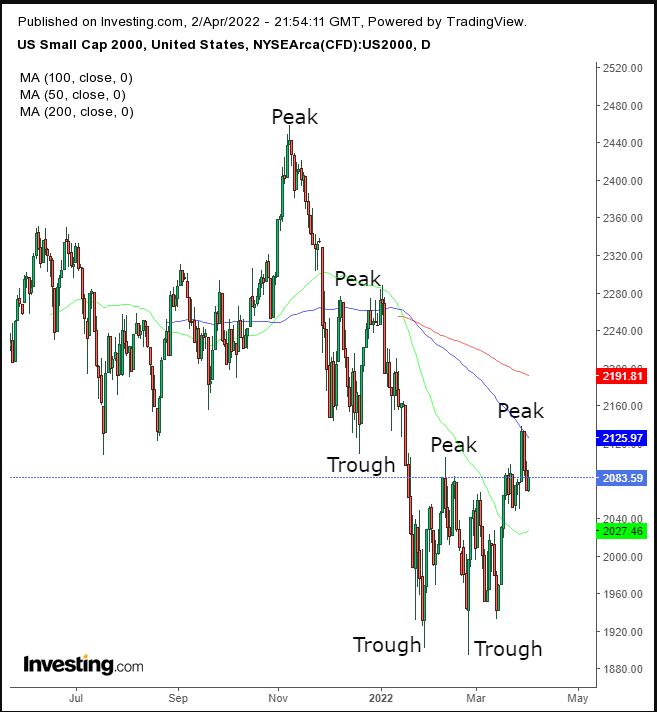 The same sideways move is visible in the Russell 2000. While its Feb. 24 low extended the index's falling troughs, its Mar. 29 peak surpassed that of Feb. 10. However, its MA formation remains bearish, with the price never even attempting to make it over the 200 DMA, even finding resistance by the 100 DMA. Like the NASDAQ 100, the Russell 2000 remains in a bear market.

Treasuries are signaling the outlook for inflation and the Fed's path to higher interest rates. The 10-year yield touched 2.55% in the past week, an incredible rise when one considers the benchmark note began the quarter at just a 1.51% yield. 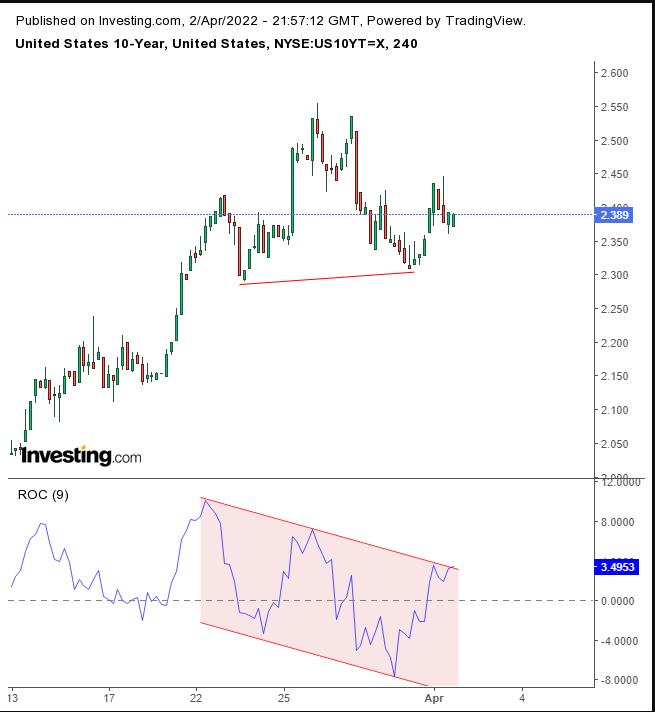 The 10-year yield has been trading according to an H&S top when viewed via the 4-hour chart. The ROC reached the top of a falling channel. If the indicator returns to the channel's bottom, it will signal a price follow-through in completing the reversal pattern.

The dollar was up for the final two days of the past trading week, but down overall for the week. 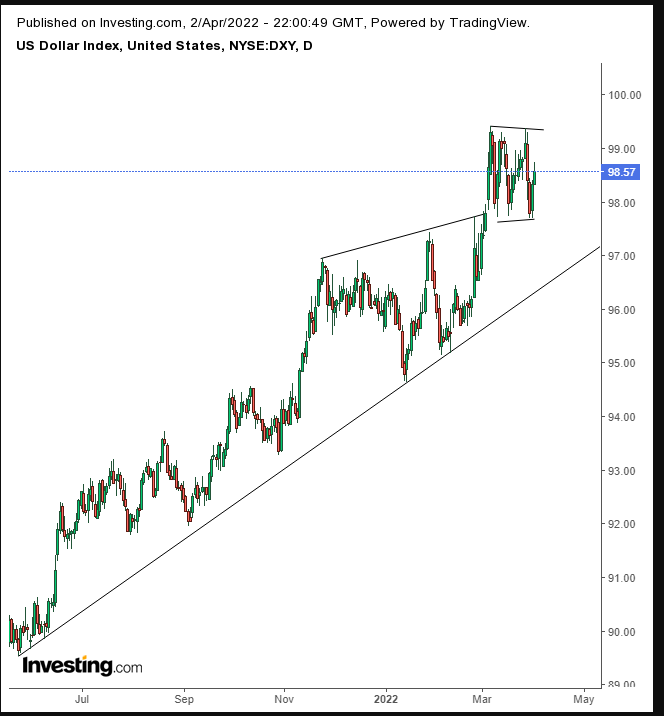 The greenback has been alternating higher and lower from week to week since it entered a range at the beginning of March, after completing an H&S continuation pattern. Currently, we still consider the range a flag.

Either way however, the next breakout direction will determine the USD's upcoming trade trajectory. Given the previous H&S and the rising trend line, we're betting the breakout will be higher.

Gold slumped on Friday as the dollar strengthened. However, the precious metal fell on a weekly basis as well, even though the dollar softened during that same period. In addition, the S&P 500 was flat at the same time, so, it doesn't seem that gold suffered because of robust risk appetite. Perhaps there's a technical explanation. 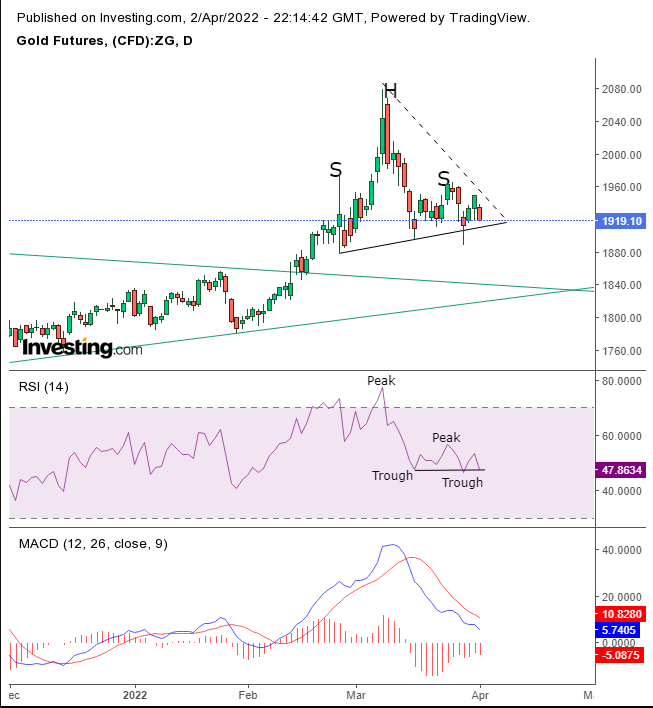 The yellow metal has been trading in a range as it broke the topside of a year-and-a-half-long Symmetrical Triangle, reaching its implied target to boot. Trading has developed a flag since the breakout, which we posited could be an H&S top.

Still, the indicators suggest the pattern is a Symmetrical Triangle, raising the odds for an upward breakout. Both the momentum-based RSI and price-based MACD are bearish. In addition to a descending series of peaks and troughs, the RSI may be developing a continuation H&S.

Bitcoin closed higher for a third week—the first time this has occurred since February. 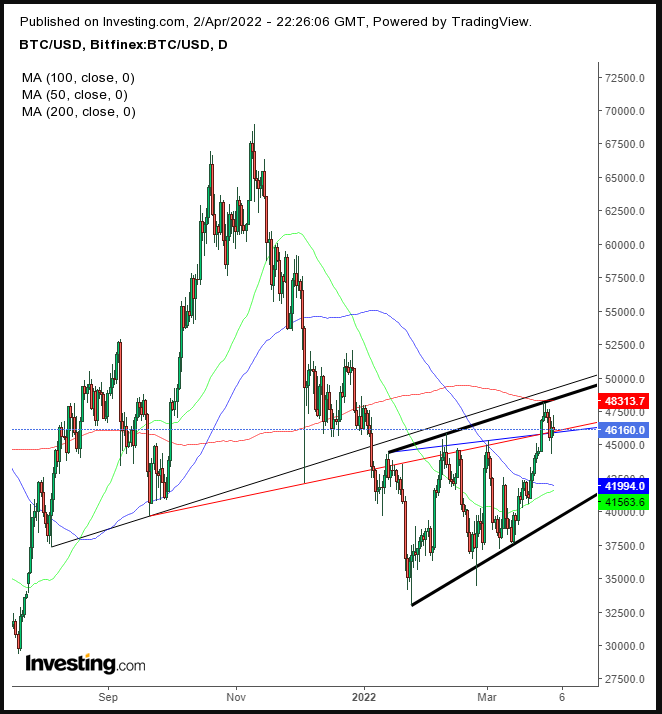 The digital token has been moving in a rising range since the Jan. 24 low, after completing an H&S top between August 2021 and January 2022.

Our interpretation of the pattern's neckline is the longest black line, in place since the August low, which includes the entire left shoulder. Some readers commented that the neckline should only include the right side of the right shoulder and the enter intraday price of the left shoulder, which we included as a red line. While that may be textbook theory, technical analysis is as much an art as it is a skill.

We drew our lines based on our subjective understanding based on personal experience. If the red line is the correct neckline, the H&S top is suspect. However, if our neckline better represents the supply and demand angle, the H&S top remains intact, as the price respected its resistance. Meanwhile, the range that initially appeared to us as an H&S (blue neckline) bottom seems now to be more of a potential rising wedge (thick black lines), which is bearish within the underlying downtrend, complementing the H&S top.

Oil dropped on Friday, for a second day as well as for the week. However, the energy commodity has been trading in a range since surging at the beginning of March. 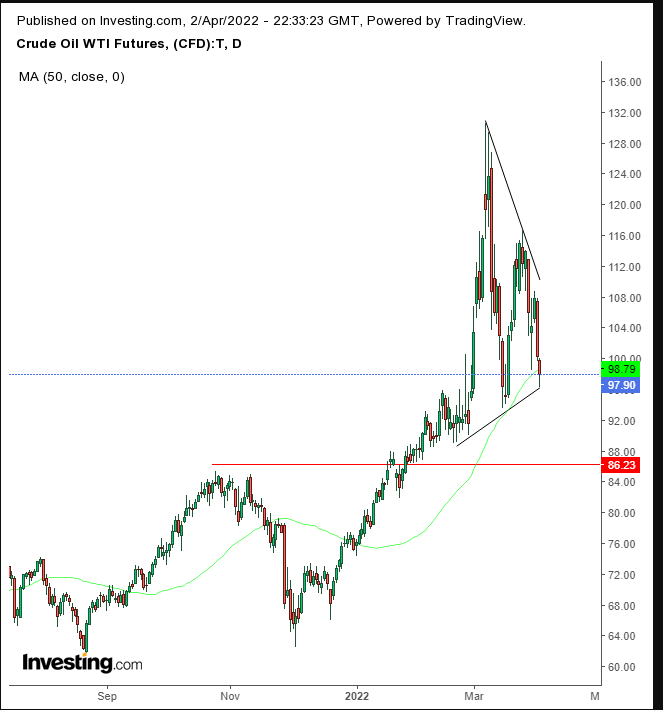 WTI has been trading within a symmetrical triangle. By definition, that means both buyers and sellers are eager. Hence, a breakout, when it comes, could occur in either direction. However, there is an expectation that the price would resume its underlying trend, in this case, higher.

Finally, the pattern developed after breaking the resistance of the October high, where oil has been finding support ever since—adding to the outlook for an upside breakout.