Trading last week began with fears that inflation and the still spreading pandemic would deflate the much-anticipated US recovery. Five days later, however, equity markets finished the week with an array of new record highs on Friday, as well as the Dow Jones closing above 35000 for the first time, as investors focused on stellar corporate results as earnings season ramped up.

However, with another FOMC press conference on tap Wednesday after the Fed's monthly meeting, markets will be carefully paying attention to any nuanced changes or differences in upcoming Fedspeak.

All four major US indices—the S&P 500 , NASDAQ , Russell 2000 and of course the Dow—finished the week on high notes, with all indices but the Russell seeing a boost of +1% on the week. The Russell 2000 underperformed its peers. The small cap index, whose listed domestic firms are the most representative of value stocks expected to provide the best returns on a restarting economy, finished 6.8% below its Mar. 15 record.

During the course of last week, investor interest flipped from value to growth stocks, though, on Friday, defensive sectors such as Utilities and Healthcare outperformed. Still, tech sector stalwart Communications Services also had a solid finish. 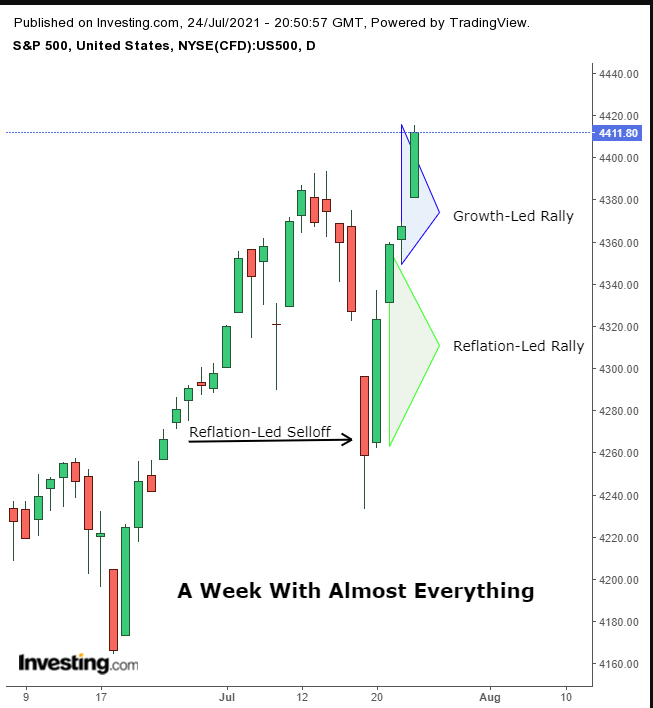 Does this all mean the market accepted on faith Fed Chair Jerome Powell's recent, repeated assurances that the current rate of inflation is just transient and therefore doesn't warrant the removal of accommodation? There's no simple answer to that question.

It appears that retail traders are back in force. According to Vanda Research, via Bloomberg, last Monday alone, when stocks were plummeting, retail traders bought a record $2.2 billion worth of equities. That’s the result of fiscal policy that just gives away free money, coupled with monetary policy that disincentives saving because of nonexistent yield.

Could that mean that this kind of dip-buying by retail traders indicates faith in US economic growth? Two components of this market activity make that argument less than convincing. First, dip buying by day-traders reflects nothing about the future since there's no clear indication anything will be held for either the short or long term.

Second, retail traders don’t necessarily pay as much attention to Fedspeak, as do institutional traders. Therefore, the current record rally does not necessarily prove that those retail investors bought equities because they believed the Fed's take that inflation is temporary. Indeed, it's unclear what they believe, if anything.

This dichotomy—of growth sectors boosting markets during economic stagnation (especially when these rallies include defensive stocks) and slumping markets when the narrative continues to chat up a strong recovery—is perhaps best illustrated in the following U.S 10-year Treasury chart. 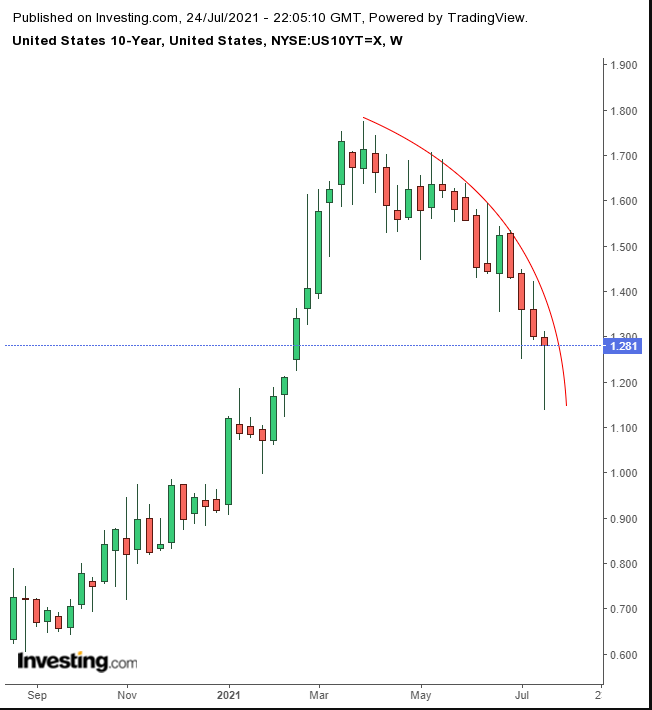 While stocks have been skyrocketing, Treasury yields are down 26% since mid-March. That means that even as investors are buying the dips, they're hording safe haven Treasuries.

That's not exactly a gesture of faith in the economy. Still, last week’s powerful hammer, with its extremely long, lower shadow, demonstrates that Treasury bears pushed back, which may be a sign the Treasury rally which caused yields to slump is coming to an end. If yields shoot up from here, that will support equities.

We could see the same lack of risk concerns via gold trading. 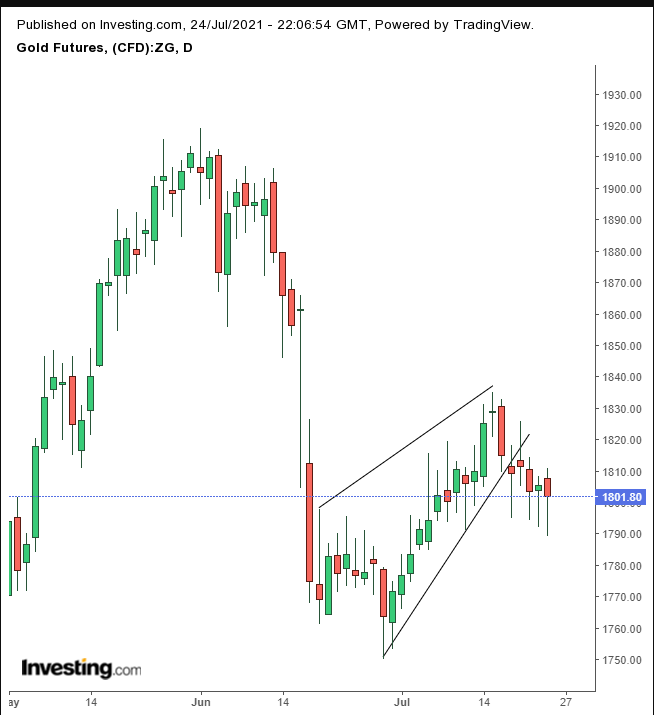 The yellow metal completed a rising flag, which could signal another leg down.