Expect markets to remain at last week's levels of raised volatility through at least the Sept. 30 government funding deadline if the US Senate vote on Monday doesn't enable the suspension of the debt ceiling. Should the motion not pass, it could force a government shutdown at the end of the month, weighing on stocks.

Still, even if US lawmakers are able to avert a shutdown, additional global equity market risk remains in play, fueled by China's heavily indebted real estate developer Evergrande (HK: 3333 ) (OTC: EGRNY ). The company missed a key, dollar-denominated, bond coupon payment on Thursday, leaving global investors even more jittery about the chances of a collapse of the Shenzhen-based property company—which many believe could start a cascading stock market tsunami.

A third potential market-mover could be Fedspeak, as Chairman Jerome Powell will testify before Congress on Tuesday, even as other policymakers are slated to speak at events throughout the week.

October Effect About To Play Out?

The month of October is considered to be a time when stocks historically decline, giving rise to the term the 'October Effect.' As a rule, equities have been 36% more volatile than average in October, according to Sam Stovall, Chief Investment Strategist at CFRA. Stovall characterizes October as a “seismic month,” during which “volatility is higher...you have a greater number of pullbacks, corrections and bear markets that either start or end in the month.”

Stovall also points out that technical indicators are signaling distribution—a term referring to selling by the 'smart money' to what's often referred to as 'dumb money,' creating a top—signaled as well by the fact that “many stocks are trading below their 200-day moving average.”

Only 59% of stocks on the New York Stock Exchange remain above their 200-DMA, or in an uptrend, according to wealth management company Wellington Shields. That's a bearish indicator, as breadth weakens.

In other words, major indices such as the S&P 500 , Dow Jones and NASDAQ , are all up based primarily on gains by bigger, mega-cap companies, as participation slips, diminishing support. Wellington analysts noted:

Case in point: the S&P 500. The broad benchmark is showing cracks from a variety of angles. Remember, these analysts have been referring to individual stocks that are not keeping up with the overall index. Is this breakdown visible via the index itself, the face of the US stock market? 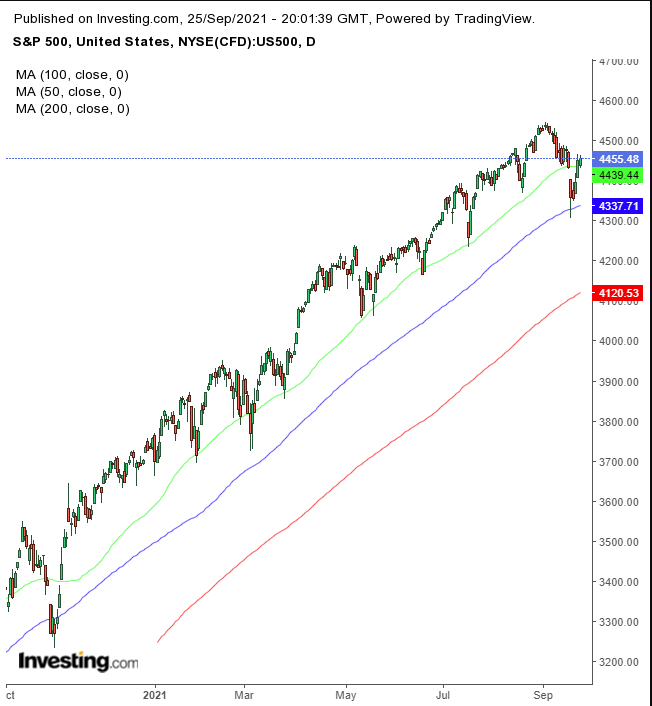 In other words, the index hasn’t maintained its rate of ascent since early November, and its next line of support may become the 100-DMA. That's a step down within the uptrend.

Should that fail, we’ll look for the 200-DMA—currently at 4,120—to be the next, and perhaps final, support line. Here's what the longer view is telling us: 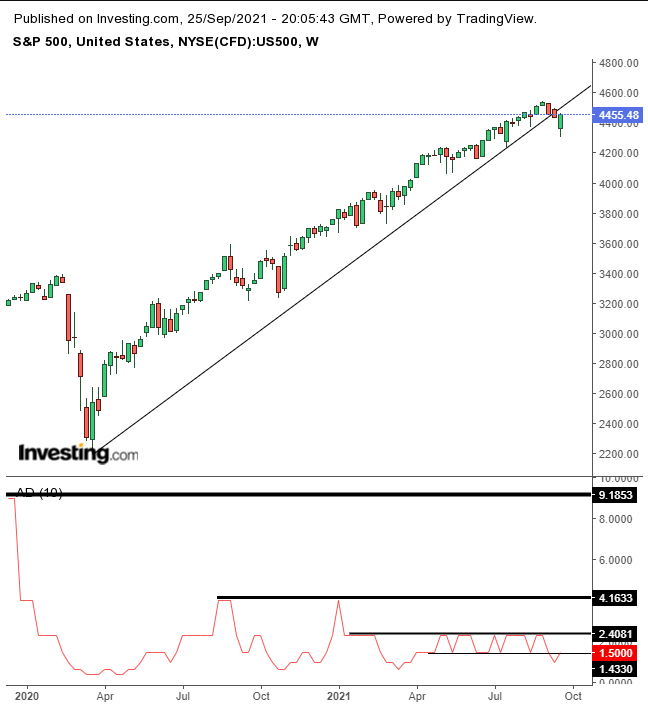 Notice the breakdown in the Advance/Decline Line. It measures the breadth of the market meaning how many stocks rose, and how many fell.

The greater the number of companies participating in a rally, the more reliable it is. The fewer that take part...well, you get the picture.

What's patently clear is the negative divergence between market breadth, as measured by the indicator, and the price. The more the benchmark accelerated, the less successfully the indicator was able to keep pace, going back all the way to December.

As well, the A/D has found resistance by its previous support, suggesting it may yet drop further.