After marching forward for two days, the benchmark equity indices lost the shin. The BSE Sensex declined 0.34% on October 27 and ended at 61,143.33. NSE Nifty 50 declined 0.31% and settled at 18,210.92. Weak global cues drove the indices downward. Buying in sectors like FMCG, pharma, IT failed to hold selling in sectors such as financials, media, metal, and auto. Out of the 50 Nifty stocks, 23 stocks went uphill while the remaining 27 went downhill. Although markets appear overvalued, there are some stocks that offer a good bet in the short to medium term. We have picked up two such stocks that have a solid potential to grow in the medium term.

KEC International Ltd is a flagship company of the $4.5 billion RPG group. KEC has executed/ongoing projects in over 33 countries. It operates under six segments namely T&D, railways, civil, infrastructure, solar, and smart infrastructure. The company is one of the biggest T&D players globally with a total tower manufacturing capacity of 3,62,200 MTPA. Its international T&D order book grew almost four times in FY2021 to Rs 3,700 crore year-on-year with multiple large-sized orders in Oman and Mozambique. KEC is the largest T&D player in South Asia with a ~15% market share in India and ~20% market share in SAARC countries. A robust total order book of ~Rs 19,109 crore at the FY2021 end provides clear revenue visibility. Increasing crude prices led to higher tendering activity in the MENA region. It has, in turn, resulted in a plethora of opportunities for KEC’s international T&D business. Orders in KEC’s new verticals such as Flue Gas Desulfurization, chemicals, hydrocarbon, water pipeline, and warehouse augurs well for smart infrastructure division. The company is executing five metro-rail projects on the back of higher margins than foreseen tender margin. Notably, the contribution of non-T&D segments steadily grew from 13% in FY2016 to 42% in FY2021.

For FY2022, KEC International has guided for more than 10% revenue growth. The company expects its civil and railways segment to grow at 100% and 30% year-on-year. It anticipates order inflows of Rs 8,000 – Rs 9,000 crore in T&D and the same levels in non-T&D verticals. This implies almost 1.8 times over FY2021 orders of Rs 11,900 crore. The company expects to attain 20%-25% revenue CAGR in this segment in the next two years which should translate the operating margins into double-digits. Long-term demand prospects for power T&D infrastructure, well-diversified business portfolio, strong order book coupled with a systematic reduction in debt augurs well for KEC’s top line and bottom line in subsequent quarters.

On the business front, headwinds remain in the form of contraction in operating margins. Higher steel prices and losses in Brazil’s older EPC contracts pushed margins downward. However, these are expected to recover in the second half of FY2022 on account of the higher contribution of new orders in execution. KEC International appears reasonably valued in the peer group based on PE multiple. 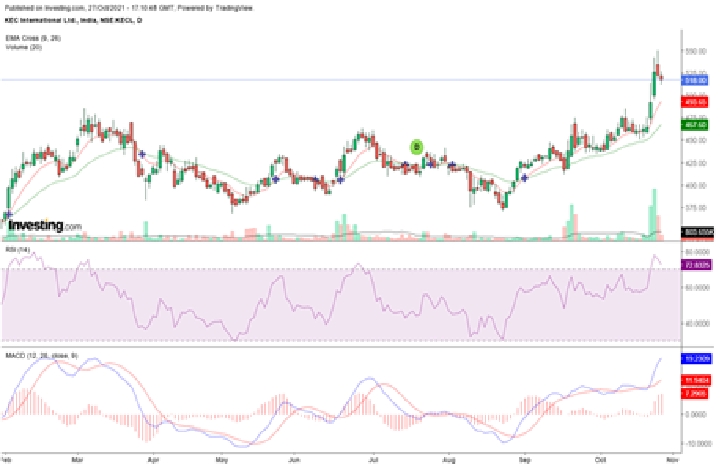 Note that FIIs/FPIs, mutual funds, and DIIs have marginally increased their stake in the company in September 2021 quarter. The stock has mixed indications based on key technical indicators. While RSI appears unfavorable for the scrip, it looks good based on MACD and 20-day/30-day/50-day/100-day/200-day EMA.

JK Tyre & Industries operates in three segments namely truck & bus, passenger vehicles, and truck radial. Truck & bus accounted for 56% of revenue followed by passenger vehicles at 23% in FY2021. Aftermarket, OEM, and exports contributed 64%, 18%, and 18% respectively to fiscal 2021 revenue. With market leadership in the TBR vertical, JK Tyre should benefit from the economy unlocking, restrictions lifting and revival in the domestic commercial vehicle market. The company will likely leverage from Government’s infrastructure investments and an uptick in road construction and mining. The demand situation will be much normal beginning the third quarter of FY2022 pushing JKT’s top-line growth. On the operating profit and margins front, the headwinds in the form of increased commodity costs are likely to continue in the near future. However, focused and systematic debt reduction, capacity debottlenecking, increased volumes leading to double-digit revenue growth should drive its profitability higher in subsequent quarters.

Due to the lower base year-on-year, we looked at the CAGR for key metrics. While revenue CAGR remained in negative low single-digit territory, its net profit CAGR was a healthy 72% on a 3-year and 13% on a 10-year period. In September 2021 quarter, FIIs and DIIs marginally increased their stake. Based on the peer group's PE multiple, the stock appears undervalued. 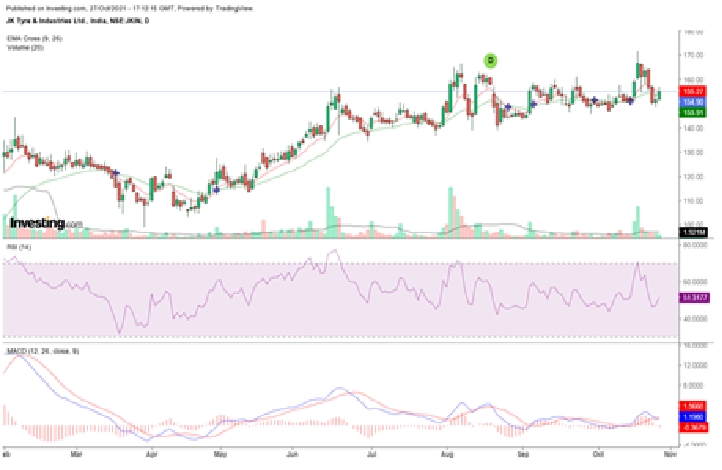 The scrip has a mixed indication based on major technical parameters. While the stock appears positive based on RSI and 20-day/30-day/50-day/100-day/200-day EMA, it doesn’t look good from the MACD angle.