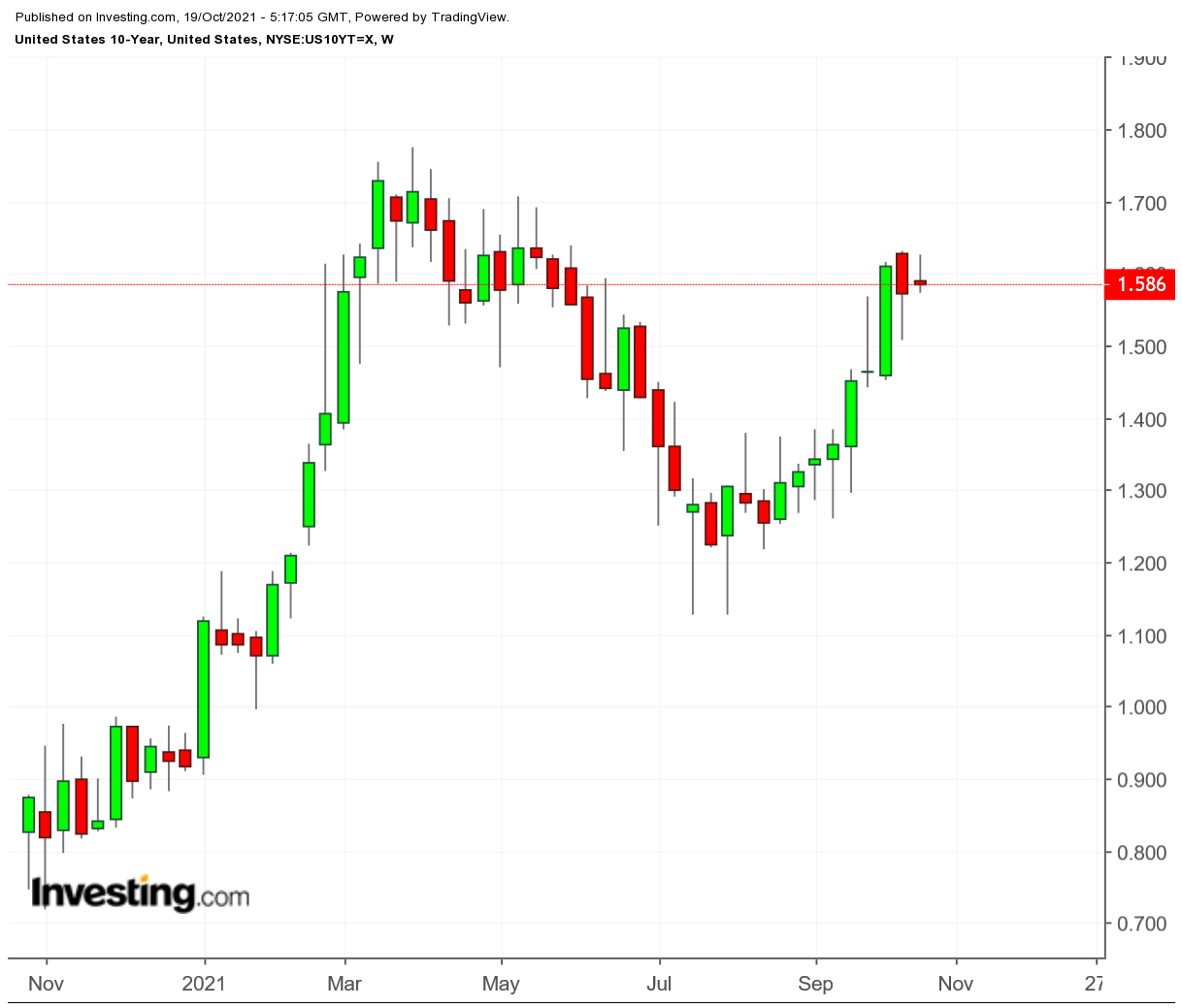 The yield spiked briefly above 1.60% again on Monday as worries about rising oil prices fueled inflation fears, but quickly settled down to below 1.58%.

Last week, the yield plunged more than 3 basis points to below 1.52% on Thursday when the producer price index reading came in lower than forecast, but started rising again on Friday with the surprise increase in retail sales , which rose 0.7% in September. Economists are clearly having trouble getting a grip on what to expect. The consensus forecast on September retail sales was for a decline of 0.2%—pretty far off the mark.

Brent crude oil futures pushed above $85 a barrel on Monday as fossil fuels are making a huge comeback—just in time for the Glasgow climate change conference at the end of the month.

In the US, West Virginia Senator Joe Manchin looks set to torpedo Democrats’ green energy plans as he defends his state’s coal interests.

Energy cutbacks are also denting China’s growth , with a knock-on effect for the rest of the global economy. Analysts calculate that power shortages will force Beijing to temporarily abandon its emission goals and increase coal consumption.

Back in the US, missed forecasts continue to plague economic data. On Monday, the Federal Reserve reported industrial production in September was down 1.3%, while economists were forecasting a gain of 0.2%. The Fed also revised August data to show a decline of 0.1% after initially reporting a gain of 0.4%.

Hurricane Ida was blamed for some of the September decline and a drop in production of motor vehicles and parts accounted for some more—but these are the kinds of things we expect economists to take into account.

No wonder investors are edgy.

The uncertainty is pushing up shorter term Treasury yields and flattening the yield curve as investors apparently have not yet lost confidence the Fed will be able to control inflation over the longer-term.

Yield on the five-year Treasury note hit above 1.19% on Monday, narrowing the gap to the steady 30-year bond yield to levels not seen since early last year.

In Europe, hawkish comments about rate hikes from Bank of England Governor Andrew Bailey over the weekend pushed up yields on UK government bonds, with the benchmark 10-year yield rising more than 3 basis points to 1.139%. 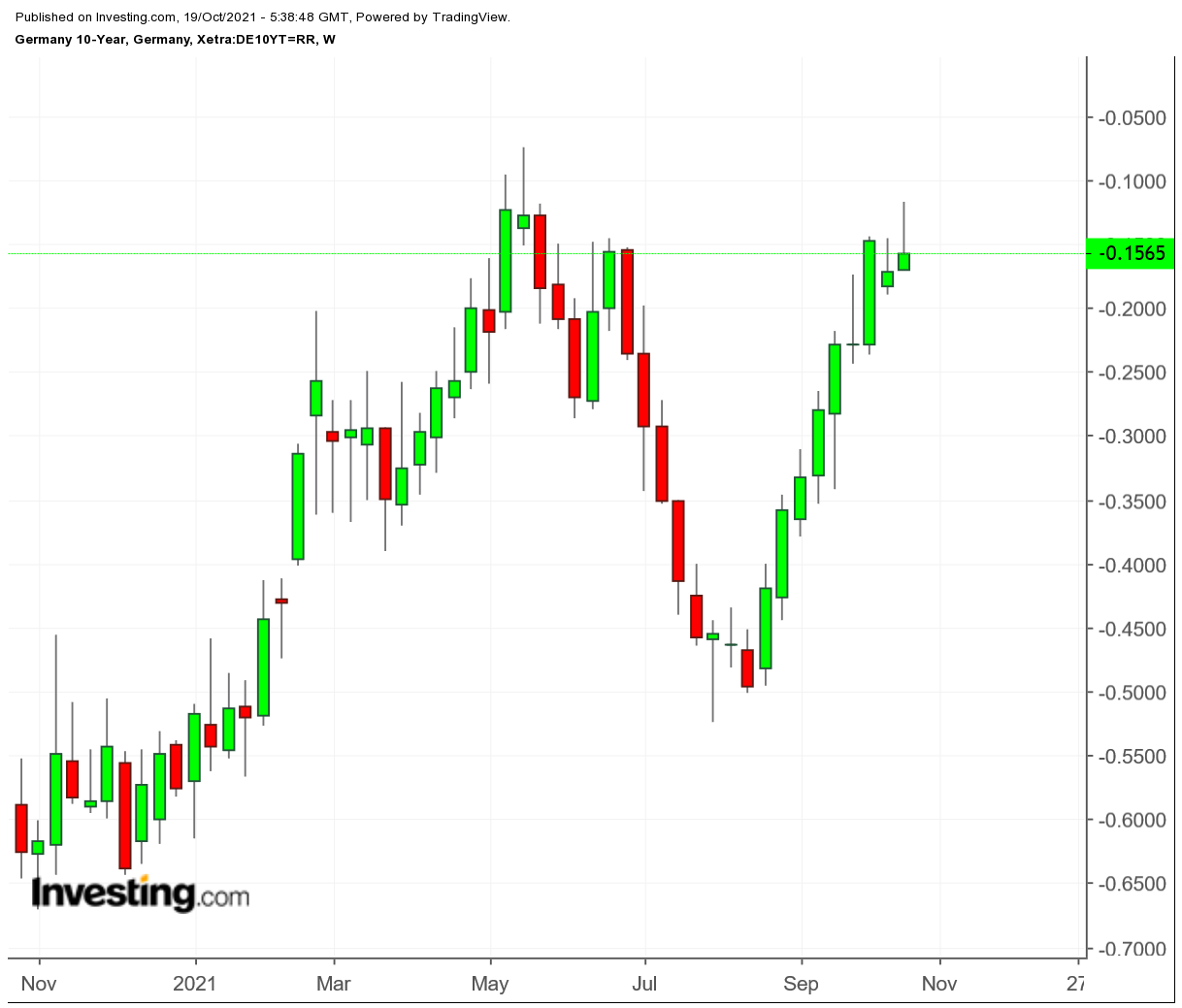 While European Central Bank President Christine Lagarde is maintaining her resistance to rate hikes, yield on Germany’s 10-year bond—which serves as a benchmark for the eurozone—followed gilt yields upwards before settling at about minus 0.151%.

Leaders of Germany’s Free Democratic Party joined the Social Democrats and Greens in approving the principles for a three-party coalition government, virtually ensuring Finance Minister Olaf Scholz will become chancellor once the details are negotiated. It will be a significant change for the country after 16 years under Christian Democrat Angela Merkel.

Roberto Gualtieri, a former finance minister and cofounder of the Democratic Party, is in line to become mayor of Rome, which has been hurting under Five Star rule.