Bond investors have been fixated on the amount of the Federal Reserve’s asset purchases and the possible impact of the Fed reducing those purchases, removing a price support and perhaps causing Treasury yields to rise.

The minutes of the late-April meeting of the policymaking Federal Open Market Committee, however, opened another possible change in the market for Treasuries—the permanent extension of the Foreign and International Monetary Authorities (FIMA) Repo Facility, which is currently set to expire in September.

The facility was set up at the end of March 2020 to relieve selling pressure from foreign central banks and other monetary authorities by accepting Treasury securities for repurchase agreements, giving them access to cash without having to sell.

According to the FOMC minutes:

“A few participants noted that, had a FIMA repo facility been in place in March 2020, it likely would have significantly damped pressures in these markets caused by the abrupt need for dollar funding abroad.”

Making the facility permanent might be a good idea, the policymakers concluded.

“In their discussion of considerations related to the establishment of a permanent FIMA repo facility, a vast majority of participants saw the potential benefits as outweighing the costs.”

The Treasury Borrowing Advisory Committee went a step further in a presentation last month and suggested a permanent facility for a wide range of U.S. investors to enter repo agreements with the Fed. This type of facility would enable dealers to meet demand for liquidity in times of stress while relieving pressure on Treasuries.

Another idea floating around is to mandate a central clearing facility for Treasuries. This idea, championed by Stanford economist Darrell Duffie, would ease the capital restraints on bank-affiliated dealers, enabling them to increase the supply of liquidity, or eventually cut down on dealer intermediation.

Both ideas were among those proposed in a December Brookings Institution paper co-authored by Nellie Liang, a longtime Fed policymaker who has a brief stint at Brookings while awaiting confirmation as under secretary of Treasury for domestic finance—which would put her in charge of Treasury securities.

These are potential solutions to keeping the Treasury market functioning well, not only in times of stress like the onset of the COVID-19 pandemic, but in a world where the U.S. is envisaging trillion-dollar deficits for a decade. This could become even more relevant when the Fed is no longer propping up prices with its asset purchases.

Yield on the benchmark 10-year Treasury note fell after Friday’s release of the personal consumption expenditure index , despite its showing inflation slightly higher than forecast. 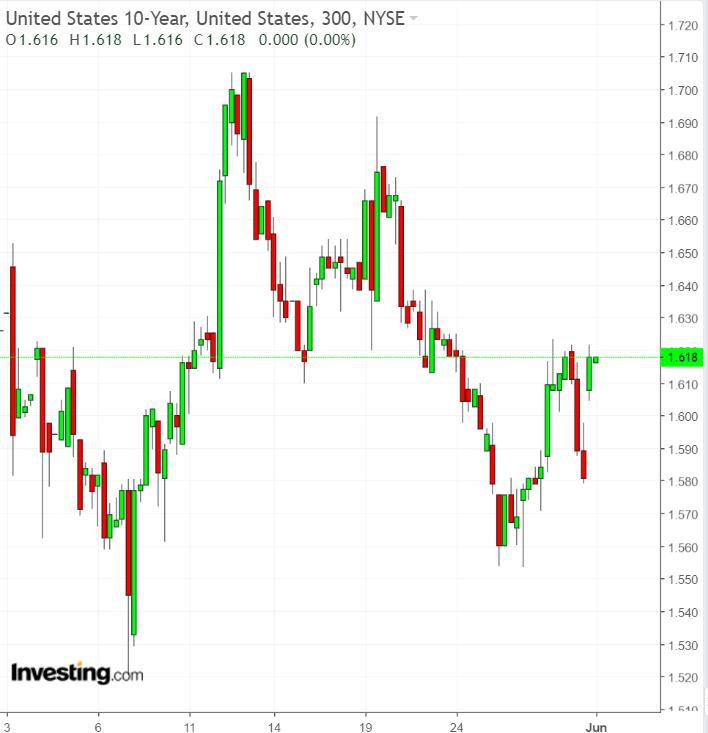 The yield went down to about 1.58% (U.S. markets were closed Monday for the Memorial Day holiday).

Some analysts are speculating that the anticipated taper tantrum has already happened with the spike in the 10-year yield to about 1.75% in March. Others are less optimistic about Treasuries, noting that bank demand may lessen as a reopening economy offers more opportunities for lending.

Fed officials are starting to hint at tapering asset purchases, part of their communication strategy to prepare investors for the long glide path to reducing the pace of buying. They also seem to have convinced investors not to worry about inflation , though there is some nervousness and warnings from prominent dissenters.

A recent warning comes from Thomas Jordan, head of the Swiss central bank, who cautions that history shows once inflation is out of control, it often entails a recession to rein it in. He told Neue Zürcher Zeitung that he was referring to the situation in Switzerland, though his caution came in response to a question about the Fed tolerating inflation above a 2% target.

For Jordan, however, and Switzerland, 2% remains a ceiling. “We define price stability as a positive increase in consumer prices of below 2%,” he said. “This definition has stood the test of time.”