NIFTY opened higher and settled higher after trading volatile throughout the day. NIFTY formed DOJI on daily charts indicating indecisiveness to move either side. NIFTY didn't breach it's previous day's low indication support at lower levels. Closing above 11450 is a good sign of bullish continuation after major correction in the index led by negative news flows. NIFTY Index bullish trend seems to be completely intact as we may see in the chart below. NIFTY has taken support at the trend line on Monday as well as Tuesday trade. However, further, we may see moves in the index based on more news flow rather than data flow. 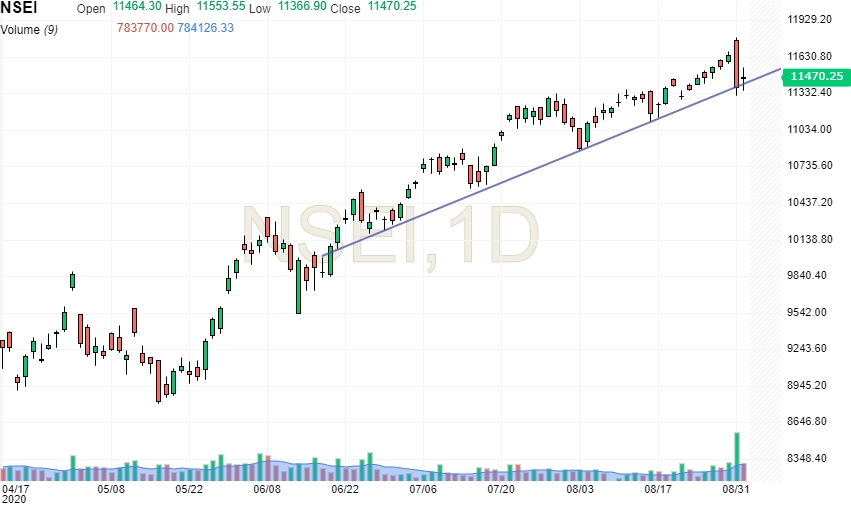 Nifty option chain analysis shows strength & support at 11400 with Max. PUT OI of 29,735 Contracts, and new writing of 6,281 contracts. We have also seen new put writing at 11500, giving more signs of bullishness. While CALL OI shows resistance at 11500 with max. OI of 33,343 contracts and the new addition of 6,406 contracts but CALL unwinding at 11300 & 11400 shows signs of fear in bears of index moving higher. The overall buildup in new options data shows a sideways movement for the next trading session with a trading range between 11420-11550.

NIFTY overall sentiment has become cautious levels with an upside bias as most of the bad news has been discounted. NIFTY seems to be more reacting to developments in global markets, INDO-CHINA Issues, Vaccination news. We see NIFTY moving more in a range for some time until a decisive breakout move comes.