Another bullish leg in the digital currency market continued to push the novel assets higher over the past weeks. In 2017, Bitcoin rose to $20,000 per token after the CME rolled out futures contracts on the token. After falling to a low of $4,210 in March 2020, the cryptocurrency snapped back to the upside, reaching a new high in December. A new era for Bitcoin has been ushered in so far in 2021 as the price moved over ten times higher when it peaked at $57,790 in February.

Bitcoin may be the leader of the crypto pack, but there are nearly 8,600 other digital currencies in the asset class. Stellar and Bitcoin Cash are two of the top eleven cryptos with market caps over the $8.8 billion level as of Feb. 25.

Wild and parabolic price action continues; correction over the past days

Parabolic moves in any market tend to take prices far higher than fundamental or technical analysis believe possible. A recent example, outside the digital currency arena, came in GameStop (NYSE: GME ) shares. The stock that was trading below $10 per share in late September 2020 rose to an incredible high of $483 in late January 2021 as a massive short squeeze drove the stock to a parabolic high.

While gravity hit GME and drove the shares back below the $50 per share level as of Feb. 23 (though it's trading higher once again), the parabolic move in Bitcoin and many other digital currencies continued until Feb. 22 when selling created another top and upside target. 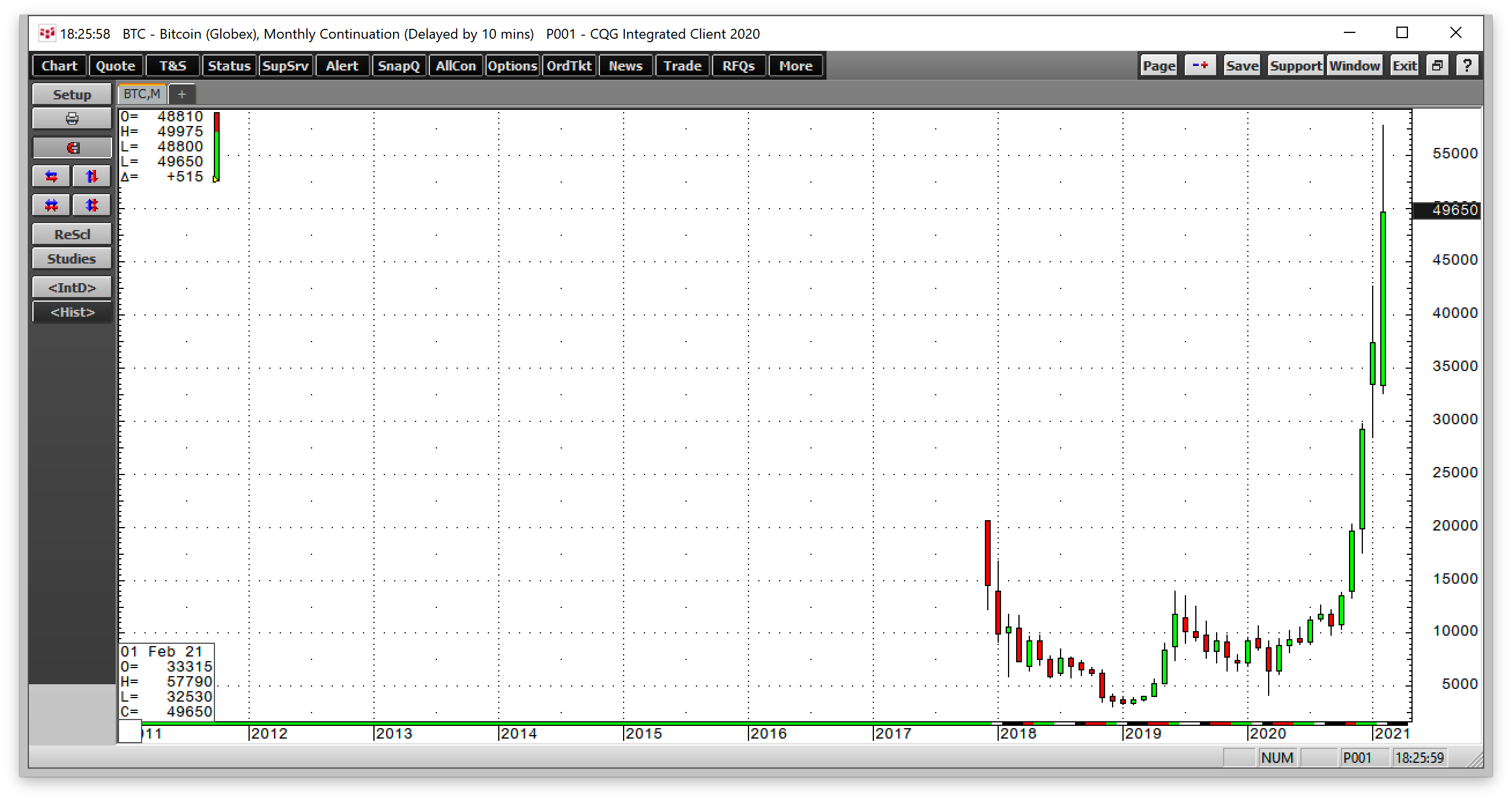 The monthly chart shows that Bitcoin futures reached a low of $4,210 per token in March 2020, when most asset prices fell during the beginning of the global pandemic. By the end of 2020, Bitcoin had rallied to just below the $30,000 level after a substantial rally from October through December.

When Bitcoin was below $40,000, Elon Musk’s Tesla (NASDAQ: TSLA ) announced it purchased $1.5 billion in Bitcoin and will accept the cryptocurrency for payment of its EVs. This week, SQ said it bought $170 million more Bitcoin.

Investments and acceptance of digital currencies have put bullish winds behind Bitcoin’s sails. While Bitcoin and Ethereum are the two leading cryptocurrencies, there are thousands more tokens in the asset class as of Feb. 24.

Stellar’s most recent snapshot, with the symbol XLM, shows an $9.23 billion market cap at just above 41 cents per token. Stellar, or Stellar Lumens, is an open-source, decentralized protocol for digital currency to fiat money transfers, allowing cross-border transactions between any pair of currencies. Stellar appeared on the digital currency scene in mid-2014.

Stellar’s website explains that the public is its owner. It relies on the blockchain to keep the network in sync. It claims that Stellar is:

“Much faster, cheaper, and more energy-efficient than typical blockchain-based systems.”

At just below the 42 cents per token level, Stellar is still below its all-time high from early 2018. 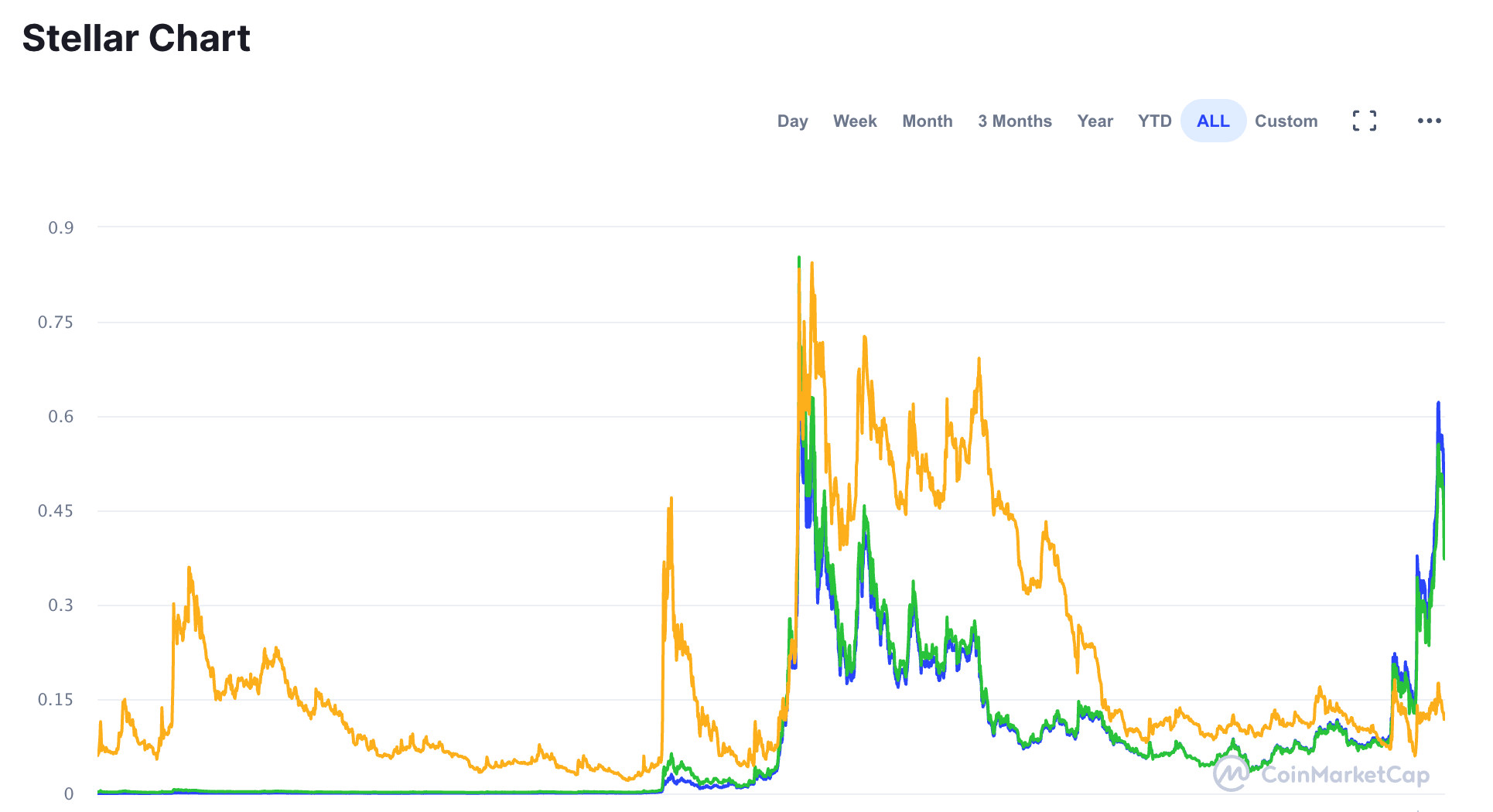 The chart above shows that while Bitcoin has moved over $30,000 per token above its late 2017 previous peak, Stellar remains below its January 2018 high of just over 75 cents.

With a market cap just over $9 billion, Stellar has approximately 0.60% of the digital currency market’s $1.486 trillion market cap.

Bitcoin Cash is just above in tenth position

Bitcoin Cash is a fork of Bitcoin. BCH is a spin-off or altcoin created in 2017. In November 2018, Bitcoin Cash split into two cryptocurrencies, Bitcoin Cash and Bitcoin SV. Bitcoin SV was the twenty-third leading digital currency on Feb. 24, with a $3.585 billion market cap. BCH sometimes goes by the name Bcash.

BCH’s website describes it as a 'facilitator' of how payments flow directly from payor to payee without the need of a bank or financial institution. 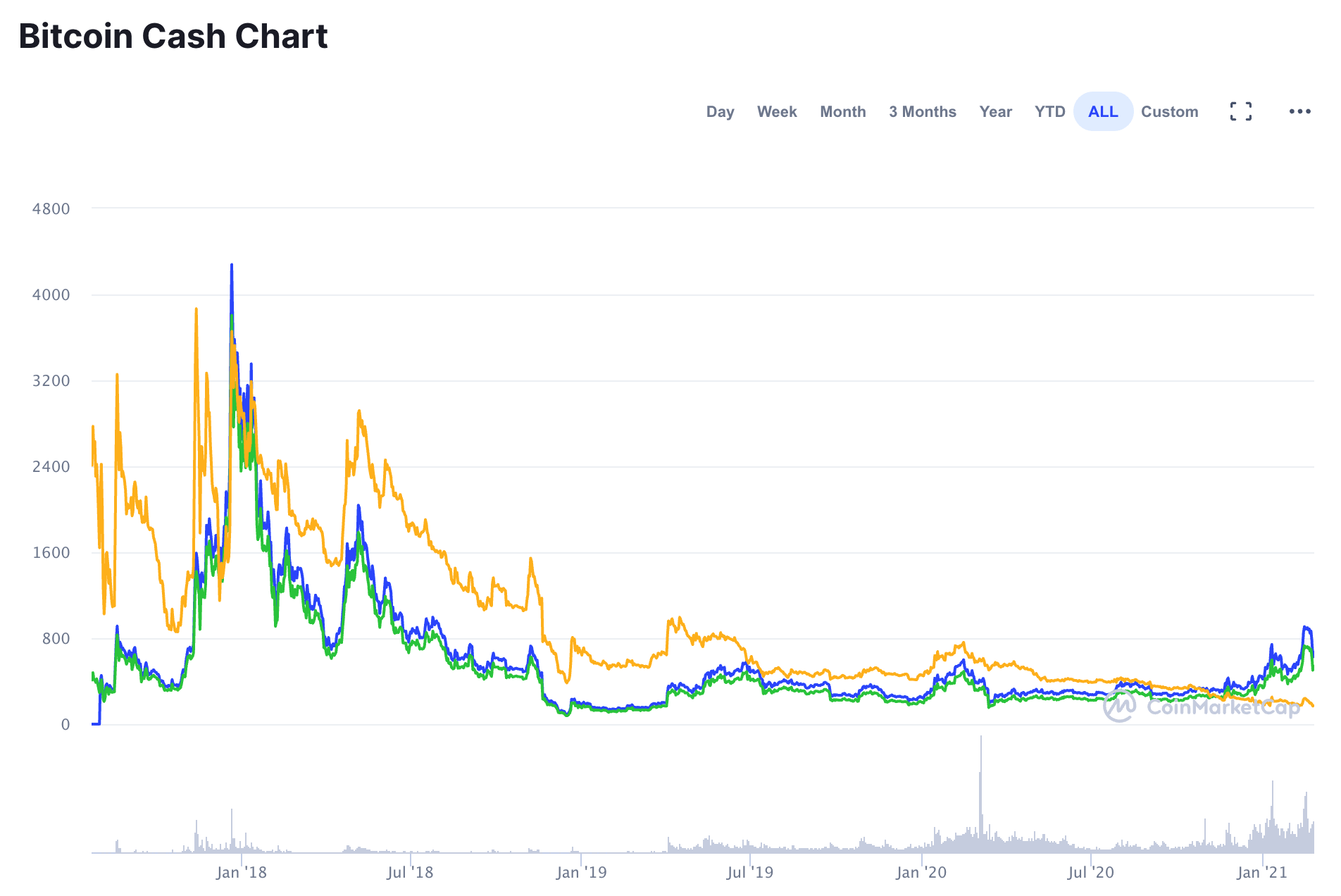 Not all tokens are trending with Bitcoin

All digital currency tokens are not equal. There are 8,587 tokens in the crypto world. Stellar and Bitcoin Cash have not kept pace with Bitcoin over the past months as both remain below their record highs from 2018 and late 2017. Meanwhile, they have been trending higher, just not to the same extent as the digital currency asset class leaders.

The bottom line for success in the asset class is a combination of utility, acceptance, and public relations. Bitcoin may own 61% of the market cap, but its PR is far higher. Square’s Jack Dorsey and Tesla’s Elon Musk turbocharged Bitcoin. The potential for lots of manipulation via PR in the sector is high, given the lack of regulations.

While Stellar and Bitcoin Cash do not get lots of promotion, they have one thing in common: critical mass.

Market cap is critical and 'Lotto tickets' rarely pay off

Bitcoin Cash and Stellar are two of the eleven cryptocurrencies with a market cap over the $8.5 billion level. They represent the cream-of-the-crop in the asset class, as only 0.13 tokens can claim membership in the over $10-billion club. Critical mass creates liquidity. Only 65 tokens have market caps of over $1 billion, representing 0.76% of the market.

Digital currencies are markets. All markets depend on volume and open interest that creates liquidity or the ability to execute buy and sell transactions with a narrow bid-offer spread.

Cryptocurrencies will remain a burgeoning asset class as the blockchain provides revolutionary technology for speed and efficiency. However, many of the tokens will fail because they lack the critical mass that leads to liquidity. While 65 cryptos have a market cap over $1 billion, fewer than 300 have a market cap over $100 million, and under 1,600 are worth more than $1 million. With almost 8,600 tokens circulating in the asset class, over 80% are nothing more than Lotto tickets.

Do your homework before investing in any of the smaller cryptos. While they could pay off big-time if they have the utility that receives acceptance and PR, most will go bust.

When trading, stick to the top digital currencies as they offer the best liquidity. Market cap is crucial, and remember, the trend is always your best friend in markets.

It is impossible to pick tops in Bitcoin, Ethereum, and some other tokens in the current parabolic environment. However, gravity is a powerful force that eventually causes substantial corrections after an explosive period.