Splunk (NASDAQ: SPLK ) sells data management and analytics tools and related services. The company was somewhat behind the industry trends in migrating to the cloud and in moving from traditional software licenses to software as a service (SaaS), but has been growing its cloud/SaaS revenue streams at a rapid rate.

The shares started a major decline in mid-November, following the announcement that president and CEO Doug Merritt was leaving the company. 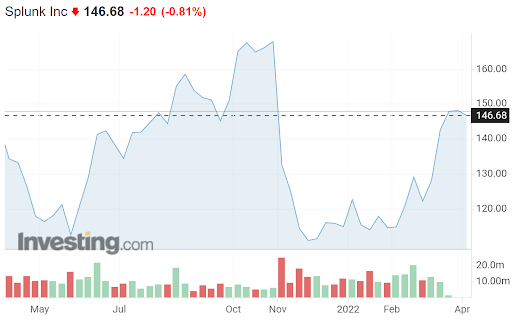 Shares in the San Francisco based software and cloud services provider have gained 6.9% over the past 12 months and the three-year annualized return is 5.3% per year. For context, SPLK’s industry group has returned 27.4% per year over the past three years. The poor stock price performance is due to sluggish growth. SPLK’s revenue growth rate has declined substantially over the past 10 years.

I last wrote about SPLK on Oct. 11, 2021, at which time the shares were trading at $150.90. I maintained a neutral rating. Since that date, SPLK has returned -3%, as compared with +5.3% for the S&P 500 (including dividends). For a growth stock like SPLK, the valuation is very sensitive to expected revenues and earnings.

In October, the Wall Street consensus rating for SPLK was bullish, with a consensus 12-month price target that was 19.5% above the share price at that time. In contrast to the analyst consensus, the options market was showing a bearish consensus on SPLK. Given the substantial disagreement between the options traders and the analysts, I compromised with a neutral rating. The disconnect between the analysts and traders was also apparent more than a year ago.

While the consensus outlook calculated from the views of individual Wall Street analysts is well known, the notion of estimating a consensus outlook in the options market is not as common. The price of an option on a stock reflects the market’s consensus estimate of the probability that the stock price will rise above (call option) or fall below (put option) a specific level (the option strike price) between now and when the option expires. By analyzing the prices of put and call options at a range of strike prices with the same expiration date, it is possible to calculate a probable price forecast that reconciles the option prices. This is called the market-implied outlook and represents the consensus view among buyers and sellers of options. For readers who want a more academic discussion, I recommend this free monograph from the CFA Institute.

I have updated the market-implied outlook for SPLK and compared it with the current Wall Street consensus outlook in updating my rating.

E-Trade calculates the Wall Street consensus outlook by combining the views of 21 ranked analysts who have published rating and price targets within the past 90 days. The consensus rating is bullish and the consensus 12-month price target is 7.2% above the current share price. The 12-month consensus price target has fallen by 13.3% since my analysis in October. There is a high level of dispersion among the individual analyst price targets, with the highest being 1.78 times the smallest. The larger spread among the analysts included in the consensus corresponds to a lower predictive value of the consensus. 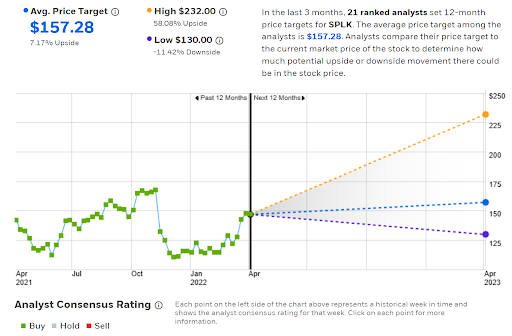 Investing.com calculates the Wall Street consensus using ratings and price targets from 39 analysts. The consensus rating is bullish and the consensus 12-month price target is 8.3% above the current share price. The spread in the individual analyst price targets, reflected in the difference between the highest and lowest values, is comparable to the E-Trade results. 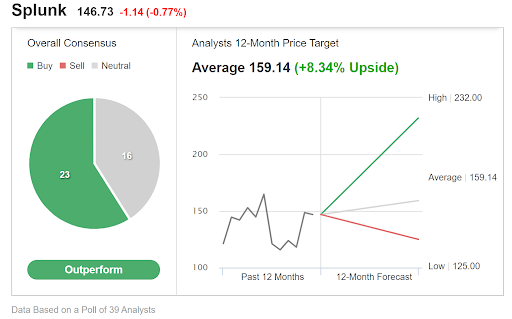 The bullish consensus rating and single-digit expected 12-month return suggest that the price surge over several weeks has largely diluted the potential upside.

I have calculated the market-implied outlook for SPLK for the 10.5-month period from now until Jan. 20, 2023, using the prices of options that expire on that date.

The standard presentation of the market-implied outlook is a probability distribution of price return, with probability on the vertical axis and return on the horizontal. 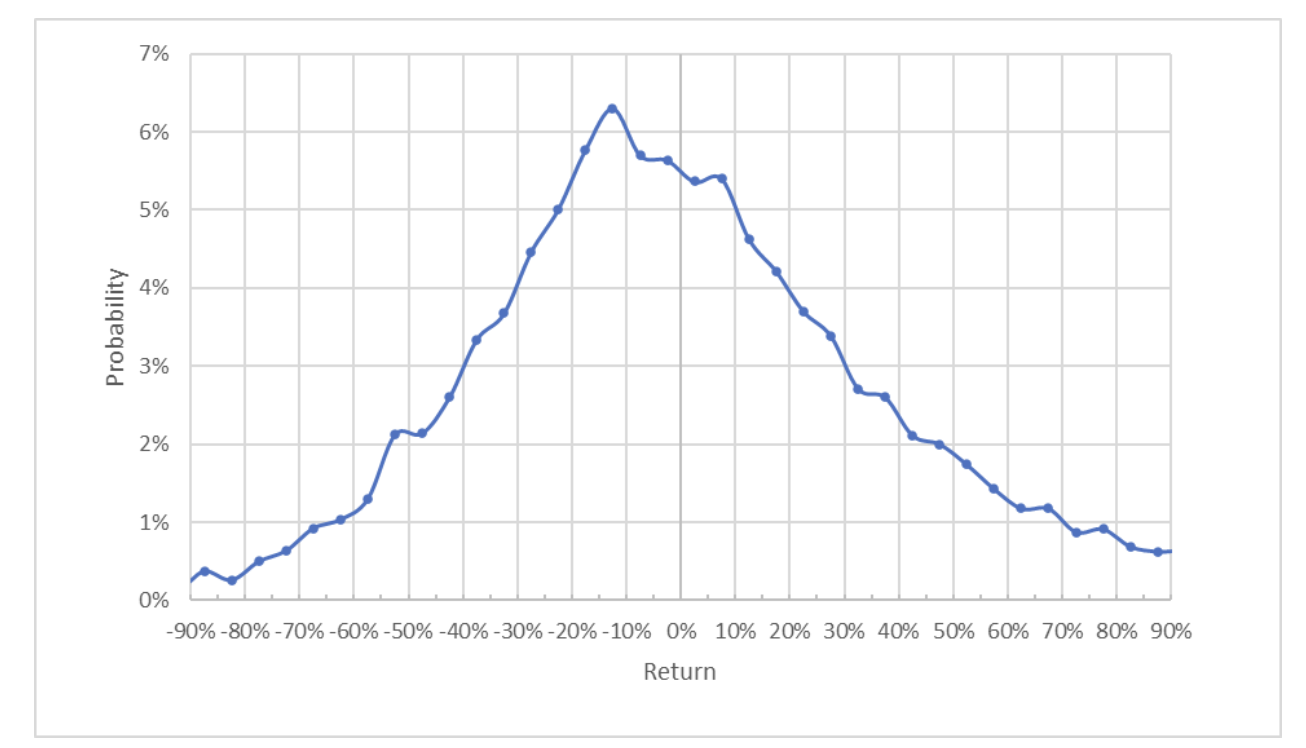 The peak in probability is clearly shifted to favor negative returns over the next 10.5 months, consistent with my results from October. The maximum probability outcome corresponds to a return of -12.5% over this period. The expected volatility calculated from this outlook is 44% (annualized).

To make it easier to directly compare the relative probabilities of positive and negative returns, I rotate the negative return side of the distribution about the vertical axis (see chart below). 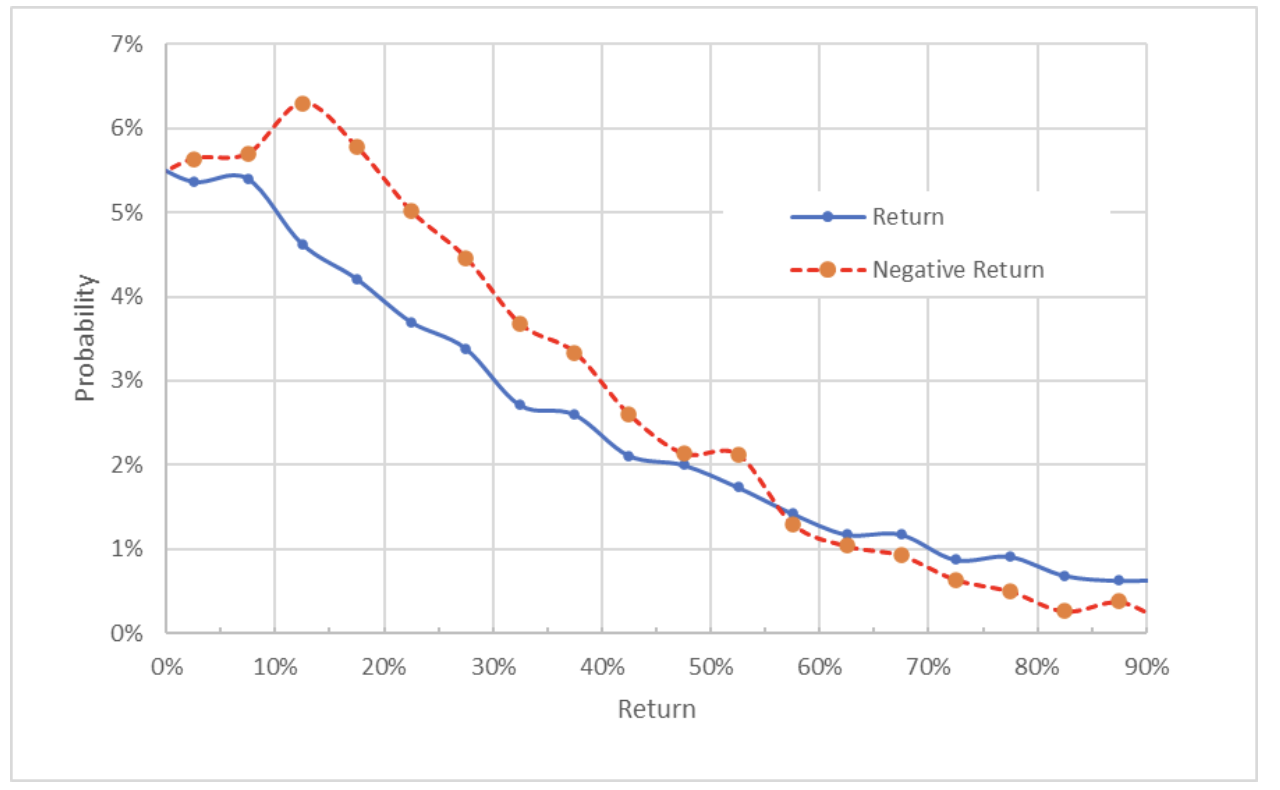 Theory suggests that the market-implied outlook is expected to have a negative bias because risk-averse investors tend to pay more than the fair value for downside protection (put options). There is no way to directly measure whether this bias exists, however. Even considering the potential for a negative bias, I still interpret this market-implied outlook as somewhat bearish.

SPLK has been underperforming for years as revenue growth has steadily slowed as the company is clearly in a period of transition. However, the adoption of Splunk's cloud-based SaaS model is encouraging.

Over the past several years, Wall Street analysts have been consistently bullish on SPLK, focusing on long-term potential, even as revenue growth has faltered. The current consensus rating is bullish, but the consistent 12-month price target has fallen and is now less than 8% above the current share price. For a stock with expected volatility of 44% (calculated from the market-implied outlook), this level of expected return is not attractive.

For a buy rating, as a rule of thumb, I want to see an expected 12-month return that is at least half the expected annualized volatility. SPLK is far below this threshold. The market-implied outlook to early 2023 is moderately bearish.

Considering the company's slow growth and recent executive turnover, the bullish Wall Street outlook and the somewhat bearish market-implied outlook, I am maintaining my neutral rating on SPLK.