The silver story is one of the most compelling in the investment world. It’s got all the potential that a monetary metal should have in an inflationary environment that wiser heads are comparing to the 1970s. In fact, if there was a better-performing investment than silver in the 1970s. I’d like to know what it was.

It does all the things that a monetary metal is supposed to do: physical silver in your possession is nobody else’s liability; it gets you out of the financial system; it acts as insurance; it hedges against the debasement of the currency. And so on. At the same time, it has all the potential of base metal – and base metals also tend to do well during inflation. Will this time be different?

On a historical basis, silver is probably cheaper than anything else. The ratio of gold-silver in the earth’s crust is 1:15 – there are 15 times as much silver. Therefore the ratio in price between the two should be 15. Indeed, somewhere between 15 and 20 is the historical average – at least, until the 20th century and fiat money came along. But today the average isn’t 15, it’s 77. If we were to go back to the historical average, and the gold price was to remain around $1,750 an ounce, silver would go above $115. And here we are today with silver at $22.

As I say, it has a lot of potential. Silver investors have found 2021 incredibly frustrating to date. Silver has been weak of late. The upside looks greater than the downside.

One day it will go above $50 and then who knows where it will go. I just wonder how long we have to wait. When it finally does go to $50 and above, it will move with the speed of a cryptocurrency you’ve never heard of – so much so, that it will be hard to get on board. – Moneyweek

The Edge over Gold

When discussing wealth preservation or any form of a conservative hedge, the word gold comes easily to the forefront. The shiny metal has a substantial history of having saved a civilization or two. The lesser obvious choice is silver, but this precious metal is in a unique situation right now that any speculator that seeks out a hedge against inflation should be aware of.

It isn’t just a good bet to hedge exuberant market risk right now. It is massively undervalued and, as such, a pristine play in itself.

A look at the monthly chart over the last forty years, back to 1980 when the US also was confronted with a crisis, silver prices skyrocketed. Overall, though, prices right now reflect averages like averages of that time.

In comparison to the monthly gold chart, we can see what’s out of whack. Gold since then from its averages at the time has appreciated nearly 300%. We see no fundamental reasons that substantiate such a divergence between the two. With silver being that grossly undervalued, it has tremendous additional potential once it is forced to catch up. This is partially reflected in the stretch between the spot price and the actual value of physical silver that can be acquired. A nearly 20% spread can be seen now for almost two years. It would come as no surprise that a supply shortage might bring fuel to an up move.

We find gold and Bitcoin very much suitable to protect your wealth. The steep percentage factor of inflation also warrants a more aggressive wealth preservation play. That is where silver comes in. Silver with the potential to see triple-digit prices in the near future allows for keeping inflation risk in check. – Korbinian Koller

After months in the dump, the fortunes of silver have turned, with the so-called “poor man’s gold” putting on its most sparkling show since May.

The question, of course, is whether it is a fad or will it continue into a blowout. Technicals suggest this rally has a few resistance points to clear before it fades.

Also, gold, silver’s more “illustrious cousin,” is displaying the signs of a possible breakout that have already brought it back to $1,800 an ounce, setting the stage next for north-$1,900 pricing last seen in June.

Silver may have solid industrial-based fundamentals, but it has been playing second fiddle to gold in recent years, meaning a solo rally without the yellow metal seldom survives.

More than 50% of silver’s demand originates from industrial use. As a malleable metal, it is just as good as gold for jewellery making. It is also a good conductor of electricity and is used extensively in the manufacture of electronics components.

The transition to clean energy is expected to drive physical demand for silver in the coming years, particularly for connections in electric vehicles and for components within solar panels. The rollout of 5G, or fifth generation, telecom networks is also set to become a growing source of demand. But these demand factors are likely to play out in a big way for silver in the future, not right away.

For now, silver’s use across a range of industrial applications has an effect on its price—when manufacturing activity rises, the price increases due to high demand, while a fall inactivity, such as during a recession, pulls the price lower.

For that reason, global monthly manufacturing PMIs, or Purchasing Managers’ Indexes, are an important gauge of silver demand, as it provides an indication of industrial activity.

The global PMI compiled by JP Morgan and IHS Markit fell to a six-month low of 54.1 in August 2021 from 55.4 in July as output growth lost momentum in several major markets (a number above 50 indicates an expansion in manufacturing activity, while a figure below that figure points to a contraction). This significantly weighed on silver in recent months.

Adding to that bearish factor has been speculation since June on when the Federal Reserve will be ready to roll back its excessively generous monthly stimulus that has carried the US economy since March 2020.

Both these clouds have cleared now, with the reading for JPM’s global PMI steadying at 54.1 in September.

The Fed also affirmed this week via the published minutes of its policy-making committee’s meeting in September that the start of its stimulus taper would likely begin in November or December and conclude by the middle of next year.

The central bank suggested a rollback of $15 billion that would end, in eight months, the $120 billion it was spending every month to buy bonds and other assets to support the economy amid the COVID-19 crisis.

The Fed announcement brought clarity and assurance to investors that the pullback in monetary support will be gradual. More importantly, the Fed stressed that it was not in any rush to hike interest rates held at between zero and 0.25% since the start of the pandemic.

With these risk-supportive elements in place, the spot gold price sprung from the mid-$1,700 levels to around $1,800. Silver’s next target would be to close in on the $24.80 level it has been circling for a while. Nonetheless, unless gold is allowed to close above $1,800 in the coming sessions, and more importantly above $1,835, bears are very poised to sell the rallies. – Barani Krishnan

A Red Hot Trajectory for Silver

Sprottmoney – Many of the base/industrial metals have been surging of late, and copper appears to be next. What impact, if any, can we eventually expect this to have on the price of COMEX silver?

Let’s start by recognizing that the ongoing bull market in commodities is a real thing. With the rapid acceleration of fiat currency debasement since the onset of the Covid Crisis, hard assets have surged as shortages have developed. As you can see below, the Bloomberg Spot Commodity Index recently hit a new all-time high, eclipsing the levels seen in 2008 and 2011. 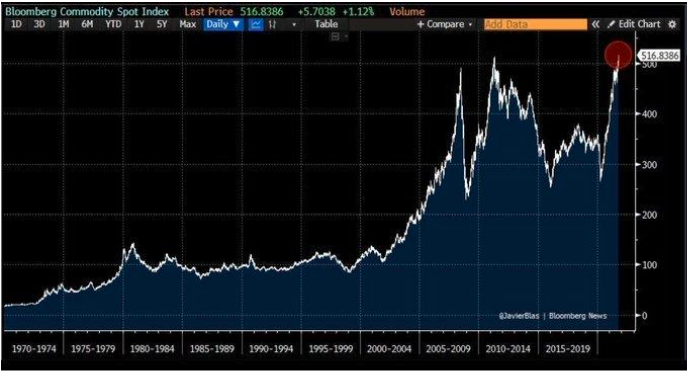 And within the sector, individual commodities have taken turns soaring toward new multi-year or all-time highs. Consider the base/industrial metals below, but also recall that 2021 has seen massive rallies in other items such as iron ore, cold-rolled steel, and lumber. 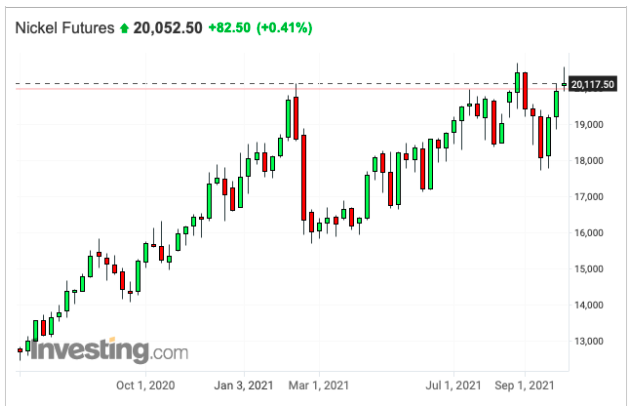 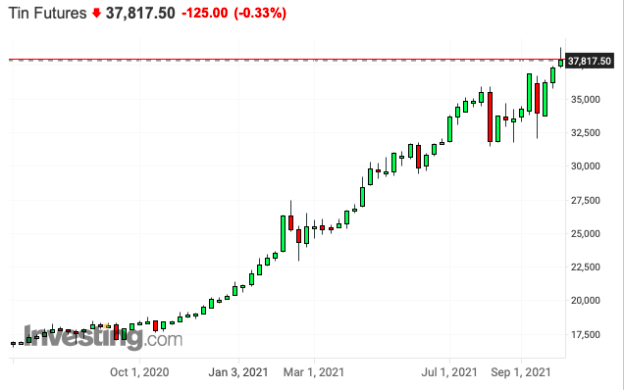 Next, you’ve likely heard (and felt) that energy prices are at multi-year highs, too. Crude oil and natural gas have been trading at levels not seen since at least 2014. And check Chinese coal. Holy moly! 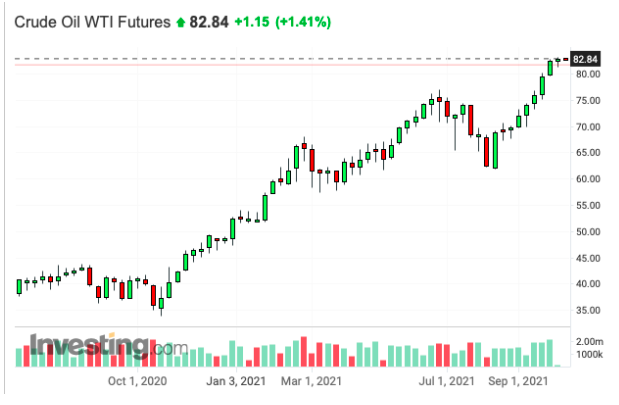 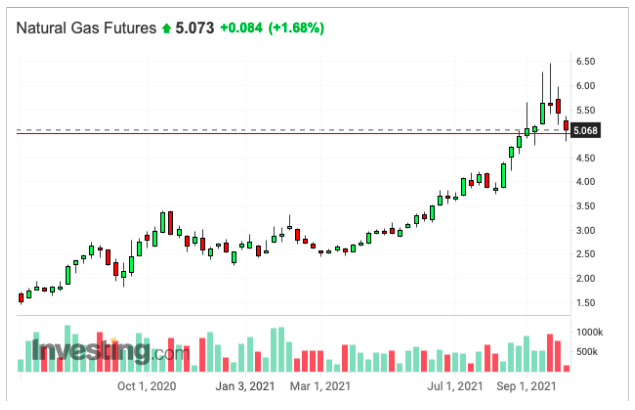 This brings us to copper…silver’s cousin. Copper prices have also surged of late, but copper is not yet at the same multi-year high levels as another base/industrial metals, and it has certainly not yet seen the type of explosive move to new highs witnessed in some of the other commodities this year. It is, however, very close to making new all-time highs, as you can see below:

A surge to new all-time highs? Copper trading at $6 or $7? Does this sound crazy to you?

Well, what if I showed you the most recent Commitment of Traders report for copper? Look below at the disaggregated report from last week. What do you see?

I’ll tell you what I see. Notice that BOTH the swap-dealing Banks AND the managed money hedge funds are net-long COMEX copper contracts. The only side net-short is the producer/hedgers. So if the price suddenly spikes through $5.00, from where will the new contracts be issued to contain the price? Maybe a few producers will hedge a bit more, but what incentive would The Banks or the funds have to step in the way and sell or short? None. Therefore, things could soon get disorderly in copper, and those $6 and $7 levels could come into focus quite quickly.

We may already be seeing signs of this appearing in London this week. While this may be a short-term anomaly, it also could be a clear signal of things to come. 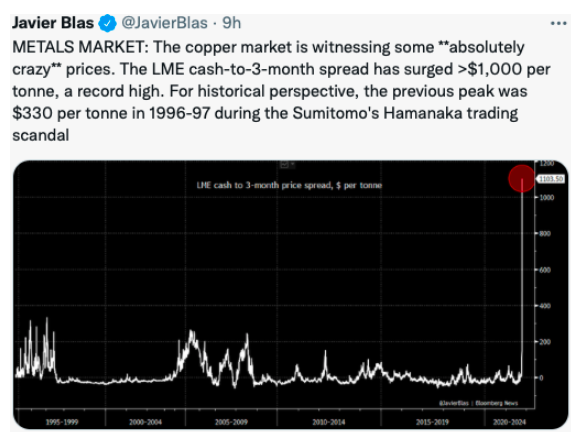 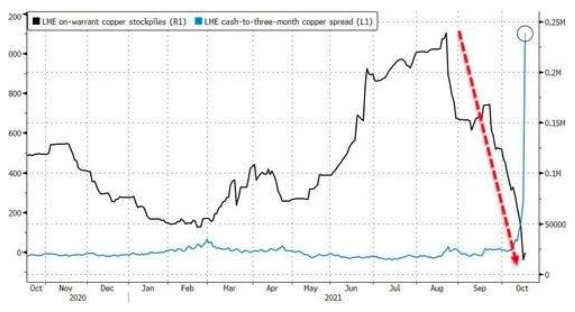 And this brings us back to COMEX silver. Recall that many of us who stack physical silver do so because we still think of it as a monetary metal. But we are in the distinct minority! Almost the entire investment world thinks of silver as a base/industrial metal instead. Here’s just one example:

And let’s check the Commitment of Traders report for silver, too. Look below and you’ll see that the swap-dealing Banks are currently NET LONG for the first time since late 2018. Oh, and what happened in late 2018? COMEX silver bottomed near $14 right before The Fed’s most recent “policy error” overwhelmed the markets, sent the stock market reeling, and led to a formal change in June of 2019.

In short, if copper eventually follows the base metals and the energy sector to new all-time highs, it is highly likely that COMEX silver will tag along for the ride since it’s considered a “base metal”, too. COMEX silver may not immediately extend to its own new all-time highs, but if copper is seen trading with a $6 or $7 handle, silver’s not going to be at $23. I can assure you of that.

So go forth and prepare accordingly. Keep a close eye on ole “Dr C” and watch for new all-time highs. Once that occurs, don’t be surprised by what happens next.