The 45th Annual General Meeting of India’s most valued company (by market capitalization) was addressed by the stalwart Mr. Mukesh Ambani. The Reliance Industries (NS: RELI ) AGM was a closely tracked event after key announcements about Reliance Industries’ foray into Green Energy in 2020 and the entry of Google (NASDAQ: GOOGL ) as a minority investor in 2021.

This year was no different. The company made headlines for its announcements related to the rollout of 5G services and the grand succession plan being taken forward.

Comments by Fed chairman Jerome Powell at the Jackson Hole Economic Symposium on Friday led to a crash in US equity markets and the Indian benchmark indices were also affected on Monday following the meet. Reliance Industries is the biggest contributor to the Nifty 50 and BSE Sensex , and today’s AGM made no difference to its stock price or the index. The index closed 1.40% down with heavyweights in IT, Metals, and banks leading the crash.

Before the start of the AGM, Reliance Industries showed some early signs of gain, however, the stock couldn’t handle the pressure of Friday's event and closed in the red. 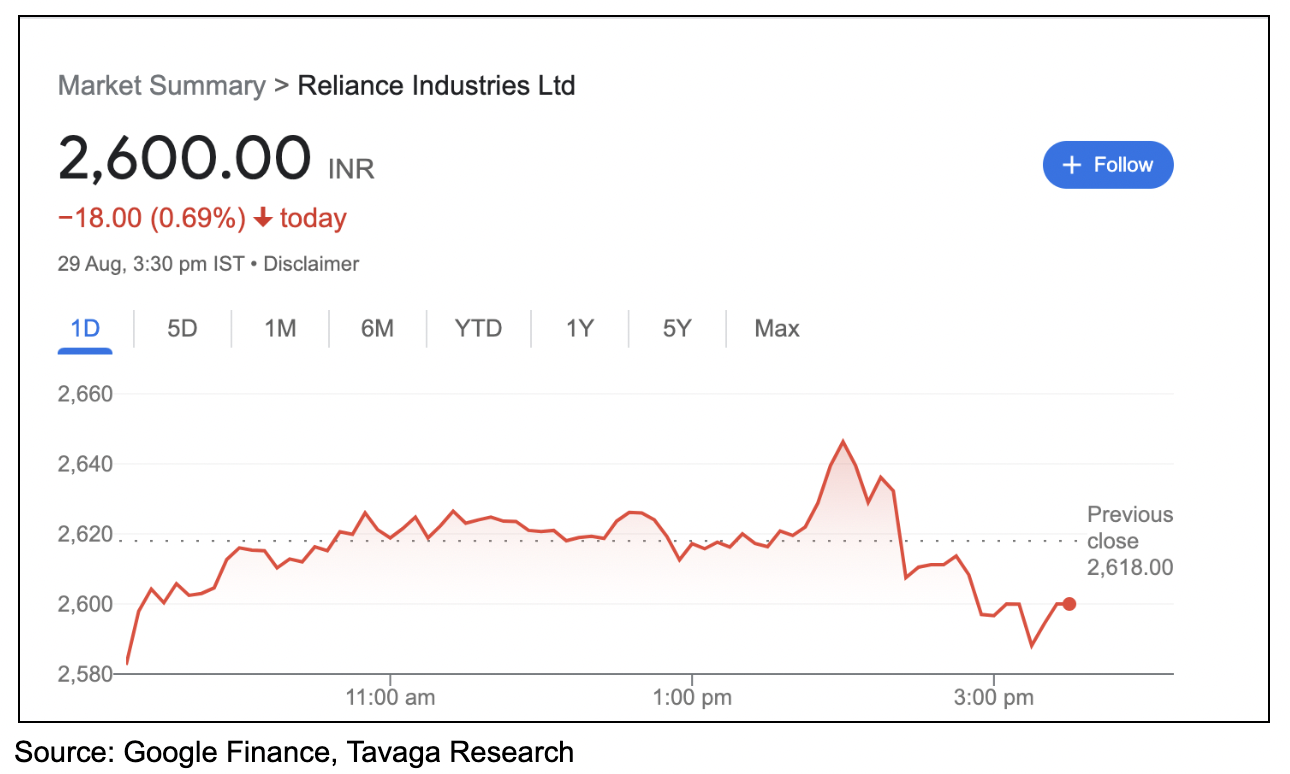 In a first, the Reliance AGM was conducted on a virtual reality platform, making it the first company globally to do so.

Reliance Industries continues to be India’s largest taxpayer and has shown constant growth in its exports over the years.

On 5G and Technology

Mr. Ambani announced the world’s largest rollout of Jio 5G services in Mumbai, Delhi, Kolkata, and Chennai by Diwali 2022 and all other towns and cities by December 2023. The network will be built on the Stand-Alone (SA) 5G network instead of the Non-Stand-Alone (NSA) 5G network. At its core, the NSA 5G network is akin to a 4G network, while the SA 5G network will be the truest 5G service that will reduce latency and improve the network performance, etc. For this, the company has committed a total investment of 2 lakh crores.

For its 5G standalone services, Reliance Industries has partnered with Meta Platforms Inc (NASDAQ: META ) for its immersive technology and metaverse;  with Google for 5G smartphones and cloud; with Microsoft (NASDAQ: MSFT ) for cloud-enabled applications; with Intel (NASDAQ: INTC ) for power-packed data centers; and with Qualcomm (NASDAQ: QCOM ) for 5G solutions. Further, Akash Ambani, the chairman of Reliance Jio announced the launch of its hotspot JioAirfiber. This will lead to a multi-fold increase in fiber access at homes and offices.

With the hopes of India leading the 4th industrial revolution, Mr. Mukesh Ambani also spoke about bringing smart sensors and intelligence solutions to trigger the Internet of Things.

The retail division of the oil-to-telecom conglomerate, Reliance Retail is all set to make inroads in the FMCG segment. The director of Reliance Retail Ventures Ltd. Ms. Isha Ambani announced this launch intending to deliver high-quality and affordable products.

Taking the next and probably the most significant step in its e-commerce venture, the company plans to integrate JioMart on WhatsApp, thus allowing the consumers to browse the grocery catalog on WhatsApp, add the products to the cart, and use the WhatsApp UPI Payment option for payments. This will not only be a seamless process for a consumer but also generate a major source of revenue for Meta. JioMart will be able to tap 500 million people without even asking them to download the JioMart Application / using a website to place orders. Such is the volume.

Reliance Industries plans to do a CAPEX of Rs. 75,000 crores over the next five years in its flagship petrochem and textile venture to expand the capacities of Polyester and Vinyl. It aims to build the world's largest single train Purified Terephthalic Acid (PTA) facility of 3 MMTPA capacity at Dahej in Gujarat alongside reinvesting in the expansion of Polyester Yarn and Polyester Fibre.

Acrylonitrile (ACN), a petrochemical product that is used widely in the production of chemicals, is next on the list. The company aims to begin its production in 2023.

Talking about ESG and net carbon zero targets, Mr. Ambani announced the doubling of bottle recycling capacity to 5 billion bottles in a year. Moreover, the company intends to use pathways to produce biodegradable and compostable plastics and replace single-use plastics. Further, taking a firm stance on turning net carbon zero by 2035, the chairman spoke about various initiatives for Reliance Industries’ green transformation.

To invest or not to invest?

Reliance Industries is a common name in every Indian household. While the company has performed well in the past and the future looks bright, investing is not only about knowing the business and listening to the commentary. Investing is also about measuring the risks and valuations. Buying a business at the right price and at the right time is important.

Team Tavaga recommends its readers to take advice from a SEBI Registered Investment Advisor before making any decision about taking a position in the stock.

Disclaimer: The above piece is not a recommendation.