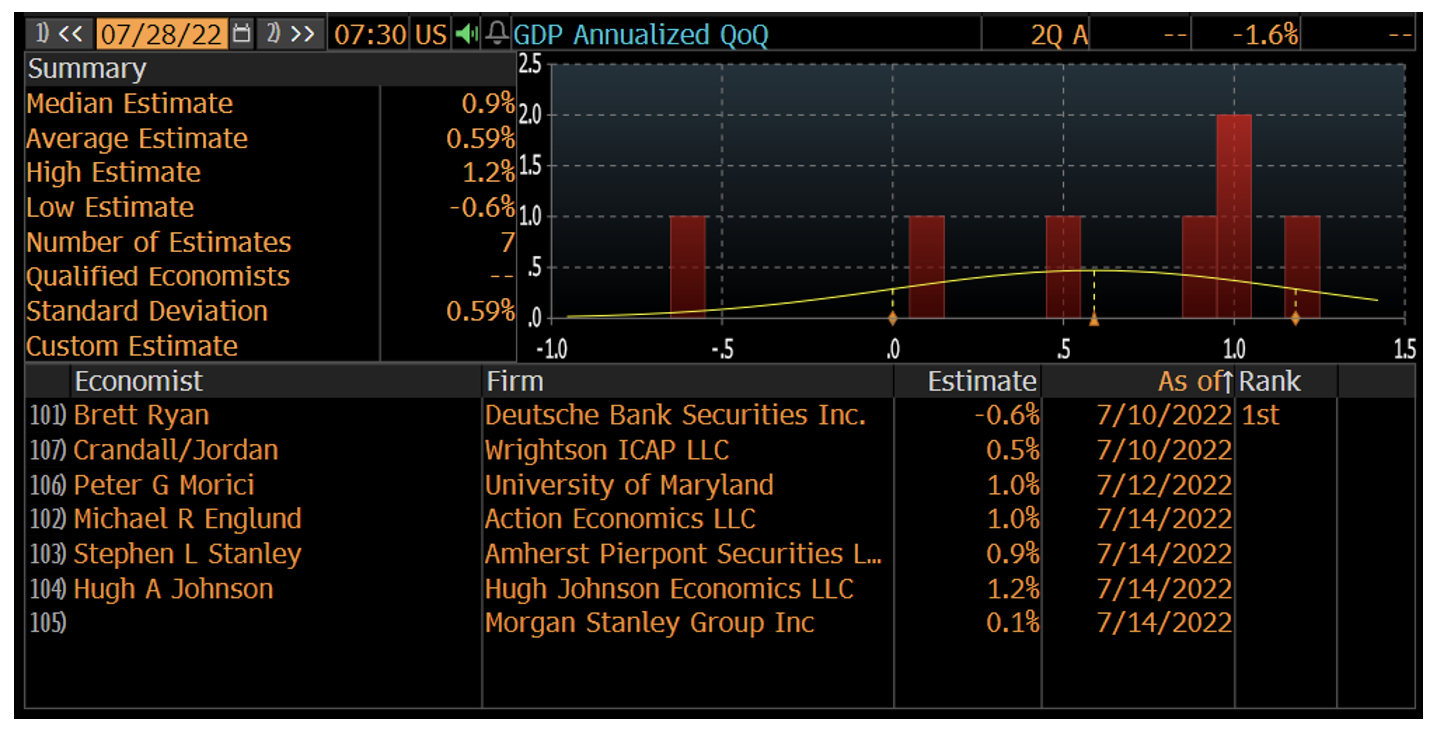 The definition of a recession is simply two consecutive quarters of below-zero growth. The National Bureau of Economic Research, however, makes the final call well after the fact. That group primarily looks at trends in employment to gauge whether the economy went through a recession. In this case, given such a robust jobs market (as evidenced by a solid June NFP report back on July 8), it’s quite possible that the economy contracts while monthly job gains persist.

Of course, nobody knows how it will all play out for the balance of the year and in 2023. Sell-side research firms and forecasters of all types seemingly live and die by each major economic data point.

There is an interesting indicator that offers clues on how well those data arrive relative to expectations. The Citigroup Economic Surprise Index (CESI) essentially measures the strength of economic data versus consensus estimates. Zero is the demarcation of better-than or worse-than-expected data. 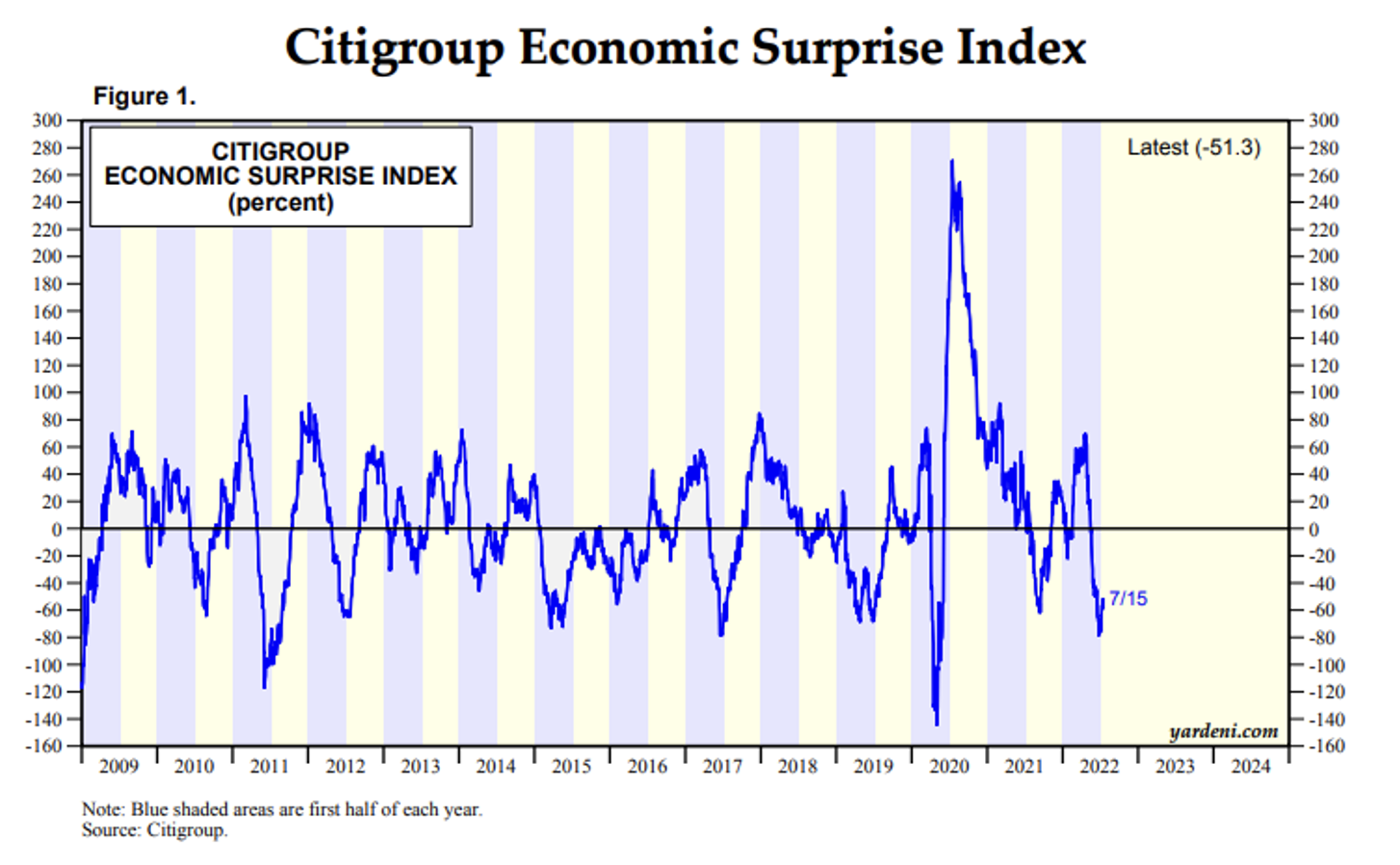 Right now, the gauge is solidly in the red. The reading fell to the lowest figure in more than two years just a few weeks ago as stocks hit their June low. With some encouraging news, like that strong employment report, the surprise index bounced back just slightly. For perspective, it surged to all-time highs during the middle of 2020 as the domestic economy bounced back much more quickly than many Wall Street prognosticators had thought. Not surprisingly (no pun), the S&P was already in the process of rallying sharply off the late-March 2020 bottom. It goes to show that price-action in stocks tends to lead economic news.

There’s another form of the economic surprise index I like to monitor. It is produced by Goldman Sachs Investment Research and compares how different countries’ data is doing versus consensus. What might surprise readers is that the U.S. is second only to Japan in terms of how bad recent numbers have been. The Euro area, China, and a few other major countries have been seeing ‘less bad’ or even better-than-expected data. 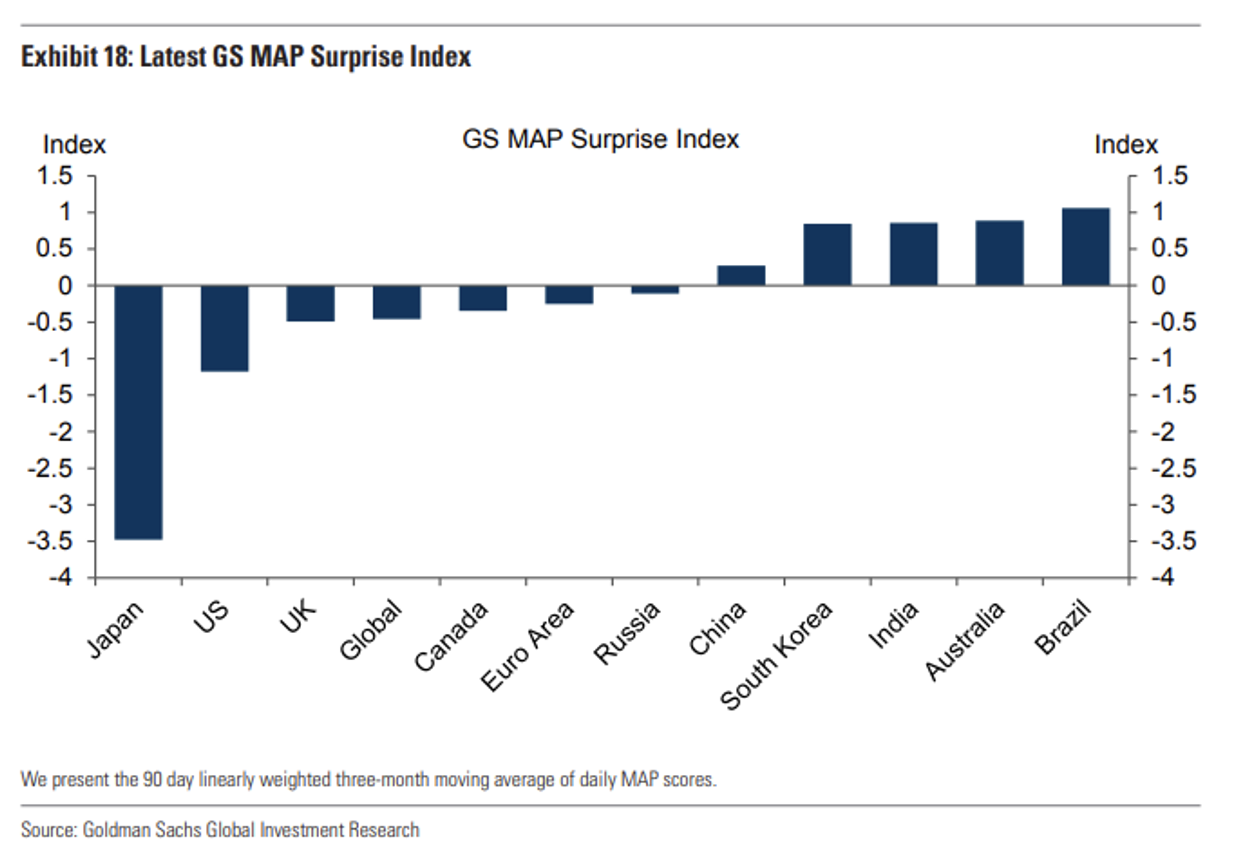 I assert that not only do corporate earnings estimates need to come down but so too do economic data forecasts. Evidenced by weak actuals versus estimates, there are growing risks of a true recession. I expect more bearish slashes to growth outlooks to come, much like what we saw out of BofA last week.

Disclaimer: Mike Zaccardi does not own any securities mentioned in this article.