Nifty understandably declined by 2% in today’s trade on the back of a trail of bad news related to the state of the Indian economy. It started with the government’s announcement of GDP growth numbers on Friday. The GDP grew by a mere 5% in the last quarter , which was way below expectations.

Then early this week, automakers announced their August sales numbers, which were quite grim. Maruti Suzuki India Ltd. (NS:MRTI) and Tata Motors (NS:TAMO) both announced 33% and 58% decline in August on a year-over-year basis.

Yesterday, the manufacturing output growth numbers came out. The chart below shows that the PMI index was 51.4 for August, which was the slowest for the last 15 months. Then last but not least, India’s infrastructure output growth was a mere 2.1% for July on a YoY basis. 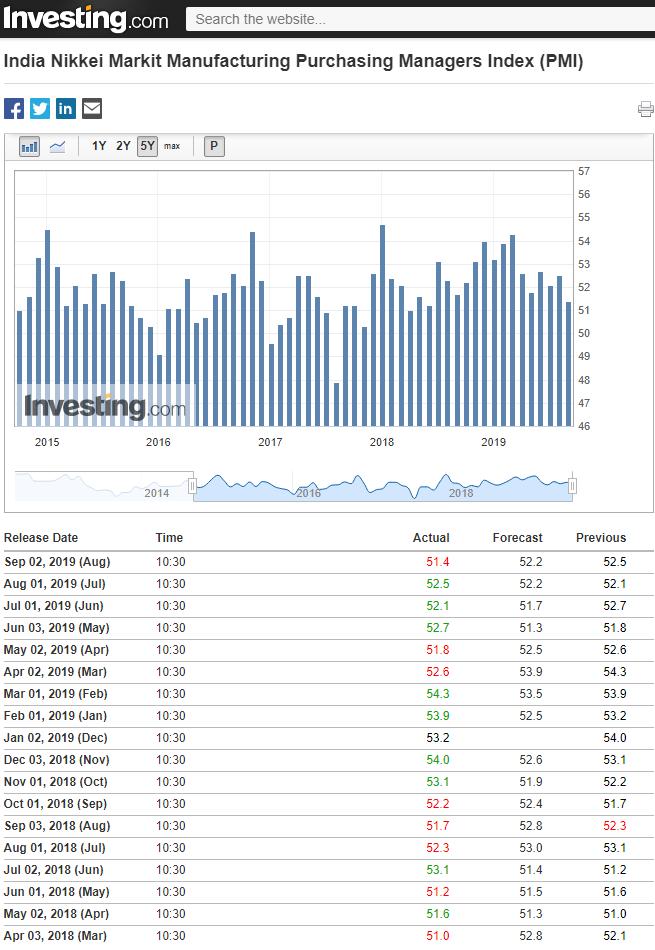 If the domestic situation was terrible, the global case made matters worse. The US-China trade war escalated when the US started imposing 15% tariffs on several Chinese exports beginning this Sunday. China reciprocated with its own set of tariffs on US exports.

If these set of news were enough to hurt the broader markets today, Nifty PSU Bank index declined by a staggering ~5%. The story of PSU banks merger that the Indian Finance Minister announced last Friday did not bode well with the investors.

While this decision taken by the government could turn out to be a good one in the long-term, there will be short-term headwinds that these banks will face. The immediate risks arise in the form of integration issues for the state-run banks. There is also a risk of loan growth slowing down, which could potentially hurt the credit crunch issue that India is facing currently.

On the brighter side, the Nifty IT index declined by a much smaller 0.16% on the back of weakening Rupee (see USDINR).