The FMCG sector has again started to pick up the pace, especially after the third downtick in CPI to 6.71% in July 2022. The Nifty FMCG index surged by a massive 12.8% last month, while the rally continued this month as well with a 1.12% gain so far to 42,964.1 on 16 August 2022. As growth is returning in this evergreen sector, one of the companies that would likely get support from this sectoral growth is Polyplex Corporation Ltd (NS: PLYP ).

It is not an FMCG player but manufactures and sells polyester (PET) film for the FMCG sector. The company began with a single PET thin film line of 4,000 tons a year in India and now has the seventh-largest manufacturing capacity in the world. These films are widely used for the FMCG products such as for lamination, packaging, print media segment, and for other industrial uses. The company’s core product line includes BOPET, BOPP, Blown, and CPP films, and polyester capabilities include both thin and thick PET film in a wide range of thicknesses covering a broad spectrum of applications. 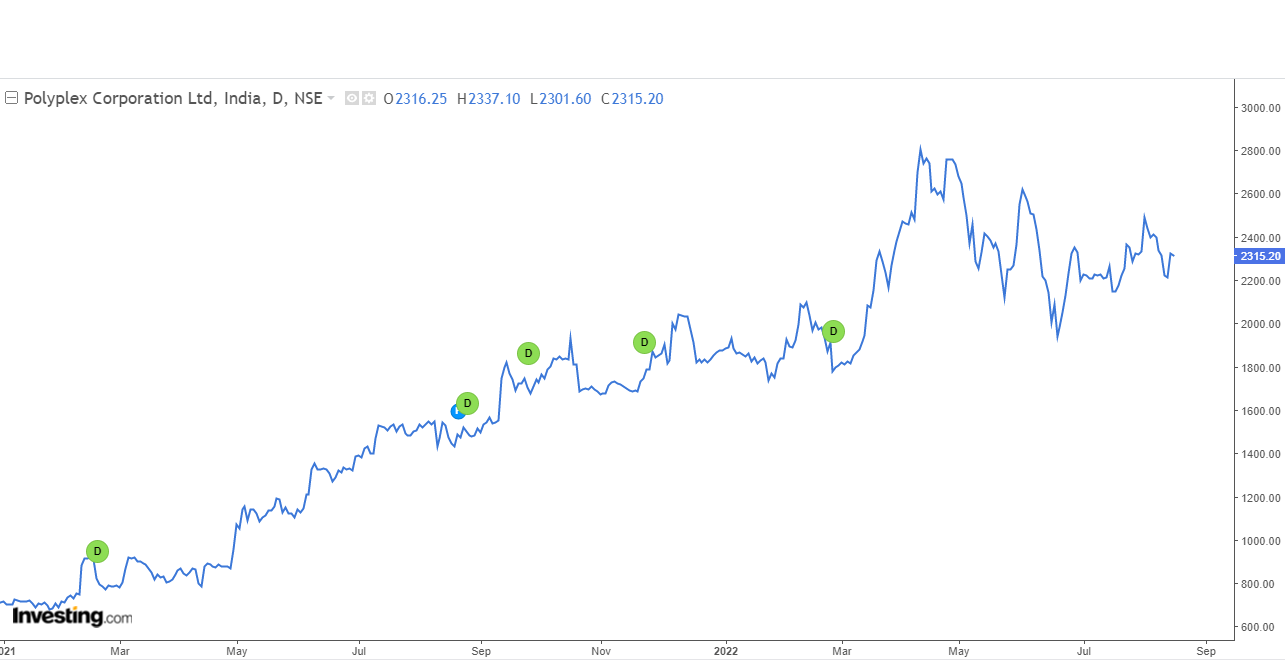 Despite having a presence in over 75 countries with around 1,950 customers, the company is only INR 7,301 crores big, making it a promising candidate for exponential growth in the future. The revenue of the company has grown at a decent yearly rate of 14.86% over the last 5 years to INR 6,752.38 crores (consolidated) in FY22, while net income has risen at a yearly rate of 19.68% in the same period to INR 568.8 crores (consolidated) in FY22, which is the highest annual profit the company has ever recorded.

Despite being a small-cap it is a regular dividend-paying company, with the latest payout of 0.57 (FY22) and currently, Polyplex shares are trading at a lucrative dividend yield of 4.47%. Not just that, the stock has also delivered a gigantic return of 426.65% in the last 5 years (excluding dividends).

Foreign institutional investors (FIIs) are also taking a keen interest in the company. FIIs’ stake has risen from 7.71% in June 2021 to 12.78% in June 2022, with every single quarter seeing a rise. In fact, it’s a rare chance that one gets to see a double-digit FII stake in a small-cap company as these astute investors generally stick to industry leaders. However, as they are ramping up their stake in the business, it definitely boosts confidence.

As the FMCG industry is on its track to continued growth, the global film industry would likely to see an upward trajectory. However, other factors such as urbanization, increasing demand for better packaging over health and safety concerns coupled with newer technologies, and rising disposable income are likely to keep the ball rolling for Polyplex Corp.