US futures on the Dow , S&P , NASDAQ and Russell 2000 were trading mixed on Wednesday ahead of the US session open while European stocks continued to post records.

US contracts wavered with NASDAQ 100 futures outperforming while contracts on the Russell 2000 were slightly in the red, illustrating a reversal of the reflation trade. The same pattern was visible yesterday with US futures trading in negative territory before the open while European stocks continued carving out new highs and then all four US indices rallied during the New York session to close in the green.

The tech sector helped the NASDAQ to outperform on Tuesday. That same tech outperformance is also evident in Europe today.

Siemens (NS: SIEM ) Healthineers (DE: SHLG ), a German medical tech company, opened 1% higher and extended its advance to 4.3%, after it raised its earnings expectations. The company cited its recent takeover of US radiation oncology treatment and software maker, Varian and potential synergies of more than €350 million by 2025 as one of the drivers of the improved performance outlook. 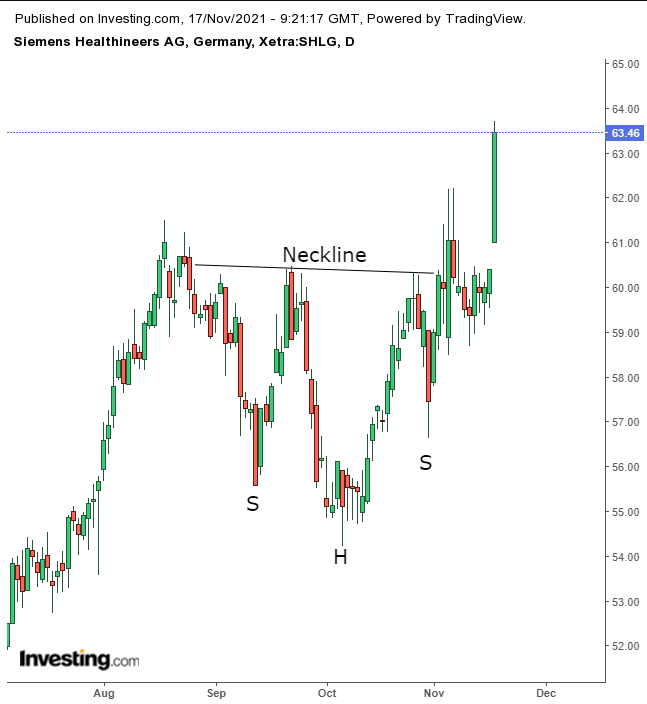 The jump completed an H&S continuation pattern, promising the minimum objective of €66.

Swiss luxury firm Richemont (SIX: CFR ) gained for the fifth straight day, up 1.7% to an all-time high, after brokers increased share price targets on the stock.

Stocks in Asia were lower. Japan's Nikkei slipped 0.4% as the automobile sector fell after the country's automotive industry reported a 9.4% rise in exports in October, the lowest level in eight months.

China's Shanghai Composite gained 0.44% ahead of tech mammoth Baidu (NASDAQ: BIDU ) reporting its third-quarter results after the market there closed.

Earnings from Walmart (NYSE: WMT ) and Home Depot (NYSE: HD ) demonstrated strong consumer demand despite a deterioration of buying power amid the highest inflation in thirty years. It appears that inflation is not standing in the way of consumers which is positive as consumer spending makes up 69% of the $23.2 trillion US economy.

Market strategists at Goldman Sachs are also positive on the US stock market and have increased forecasts for the S&P saying they expect the index to increase 9% to 5,100 by the end of 2022.

Meanwhile, the yield on the 10-year Treasury remained above 1.6% on the continued argument for a tighter financial approach by the Federal Reserve. Dealers are keenly waiting to see the strength and quality of demand for a 20-year bond auction later today.

The dollar traded higher against the yen and the euro after US retail sales data posted the greatest jump since March. 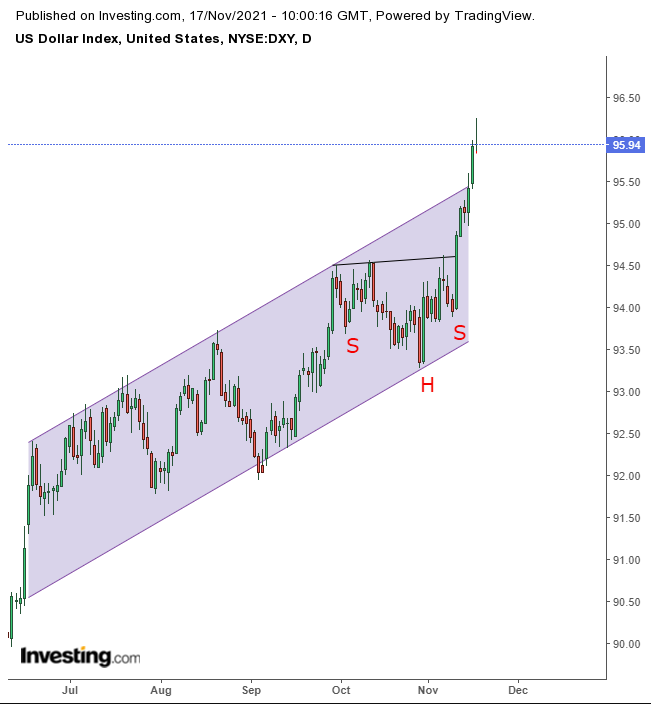 The greenback retreated from its highest levels since mid-July, after breaking through a rising channel, with the help of an H&S continuation pattern, suggesting a steeper ascent. However, the current weakening may signal a return move.

Gold jumped despite the dollar's strength. 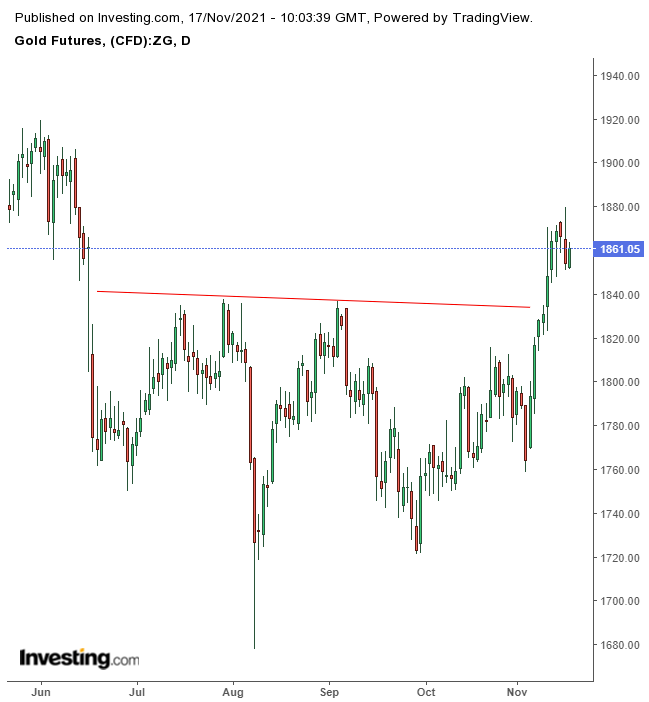 Perhaps what's being signaled is the end of the post-H&S bottom breakout return move.

Bitcoin extended its decline for the third day straight and traded below $60,000. 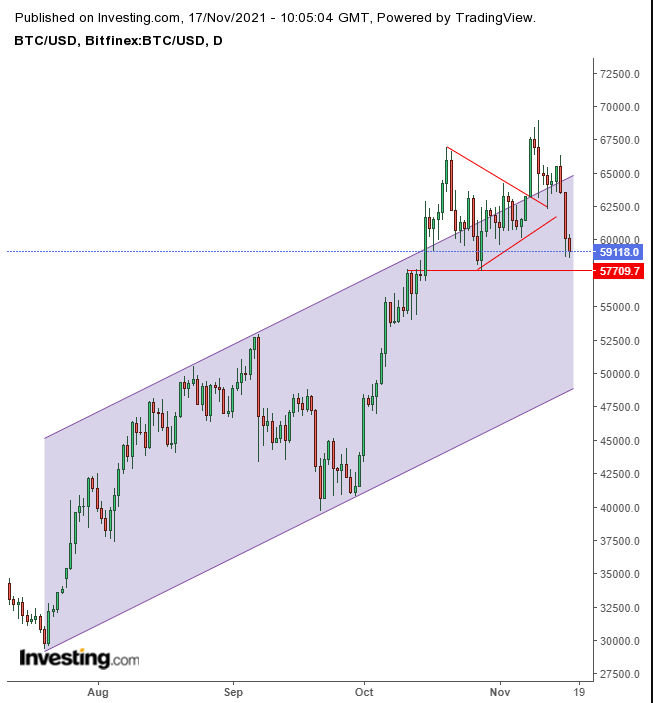 The pennant seemed to fail and now the crypto might be developing a small H&S top that would send the digital token to retest the bottom of a rising channel.

Oil declined as market specialists weighed the chances that the Biden administration would tap oil reserves in a coordinated move with China. 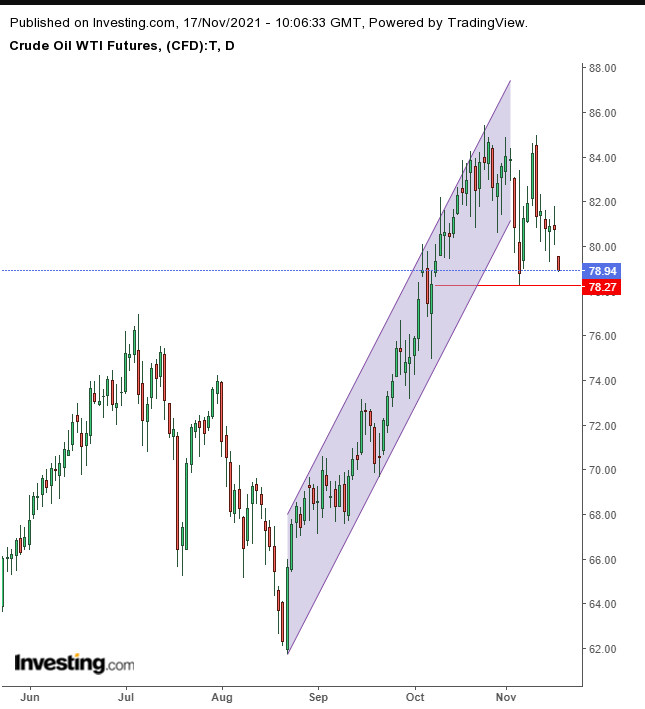 The price was headed toward the neckline of an H&S top, which will complete if the $78 level is penetrated.