US futures tracked European stocks lower amid a Chinese COVID flare-up that weighed sentiment ahead of US second-quarter corporate results. Investors will gauge companies' success in profitably operating their businesses in the face of extraordinary economic challenges.

Last week's exceptional returns in the stock market were confusing to analysts, contradicting the market narrative that investors' primary focus is interest rates. Nevertheless, Friday's upbeat employment data ended the rally, with the Nasdaq 100 being the only positive US index with a 0.1% gain.

I made the case in the Week Ahead post that psychology had the most significant impact on recent market activity, as bargain hunters emerged after US markets suffered their worst first half-year since 1970. Furthermore, I demonstrated how stocks slowed down after Monday's surge until they reached a standstill on Friday.

I predicted that stocks would decline or significantly slow their ascent this week. In addition to my explanation in the weekly post, let me share with you the following chart. 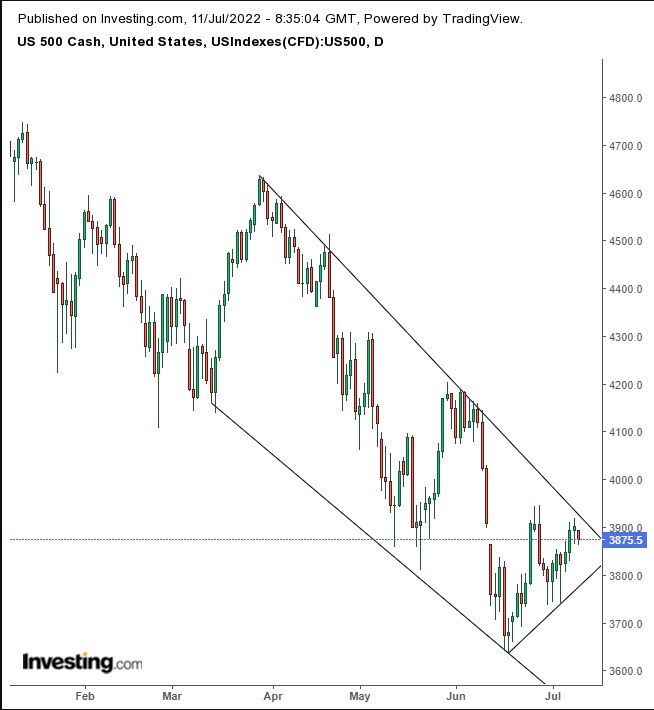 The S&P 500 futures contract is declining from the top of the falling channel, increasing the chances of trading back toward its bottom.

Small caps and technology stocks continue to lead market movements, both up and down. These two equity classes are highly susceptible to rising rates.

On the one hand, small companies don't have the resources and flexibility large companies have with money and accounting to weather falling money supplies and higher borrowing costs.

On the other hand, technology companies' valuations are already at sky-high levels. Therefore, investors rotate to value stocks that have been neglected till now, providing more value.

At the time of writing, the Russell 2000 futures contract was down almost 1%. The Nasdaq 100 futures was the second worst-performing index in the pre-market, falling 0.75%, as growth stocks are the first to be thrown to the wolves amid a turndown as investors seek bargains.

The technology-heavy index also feels the blow of a 6.8% sell-off in Twitter (NYSE: TWTR ) pre-market after Elon Musk backed off on his $44 billion bid on the social media firm.

Twitter already sold off on Friday on the reports of Musk's terminating the deal, pushing the price to complete a bearish pattern. 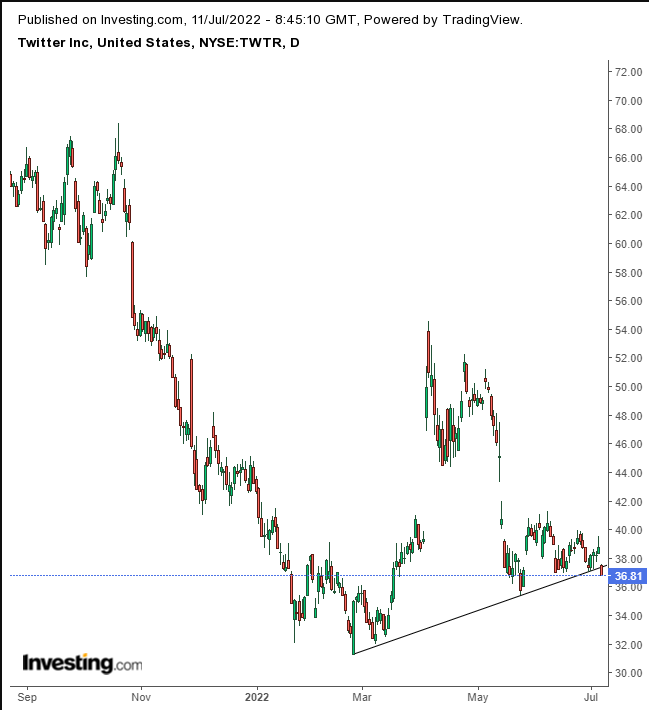 The stock may have completed an upward-sloping H&S continuation pattern. If prices fall below $35, it will reinforce the sell-off, which I forecast would retest $30, and it could penetrate as far as $20.

Treasuries rose as investors sought safety, pushing yields back down, but the  yield curve remained inverted, flashing recession warnings (a leading indicator of a recession is when long-term bonds pay less than the shorter ones). 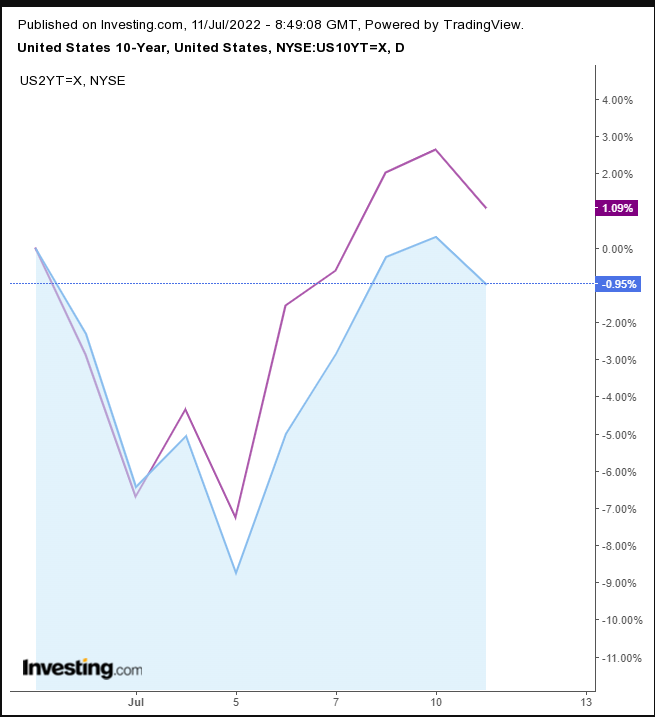 The U.S. dollar index rose to the highest since Oct 25, 2002. However, I expect the Greenback could weaken as it goes up against a shooting star, a sign of bearish presence. The US currency may be due a correction, at least to retest the closest uptrend line. However, I will reverse my position if the price closes above 108.

Gold declined slightly, but its haven status appears to have kept it relatively unchanged amid a strengthening dollar. 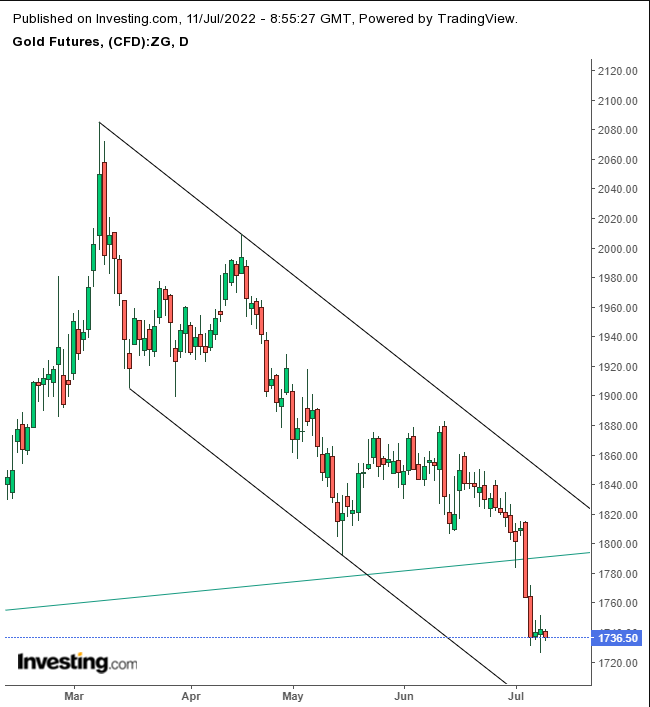 After falling below its year-long uptrend line, I expect gold to continue along its falling channel. 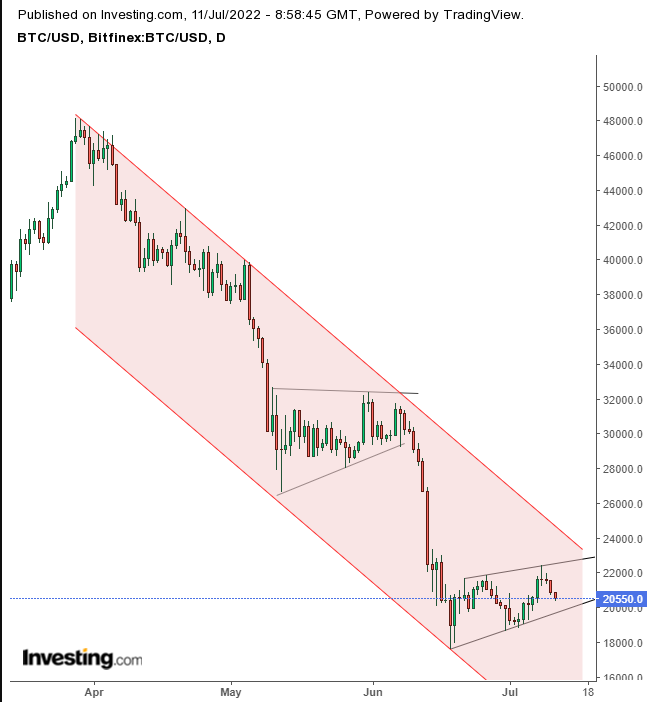 Bitcoin may be developing a second rising flag, bearish within its falling channel. If this scenario follows through, it will reinforce my long-term, oft-repeated bearish calls. Here is an example from the beginning of the year, which is still very relevant now.

Oil ended a two-day rally and returned to losses, below a bearish pattern. 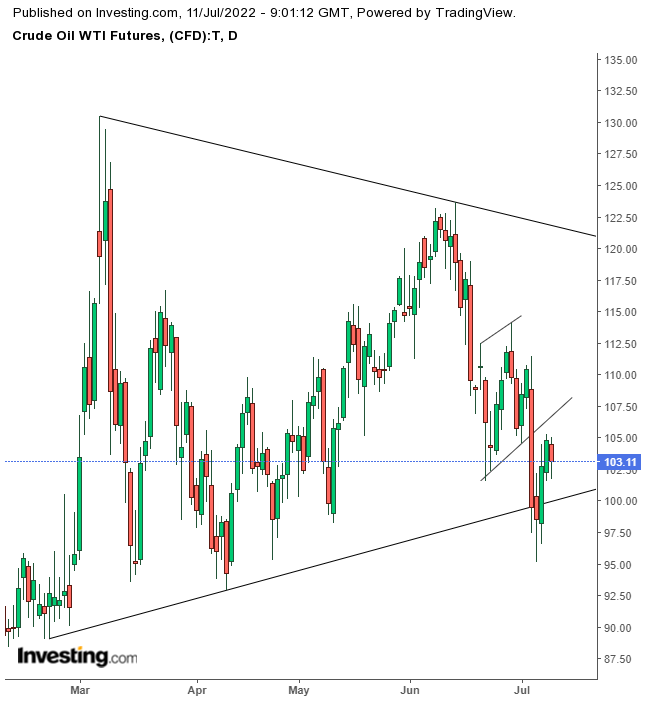 Oil is retesting the rising flag, bearish after the preceding decline, which may successfully end its return move. A downward push will also decisively complete a larger bearish triangle pattern.