To oil traders, attempts to revive the Iran nuclear deal have become monumentally dreary. Repeat cycles with the same ending each time leading to the only valid question: Is it going to be any different this time?

Thus, as yet another process gets underway to revive the original 2015 nuclear deal between Iran and six world powers, a good part of oil markets remain doubtful whether the negotiators really want an agreement. 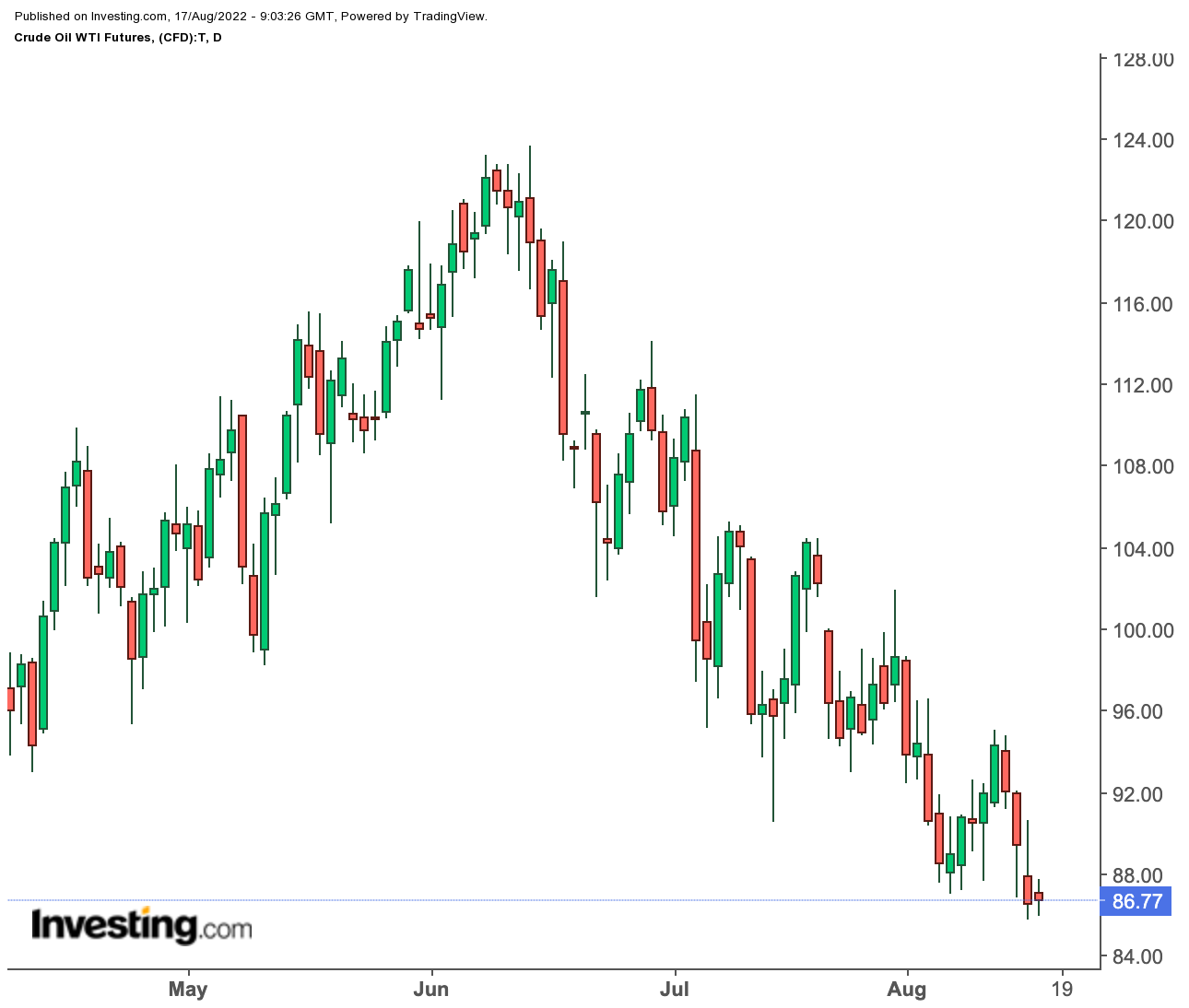 This is despite crude prices hitting 6-½ month lows this week on the prospect that a revived deal will de-sanction Iranian oil, bringing an estimated 1.3 million barrels more each day to a market where demand doesn’t seem to be all that great.

The trade’s skepticism about a successful outcome is understandable. Ten rounds of negotiations have been held since April 2021, with the Biden administration appearing less enthusiastic than the European Union (EU) each time—despite the original agreement being hatched in the Obama White House which President Biden was a part of, before it was canceled by the Trump administration on suspicion that Iran was ramping up efforts to build an atomic weapon.

Tehran has reportedly made alarming strides in uranium enrichment and other nuclear bomb processes since the cancelation of the deal in 2018 and imposition of sanctions on Iranian oil by Republican President Donald Trump.

Iran has steadfastly denied having an agenda for atomic weapons, saying its nuclear capabilities are purely for power generation and other peaceful use, which few outside the country believe. Democrat president Biden also did not overturn the decisions made by his Republican rival upon entering office in January 2021.

Now, 20 months later, we still do not know if Biden, who recently ended a 'diplomatic cold war' with Iran’s arch-enemy, Saudi Arabia, really wants the nuclear deal back.

In recent months the Saudis have restored a modest portion of the huge oil production cuts by OPEC+ after the COVID-triggered market collapse of 2020. The higher output has helped bring crude prices back below the 14-year highs hit in March, when Russia invaded Ukraine, lowering both gasoline prices from record highs and US inflation from four-decade peaks. But Saudi-Russian complicity within OPEC+ also makes it difficult for Biden to expect more from Riyadh.

While there’s no way yet of knowing what the outcome of the latest EU-led initiative on Iran will be, we have ideas of what to expect regardless of whether there’s a deal.

West Texas Intermediate, the benchmark for US crude, tumbled to $85.73 per barrel this week, its lowest since January 26, and almost 35% down from the peak of $130.50 it hit on March 7, after the Ukraine invasion.

With uncertainty over the Iran outcome hanging large and dark over the market, most traders are discounting WTI’s return to $100, or Brent trading above $105 until the decision on the nuclear deal is known or there’s more clarity over the matter.

Analysts at ING said in a note said there was potential for Iran to bring some 1.3 million barrels per day to the market over time.

One of the relief measures for Tehran under the proposed accord could be the unfreezing of about $7 billion in Iranian funds stuck in South Korean banks under the sanctions imposed by Washington. This could be in exchange for the release of Western prisoners held in Iran.

Some 12 million to 14 million barrels of Iranian crude are also estimated to be held as 'bonded storage'—the oil has not been cleared through Chinese customs and is not being used, therefore not yet violating the sanctions—in Chinese ports, awaiting the U.S. go-ahead for them to be put to commercial use. The oil made its way to China before the reimposition of sanctions on Iran by Trump.

If all these hit the market, they could put commensurate weight on crude prices over the coming months, said Ed Moya, analyst at online trading platform OANDA, adding:

“We’ve been here before and have seen talks fall apart. What is a little different this time is that it seems the Iranians are willing to discuss the terms. If the Iran nuclear deal is revived, that could send oil prices down to the low $80s.”

Yet technical charts indicate that WTI is oversold and there's a fair chance for it to rebound, especially if weekly crude and gasoline inventories released by the US Energy Information Administration turn out to be supportive to demand.

“WTI has approached oversold territory. Though prevailing bearish momentum can make some more dents, we see that it has limited downside till the monthly middle Bollinger Band’s horizontal support of $85 is breached.”

Duration For An Outcome

There was little known of the progress in the negotiations itself on Tuesday, as it would be in the case of anything where the 'devil was in the detail'.

For the record, the EU sent what it described as a 'final' offer to Iran, after 16 months of fitful talks. It also said there was “nothing alarming” in the response from Iran, received late on Monday.

Approval by the EU raises the chance of the Biden administration also accepting it—subject to the usual caveats of U.S. politics.

"For the moment, we are studying it and we are consulting with the other JCPOA participants and the U.S. on the way forward," an EU spokesperson said Tuesday, referring to the body behind the nuclear deal known in full as the Joint Comprehensive Plan of Action. Under the plan, the five permanent members of the UN Security Council—Britain, China, France, Russia, and the U.S.—are signatories to the nuclear deal with Iran, with a sixth world power, Germany, joining as the EU’s representative.

While the amount of time the different parties, especially the U.S., take in coming together for a decision might vary, the general thinking among oil market participants was that a two-to-three week timeline for an announcement would be a safe bet.

“I think we’ll have a decision before Labor Day,” John Kilduff, partner at New York energy hedge fund Again Capital, said, referring to the September 5 U.S. holiday that comes about two weeks before the start of the fall season.

The simplest way to put it is both the principals in the deal—the United States and Iran—want a 'win.' And that could range from demands for a tangible victory to one where the optics were good enough for both sides to accept.

As of February, during the most 'serious' round of the talks this year, Iran’s demand was that all sanctions against it be dropped first before it retreated on its nuclear programs. The White House has repeatedly said that demand was a non-starter for a deal, and that Tehran had to show commitment first to the nuclear non-proliferation treaty. This tit-for-tat has largely continued for the past six months, though Iran’s latest response to the EU indicates it may be more agreeable than before to meeting the U.S. demand before putting its own forward.

As of February too, Iran wanted guarantees that the U.S. will not cancel the pact again and also sought solutions to questions over uranium traces found at several old but undeclared sites in Iran.

A draft earlier this year of an enhanced accord offered by Western powers to Iran suggested that various phases of surveillance and engagement be deployed to bring Tehran back into compliance with its 2015 nuclear agreement.

Most importantly, according to reports then on the draft, Iran has to immediately stop further uranium enrichment that would advance it toward achieving full bomb-grade capability.

Only if it can withstand that stick, would the carrots follow—i.e. billions of dollars of previous oil sales money legitimately withheld from the Islamic Republic’s coffers and the gradual removal of sanctions that would let it export its oil freely—albeit with continued monitoring of its nuclear commitments.

The main recurring points of discontent in the Iran-world powers talks of the past year have been the West’s definition of Tehran's nuclear program; its allegations about levels of nuclear enrichment that have transgressed limits and the preconditions that the republic must meet for sanctions liftoff.

Western nuclear inspectors say Tehran breached many restrictions in the 2015 agreement after Trump pulled the U.S. out of the pact. While the original accord capped uranium enrichment at 3.67% fissile purity, Iran as of February was enriching to up to 60%, close to weapons grade, according to sources quoted then by Reuters. Nuclear Deal 2.0 would call on Iran to suspend enrichment at above 5% purity and return to the core 3.67% eventually.

According to Kilduff, the partner at hedge fund Again Capital:

“It’s like a dating game for these two. But are in it, and they are playing to either win, or to walk away and still look good. The U.S. wants the girl but it doesn’t want to look too desperate.”

What Will OPEC Do If Iran Sanctions End

One of the biggest posers in the oil market is the impact an Iran liberated from U.S. sanctions on its oil could do to the 13-member Saudi-led OPEC, which together with Russia and nine other allies stands as a 23-nation strong oil cartel. Iran has always been part of both OPEC and OPEC+, although it has not contributed to a barrel of production cuts by the group over the past five years due to the sanctions imposed on it.

OPEC+ has benefited not just from multi-year highs in crude prices as a result of the Russian invasion of Ukraine. It has also benefited from U.S. sanctions imposed not just on Iran but also on Venezuela and now Russia.

The revived nuclear deal could change that, putting greater competition among OPEC+ members for market share. With the return of a hungry and competitive Iran to the crude market, OPEC+ production policy, as we know it, might see a radical change.

One theory is that the alliance’s individual members might produce more to compete with Iran, depending on how much oil it brings to the market. At the height of non-sanctions years, Iran produced as much as 4 million barrels daily at one point, though its capacity now is more likely at 2 million.

The other theory is that the Saudis offer an olive branch to their long-time archrival Iran, convincing the Islamic Republic to join OPEC+ in 'balancing the market' with responsible production. This idea was floated as early as February by OPEC as a means to prevent intense rivalry for market share upon the end of the Iran sanctions.