Earlier Wednesday, Nifty made another record high around 14241.40 on India’s progress of COVID vaccinations from two approved vaccines (as EUA & limited EUA/back up), aiming to vaccinate almost 300M vulnerable people by Dec’21. The mass-vaccinations for India may start by Jan’22. In any way, India’s corona curve is flattening at a fast rate and now the economy is operating at almost 90% of pre-COVID levels. But India’s consumer-facing service sector like travel &tourism, leisure, education, and hospitality is still functioning only partially amid various COVID-related restrictions and consumer’s scarring factor.

On Wednesday, Markit data shows that India’s Service business activity PMI index declined to 52.3 in December sequentially from 53.7 (November), and below market expectations of 54.0, also at a 3-months low. Although this is the 3rd straight month of monthly expansion (>50.0) in the service sector, the rate of growth tapered after topping in October, just ahead of the Festival season. Overall, unemployment and inflation surged, while export was soft due to lower USDINR . India’s composite PMI output index also slips to 54.9 in December from 56.3 in November amid slower rates of expansion at both manufacturing and service providers.

The Markit said about India’s service PMI index for December that although there is still expansion, the growth momentum seen from October is clearly tapering and unemployment is again rising. Markit hopes that once vaccines/vaccinations are available, there will be a sustainable recovery.

Although the news that the service sector remained in an expansion mode during December is welcome, the fact that growth lost momentum yet again shouldn't be disregarded. The slowdown is particularly notable given the size of the sector, the fact that the recovery only began in October and that monthly rates of increase in new business and output were moderate relative to those seen in the manufacturing industry.

A spike in COVID-19 cases was reported as a key factor restricting the growth of new work intakes among service providers, which in turn curbed the rise in output and led to increased business uncertainty about the outlook. Given the damaging impact of the pandemic on the service economy, some companies are facing financial difficulties, which are preventing staff hiring. December saw the ninth round of job shedding in ten months.

To add to the testing conditions services firms are facing, their expenses continued to rise while pricing power diminished. Input prices rose at the sharpest rate in ten months during December, but firms absorbed the increase in cost burdens amid efforts to stimulate demand. It is clear that the early part of 2021 will continue to be challenging, but we're looking at a sustainable recovery and some return to normality once COVID-19 vaccines become available.

India is mainly a service sector economy as almost 75% of the economic output (GDP) comes from this sector, which is the primary victim of COVID; especially consumer-facing ones. Overall, the Indian economy may contract by around -9.4% to -8.2% in FY21 (Apr’20-Mar’21) depending on a moderate to optimistic scenario. As the Indian mass-vaccinations for COVID may not start before Jan’22, looking ahead, although the FY22 GDP growth may be positive, it will be mainly for lower base effect in FY21 and also far away from nominal GDP output of above Rs.200T before the COVID-19. The Nifty earnings recovery should be also in line with India’s GDP trajectory going forward. As a ready reference, Singapore’s economy has contracted -3.8% in Dec’20 QTR after -13.4% and -5.6% contractions in the prior two quarters.

Overall, India’s Nifty-50 jumped almost +14.90% in 2020, outperformed Dow Jones Industrial Average by almost double on the faster reopening of the economy as the corona curve flattened visibly much more quickly than the U.S. or Europe. This is not only applicable to India but also most Asian countries, especially China, South Korea, and Japan. As the Indian economy is mostly domestic heavy, not export savvy like some of its SE peers, India is relatively more insulated from global shock.

Whatever may be the reason, be it the benefit of universal BCG vaccinations (soon after birth) or something else, India as-well-as other universally BCG countries have managed the COVID-19 pandemic much better than U.S./Europe (non-BCG countries) despite India’s fragile healthcare system and huge population. In India, no one is sure about COVID R-rate and there is no pro-active testing/tracing.

Also, the Indian government allowed unlocking in such a way that helps control the spread of natural mild infections and speedy recovery (almost like artificial vaccinations). This has most probably helped in achieving natural herd immunity, at least partially. As per various serological tests, almost 50-60% of the Indian population may have already infected with COVID and recovered. Thus, along with COVID vaccinations and natural infections, India may be able to eliminate COVID-19 by 2023 fully, which is a significant achievement, considering India’s huge population, limited supply of vaccines, and limited resources. 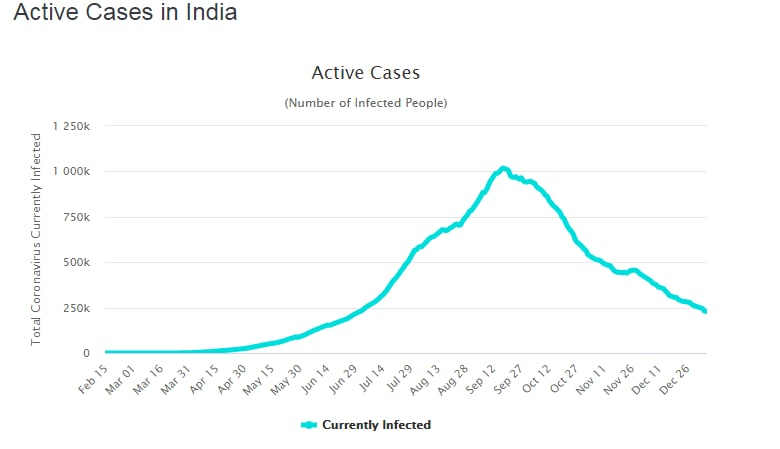 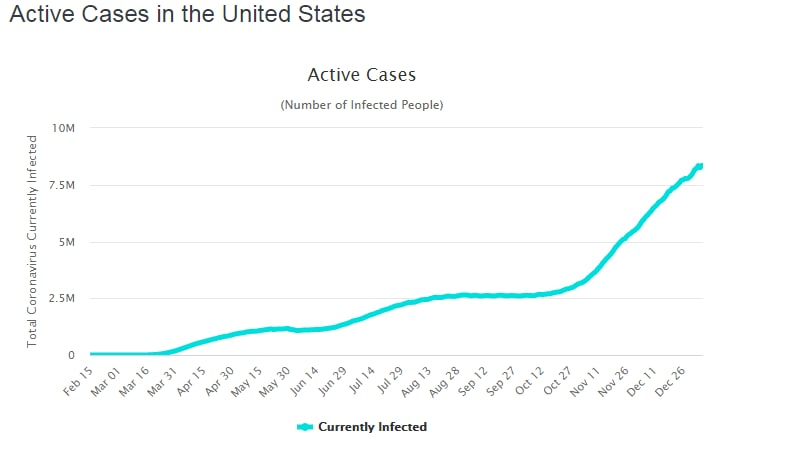 There is a stark contrast between India and U.S. COVID trajectory

Apart from COVID, FPIs are scrambling for Indian equities as the rate of return is quite high from not only developed markets but also from various EMs. Also, quality & quantity is quite remarkable for Indian equities, especially for blue-chip companies. This, along with India’s appeal for 5D (democracy, demography, demand, deregulation, and digitalization) and the Modi mantra of reform, perform, and transform, FPIS had poured almost $20B in 2020, which is the main reason for India’s outperformance.

Looking ahead, apart from local cues, all focus will be also on global cues, especially the outcome of two Georgia Senate seat elections (U.S.). As per the preliminary trend, Democrats are leading and may be able to win both seats, which will eventually allow Biden to control Senate and it will be a trifecta, albeit with a razor-thin margin. Under such a scenario, risk assets may be boosted by the prospect of CARES Act 3.0, less hawkish trade/cold war policies on China/EU. But at the same time, the market may be also concerned about Biden’s election agenda/some socialistic policies like a higher tax on super-riches and corporates.

As the Biden majority is wafer-thin, he may prefer bipartisan agreement in all major policy matters to balance everything between COVID reliefs, fiscal prudence, re-regulations, and employment. Thus, apart from limited CARES Act 3.0 and a bipartisan infra stimulus (including green stimulus), there may not be any major policy change by Biden in the foreseeable future (like tax hikes, ban of oil fracking). Biden may not take any pre-emptive steps like corporate tax hikes in the midst of a pandemic, at least till 2024, the next U.S. election.

But, Biden has to clarify his policies (Bidenomics) clearly; otherwise, risk assets may correct to some extent. Also, Trump’s consistent effort to undermine the November election result and his policy of 11th-hour chaos may affect the risk assets to some extent till at least 20th January, his scheduled exit day from the White House. Trump is now almost desperate to teach a last-minute lesson to China and Iran. Trump banned various Chinese payment gateway companies (payment bank) and also delisting various Chinese telecom companies for the sake of ‘national security’. In his first few weeks, Biden has to do a lot in reversing Trump’s bellicose policies, especially on China, Iran, and many others.

Technically, whatever may be the narrative, Nifty Future now needs to sustain over 14225-14275 zones for the next leg of the rally; otherwise, it may correct to 13800 areas. For Bank Nifty Future, the breakouts levels are now around 31600-31800, while positional support around 28800 levels.