India’s benchmark stock index Nifty closed around 16663.00 Tuesday, slumped -1.23%, and snaps a 5-day winning streak on negative global cues amid hopes & hypes of an imminent truce between Russia-Ukraine, partial lockdowns in China (Omicron spikes), and the possibility of any harsh U.S. sanctions on China over its dealing with Russia, undermining U.S. hegemony! Dow , as well as Nifty Future , stumbled early European session as Europe slapped 4th wave of economic sanctions on Russia as there is no serious diplomatic effort by Putin for a ceasefire with Ukraine.

Russia's intensifying war on Ukraine added to broader market concerns, with reports of explosions in and around the capital Kyiv following an overnight attack on a TV tower in the country's northern region. U.S. officials remain concerned Kremlin is seeking financial and military assistance from China, while the UK has warned that Russia may be contemplating the use of chemical weapons in the weeks ahead. The U.S. said Russia seeks ultra-modern combat war drones from China to fight Ukraine, while China vehemently denied the allegation.

THE CHINESE EMBASSY IN LONDON SAID:

There will be protracted uncertainty in the coming days despite some progress in peace talks between Russia and Ukraine. Moreover, if China directly or indirectly supports Russia for Ukraine's fight and economic sanctions highlighting U.S./Western hegemony, then it may take more complex and serious geopolitical risks.

U.S./NATO/Europe may not allow Zelensky to make a deal with Putin which may favor Russia. Putin is now also looking for a face-saving exit from Ukraine. But his core demand is to ensure no NATO expansion in Ukraine and Georgia coupled with the withdrawal of NATO memberships from erstwhile Soviet states. Putin also wants official recognition of Donbass states and a guarantee that Ukraine/NATO will never re-claim annexed Crimea.

On the other side, Zelensky is demanding a complete cease-fire agreement before going for any meaningful deal with Putin. Zelensky virtually said Ukraine is now not pursuing actively its NATO membership. And Zelensky is also open for a referendum in the Donbas region, whether they prefer to stay within Ukraine with greater autonomy or exit the country completely. Although Zelensky virtually agreed due to the sheer size of the Russian military, Ukraine may eventually acknowledge defeat, but Ukraine will continue to fight till then.

Overall, India’s Dalal Street outperformed America’s Wall Street in the last few days despite lingering uncertainty over the Russia-Ukraine war as India may be least affected over Western sanctions on Russia. India imports only around 3% of its oil requirement from Russia. And at the same time, India is also getting Russian heavy oil with a heavy discount to the tune of almost $30 from the global market price. India is also exploring paying Russian exports in INR rather than USD to bypass U.S. sanctions.

Also, the global price of oil tumbled from around $130 to below $100 in the last few days, while the Indian government refrained from any abrupt price hike of domestic petrol and diesel prices. There was speculation that Modi admin may hike petrol and diesel prices by around INR 20 soon after state elections. But so far such a price hike has not happened and Indian inflation is not expected to jump abruptly because of any abrupt hike in petrol and diesel (transportation fuel). But Indian inflation is also expected to be elevated because of substantial price hikes for other commodities like sunflower oil seeds and various metals after the Russia-Ukraine war and subsequent supply chain disruptions.

Talking about inflation, India’s headline CPI, as well as core CPI, continues sticky/elevated around 6%, at RBI’s upper band of tolerance level and much above 4% target. 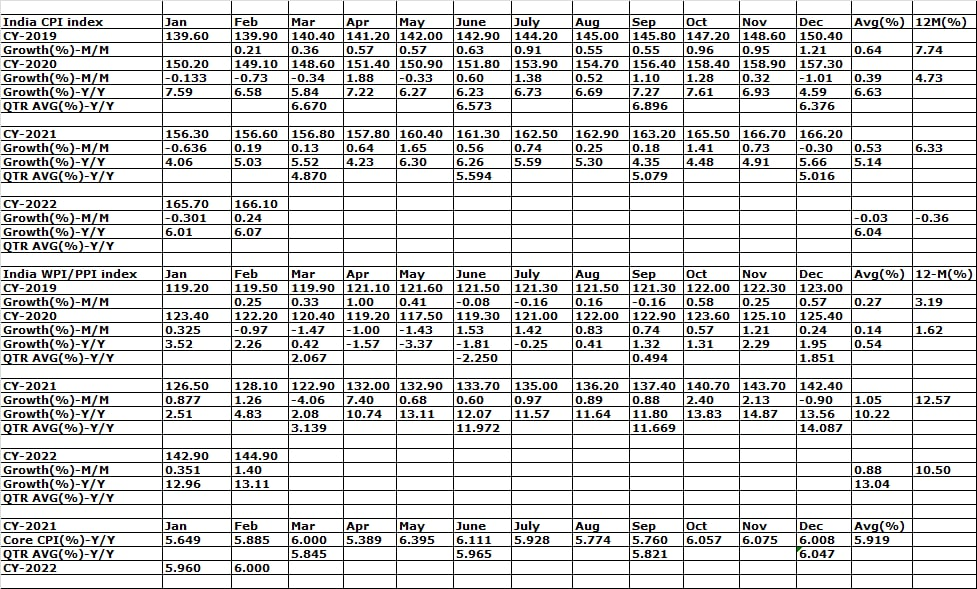 The Q3FY22 real GDP growth comes around +5.4% against +8.5% in Q2FY22. The Indian unemployment rate was around 8.10% in February against 6.57% in January. The Indian economy was already in a stagflation-like scenario even before COVID. 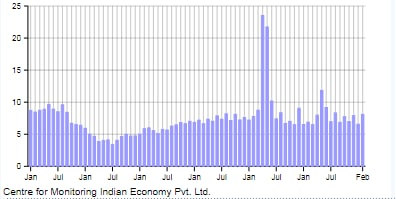 Prolonged elevated commodities and oil & gas may invite global stagflation and the next wave of global recession/financial crisis. Thus Wall Street, as well as Dalal Street, plunged. Also, a lethal combination of elevated oil and USDINR will boost imported inflation, which will eventually affect core inflation and discretionary (non-essential) consumer spending, negative for economic growth and corporate earnings. This will result in a stagflation-like scenario (lower economic growth/GDP, higher inflation, and higher unemployment) in India too.

Prolonged Russian-Ukraine tensions and global sanctions will also cause supply chain disruption for several commodities (metals) and agricultural grains. Higher crude oil prices are negative for paints companies and many downstream industries. India is an import-oriented country, especially for oil and various metals/commodities.

If Russian risk continues and the Ukraine war dragged further, this may result in oil well over $120 along with higher USD and commodities, and it will be negative for the Indian economy, resulting in higher imported inflation. Apart from inflation, Indian export and import (external trade) may also hurt along with FDI.

But India is now enjoying a scarcity premium among EM space on the appeal of political, policy, and macro stability. This coupled with strong political leadership (by PM, Modi), the mantra of reform & performance, and the attraction of 5D (democracy, demography, demand, deregulation, and digitalization), India is now an attractive destination for both FDI and FPIs. Thus any unusual volatility may be also a great opportunity to invest in Indian blue chips having a good business model, strong balance sheet, and credible management.

On late Tuesday, India-50 (SGX Nifty) future was trading around 16900, in positive tome as Dow Jones Futures also recovered on hopes of an imminent ceasefire between Russia and Ukraine as both are being engaged in ongoing negotiations.

But Russian President Putin said: “Kyiv is not serious about finding a mutually acceptable settlement.”