Overall, Nifty soared +2.48% for the truncated week and made a new lifetime high of 18350.75 as the pandemic now virtually turned into an endemic. Indian organized retail sales recovered almost 97% of pre-COVID levels in September and are expected to cross the same by October. In Q2 and Q3FY22, the real GDP should also recover to pre-COVID levels. Nifty was also boosted by upbeat IMF commentary about Indian economic growth prospects and an assurance by the Indian FM Sitharaman that there would be no power crisis as there are adequate coal stocks to run thermal power plants, contrary to the earlier perception of a doomsday scenario. 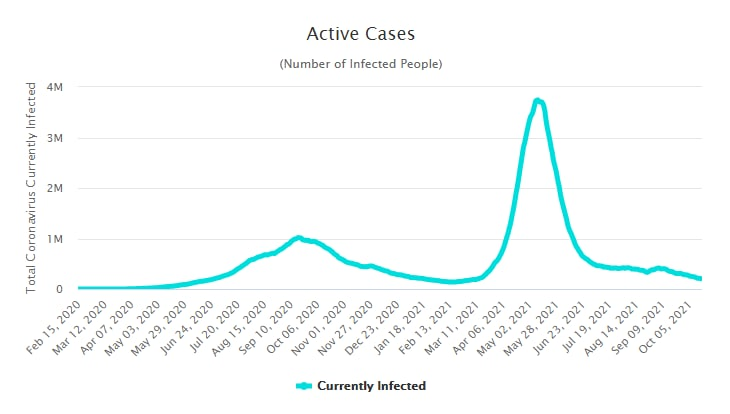 On Thursday, the Indian market was also buoyed by signs of inflation easing as the Indian annual wholesale price inflation (WPI) rate fell to a six-month low of +10.66% in September from +11.39% recorded in August, below market expectations of +11.1%. The WPI, which is equivalent to PPI, was dragged by fuel & power, primary articles, manufactured products, basic metals and food items. The core WPI was at +11.1% in September, against market expectations +11.3% and +11.2% recorded in August (y/y/).

Overall at a glance, India’s CPI index is now increasing +0.49% sequentially (m/m) in CY2021 against WPI/PPI rate +0.83%, indicating a lack of pricing power by the producer to consumers, contrary to earlier years. If this trend persists, we may see a subdued bottom line for non-financial consumer-facing companies.

The Indian market was also boosted by upbeat commentary about economic recovery by IMF, which projected real GDP growth for FY: 21-22 at +9.5% and +8.5% against China’s +8.0% and +5.6% (CY:21-22); i.e. India may grow faster than China. The IMF chief economist Gopinath said that to maintain steady growth, India will have to keep up the vaccination rate, adding that public infra investment will propel economic recovery, while inflation and unemployment were key factors which the government will have to closely monitor. Gopinath also spoke in favor of greater fiscal support in near terms for households and health sectors and reducing the cost of borrowing while keeping the fiscal deficit in check.But IMF also said India’s economic outlook remains clouded due to pandemic-related uncertainties contributing to both downside and upside risks.

Manufacturing and services sectors have shown improvement after the crushing second wave of the Coronavirus pandemic subsided but the area of focus would be public infrastructure investment, as it is from there that growth is going to come from---India will have to keep an eye on the coal sector, rising oil prices, and inflation. Secondly, India has to vaccinate to counter the pandemic. Keep confidence high, inflation is important as core inflation is high in India and this needs to be looked into. At the same time, on close observation, it can be noted that while listed companies have recovered, it is the micro, small, and medium enterprises that have been hit hard by the pandemic.

Looking at the fact that many people have not been able to return to work, employment is still a distance to be travelled. People are still using rural employment insurance money to survive and this is the real indicator of growth. These are uncertain times; the financial sector risk and the infection risk are always there, so attention will have to be paid to such indicators. The high rate of vaccination has kept India's growth upbeat and the fact that a large section of the population has got at least one dose, has helped. Air India's divestment shows commitment to the privatization agenda and a big step forward.

We have the growth numbers. With such a large population, you already have your 50% vaccinated which gives you confidence, but the risk of third-wave remains. The good news is, after the second wave, there is a rise in manufacturing. The one area where growth would come from - public investment in infrastructure---We do believe that there should be an improvement in fiscal support in India that is being provided. The target was to get 40% of the population of every country vaccinated by the end of this year. And a lot of countries haven't achieved that. That's a worry. The focus should be on that. In light of this fact, India can play an active role in exporting vaccines to such nations----

In U.S. Gopinath said: We saw consumption flattening in the US, that's one of the factors for downgrading US's growth. The main factor driving that is the delta variant - which stopped the momentum and disruption in supplies. In the US, there is vaccine hesitancy. Everybody knows that we need a much higher vaccination rate.

On China's downgrade, Gopinath said: The property regulation was a driving factor. We already had a downgrade earlier this year. But again there are significant risks here.

Meanwhile, on Friday, the Indian FM Sitharaman assured the IMF that the Indian government remains committed to bring the economy on the path of fiscal consolidation in the near-to-medium term, setting the target to reduce fiscal deficit to 4.5% by FY26 from 6.8% of GDP budgeted for the current fiscal (FY22). Sitharaman also assured that the Indian government will provide additional capital to public sector banks (PSBs) as and when needed. The Indian FM (Finance Minister) also urged the IMF to help low-income countries to use their special drawing rights (SDRs) effectively to overcome the impact of COVID.

The Union government fiscal deficit is budgeted at 6.8% of GDP in the current year and it will be reduced to 4.5% of GDP by 2025-26. Next year's budget will contain medium-term macroeconomic projections and will include revised Fiscal Responsibility and Budget Management Act (FRBM)---Revenue mobilization would be a key element of medium-term fiscal strategy. Streamlining with e-invoicing, Goods and Services Tax (GST) audits, closer scrutiny of returns and rate rationalization are all expected to augment GST revenues; rationalized corporate income tax rates are also expected to improve tax compliance and tax buoyancy---Disinvestment with a focus on privatization and monetization of sovereign assets would also support the consolidation process—

The thrust on capital expenditure in infrastructure, including projects on health, education, and skill development will continue. Enhanced public investment in infrastructure is expected to crowd in private investment and raise potential output and medium-term growth--the stress tests are undertaken by the Reserve Bank of India (RBI) revealed that scheduled commercial banks would have sufficient capital even under a severe stress scenario. Moreover, the government is ready to provide additional capital to Public Sector Banks as and when needed—

The RBI has continued to maintain an accommodative stance with cuts in the repo rate, liquidity measures amounting to 8.7 percent of GDP and has taken more than 100 measures since the onset of the COVID-19 pandemic to support specific sectors, institutions, instruments and ensured congenial financial conditions for supporting the reinvigoration of growth--RBI has also indicated that they would continue their accommodative monetary policy stance as long as necessary to revive and sustain growth on a durable basis while ensuring that inflation remains within the target---Aggregate demand is gaining firmer ground, while on the supply side indicators mirror improvement in industrial activity and services sector indicators point towards sustained recovery.

As the early indications emanating from high-frequency indicators suggest, India is well on track to achieve these growth projections and to emerge as the fastest-growing major economy in 2021-2022 and beyond. The trajectory of inflation is also shifting down more favorable than anticipated---As pandemic scars heal and supply conditions are restored with productivity gains, a sustained easing of core inflation can be expected, which will reinforce the growth-supportive stance of monetary policy--.

Talking about unemployment, the recent CMIE data shows that India’s unemployment rate dropped to 6.90% in September from 8.30% in August and below pre-COVID levels (Jan’20) of 7.20% and at par with Jan’19, mainly due to a surge in rural jobs (transportation infra and manufacturing boost) and a shift from consumer-facing/contact-sensitive service industry to construction and manufacturing sector. Most of the jobs added are of low-wage type; not quality job creation for urban youth/educated people.

As the Indian economy made substantial further progress on maximum employment or has achieved maximum employment status and inflation already running much above 4% target consistently, RBI may also follow Fed and begun the normalization/tightening process to control inflation. Thus RBI has signaled a hike in reverse repo rate in Dec’21 meeting followed by QE/GSAP tapering.

Technically, whatever may be the narrative, Nifty 50 Futures now has to sustain over 18555-675 areas for a further rally to 19625-20000 zones; otherwise, it may correct to 17950-675 areas. Looking ahead, growing tension at Pak and China LOC/LAC coupled with talks of ‘Surgical Strike’ (on Pak) ahead of UP/other big state election early 2022 may be a risk factor, while India’s EM scarcity premium and the appeal of 5D (democracy, demography, demand, deregulation and digitalization) may be a wonderful opportunity to invest in blue-chip names under any volatility. Nifty may scale 20K by Dec’21-Mar’22 even after some healthy correction/consolidation.