The combination of broad market risk-aversion and widespread concerns that stay-at-home stocks may have peaked has been taking a hefty toll on Netflix (NASDAQ: NFLX ) shares.

So far, the Los Gatos, California-based entertainment behemoth has seen its market-cap drop more than 40% year-to-date, making it the second-worst performer in the NASDAQ 100 Index. Since reaching a record high of $700.99 on Nov. 17, the stock has fallen about 45%, closing Tuesday at $386.7. 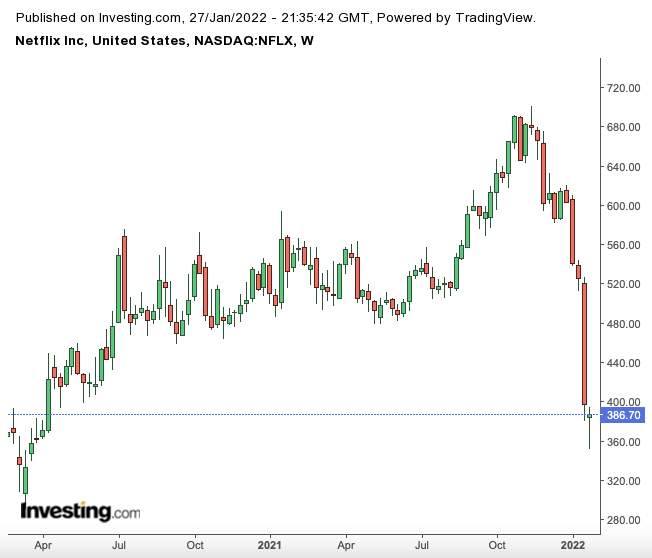 Netflix’s plunge accelerated after the company released its latest earnings report last week, showing that subscriber growth isn’t coming back as quickly as analysts had anticipated. Compared with four million a year earlier, the company now expects to add just 2.5 million subscribers in the current quarter.

It also slightly missed its subscriber estimate for the fourth quarter, adding 8.3 million subscribers instead of the projected 8.5 million.

However, we believe that this drastic correction offers a great entry point for investors interested in buying the best streaming entertainment stock available at a much lower price.

Post-earnings weakness isn’t something new for Netflix investors. According to Bloomberg data, shares have advanced on the day after earnings just twice out of the past 12 quarters, excluding the most recent quarter.

But Netflix has often recovered strongly from the slump, helped by its superior content and technology. Savvy investors are already moving their cash to take advantage of this massive downside move.

“I have long admired Reed Hastings and the remarkable company he and his team have built. We are delighted that the market has presented us with this opportunity.”

What makes Netflix a good buy-on-the-dip candidate is its growing slate of original content. Netflix spent about $17 billion on original content last year, a 40% jump from the previous year.

For the current quarter, Netflix has a strong content lineup of movies and TV shows, including new seasons of The Witcher, You, Bridgerton, one of its biggest hits, and The Adam Project, a much anticipated time-travel-themed movie starring Ryan Reynolds and Jennifer Garner.

Another positive development that long-term investors should consider is that Netflix isn’t dependent on debt to fuel its growth. After years of borrowing to fund production, the company said it no longer needs to raise outside financing to support day-to-day operations.

Netflix stock has become an attractive buy after its latest slump, which, in our view, is overdone. After solidifying its cash and competitive positions during the pandemic boom, the company is better positioned to return to growth.