They’re coming: The big storage draws of 2021/22 that natural gas longs have longed for.

After the adrenaline-charged triple-digit storage draw report in Christmas week, gas bulls were repelled by the mere 31 billion cubic feet (bcf) of consumption reported by the US Energy Information Administration for the final week of last year.

Call it a humbug, but that year-end report was just a precursor to the outsized number the EIA is expected to report for gas usage in the first week of January. In its 10:30 AM Eastern US (15:30 GMT) release today, the agency is tipped to report a draw as large as 173 bcf for the week ended Jan. 7, according to a poll of forecasters tracked by Investing.com.

“Recent weather model runs have gone all-in on the cold shot into the eastern half of the US late this month and even suggest the coldest temperatures … until the very end of the foreseeable forecast,” Dan Myers, analyst at Houston-based gas markets consultancy Gelber & Associates, said in a note to the firm’s clients on Wednesday seen by Investing.com.

Positive temperature anomalies were experienced along the entire Eastern US seaboard in recent weeks, leading to decreased gas demand for heating.

But with the weather pointing to freezing temperatures in the coming weeks, longs in the market have been energized by the prospects of storage draws and have chased up gas prices on New York’s Henry Hub as a result.

On Wednesday alone, the front-month contract on the exchange jumped 14% after rising a cumulative 11% over three earlier sessions. At $4.78 per thermal unit, US gas futures are already showing a 28% gain since the start of the year.

“Coming forecasts suggest that 200+ bcf draws will be in reach for the next several storage reports,” Myers wrote in his note.

“With (the) price move riding completely on this expectation, additional significant price fluctuations can be expected in coming days as traders grapple with much uncertainty late in the period.”

“The idea that withdrawals will ramp up so steadily through relentless and uninterrupted cold the remainder of January may well warrant skepticism. Nonetheless, speculators are simply absorbing the weather forecasts put in front of them, and the current outlook is indeed one of notable, stronger-than-normal demand over a sustained period.” 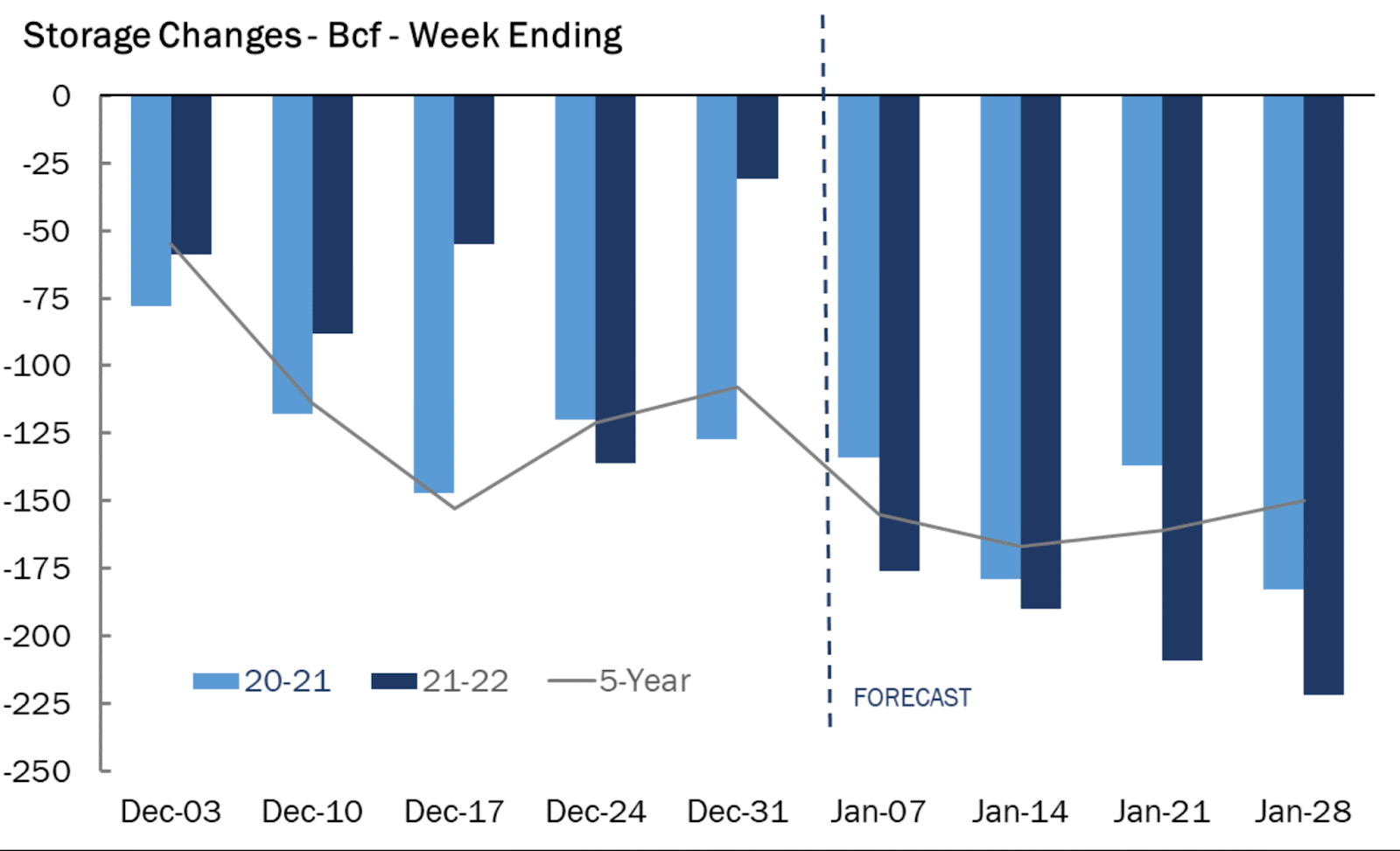 If forecasters are on target with their call for a 173-bcf draw for the week ended Jan. 7, gas remaining in storage would be reduced to 3.022 trillion cubic feet. That would be 6% lower from the same week of a year ago, when the weekly drawdown from storage then was 134 bcf. But if compared to the five-year storage average between 2017 and 2021, the stockpile would still be 2.6% higher as the weekly draw then was also substantial at 155 bcf.

According to data compiled by Refinitiv, temperatures last week were colder than usual with 214 heating degree days (HDDs), compared with a 30-year normal of 191 HDDs for the period.

HDDs are used to estimate demand to heat homes and businesses and measure the number of degrees a day's average temperature is below 65 degrees Fahrenheit (18 degrees Celsius).

While production estimates climbed back up to 94 bcf on Wednesday from 92 bcf to start the week, output still remained about 2 bcf below late-2021 highs following freeze-offs early this year that curtailed producer activity.

Breaking down weather forecasts in the near-term, naturalgasintel.com said predictions called for the coldest weather of winter, on a national level, to permeate the Lower US 48 States over the final 10 days of this month.

Forecasts showed the “strongest demand so far this winter season” during that stretch, NatGasWeather said.

“Frigid Arctic air over Canada will advance aggressively into the US late next week into the following week,” ushering in exceptional cold over a majority of the country, the portal quoted forecaster NatGasWeather as saying. Some areas could endure bouts of lows more than 20 degrees below zero, and freezing conditions could push as far south as Texas, NatGasWeather said.

“Both major weather models now forecast widespread lows of -20s to 20s over the northern two-thirds of the US” beginning Jan. 21, it added.

Naturalgasintel.com also estimated that liquefied natural gas flows at US LNG production facilities reached a record daily 13 bcf for only the second time this week, reflecting increased capacity and robust demand from Europe.

American supplies of the super-chilled fuel have provided some stability to Europe, Rystad Energy senior analyst Emily McClain told naturalgasintel.com. However, “geopolitical tensions between Russia and Ukraine are an ever-present storm cloud,” she said, “a factor that may set the scene for continued weak flows from Russia to Western Europe throughout the first half of the year.”

Europe is wrestling with a severe supply crunch following a prolonged period of exceptional demand in 2021. Anticipated flows of extra gas via pipeline from Russia were expected to ease the continent’s troubles ahead of winter. But political turmoil between Russia and Ukraine resulted in a 25% drop in Russian gas supplied to Europe during the final three months of 2021, according to the International Energy Agency. That left Europe starved for gas and clamoring for US shipments of LNG.

The crisis could propel robust demand for US LNG exports through the winter and beyond to build supplies.