Regional market dynamics and regional generational capacities decide how much is allocated to each energy source that makes up the power that’s generated in the United States each week.

The US fuel mix for electricity generation presents a bird’s eye view of the interplay that occurs between the different fuels nationally. The narrative is that natural gas has remained America’s top fuel for this in October, providing anywhere between 35% and 40% of generation for each week.

Indications are that the fuel mix will not change much either, going forward. 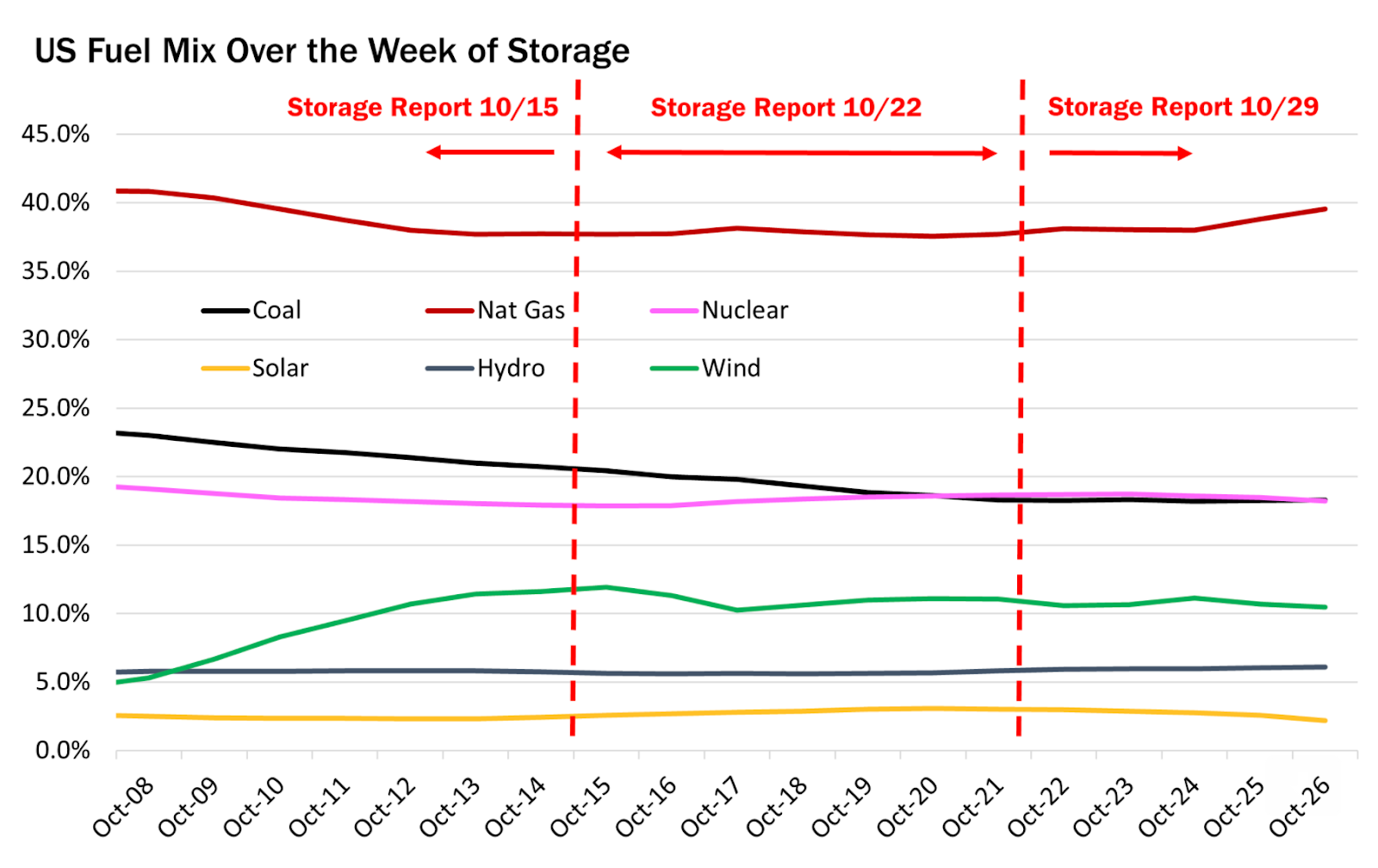 This is despite concerns that there’ll be inadequate supply of gas for both power and heating purposes during the peak of the coming winter in the United States. 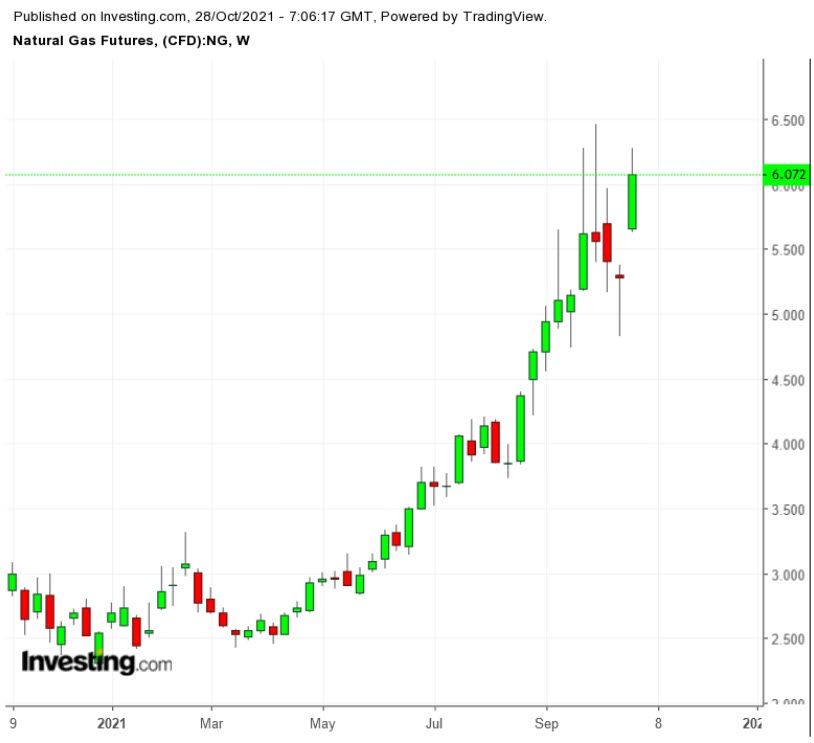 There are also growing fears by the day that gas prices will be too high by the winter—they are already up almost 140% on the year, trading at just above $6 per mmBtu, or million British thermal units now, with forecasts for $7 pricing by January/February.

This has spawned speculation that coal—which has rallied as much as natural gas this year but remains relatively cheaper—could cannibalize a significant portion of the gas allocation for power generation if utilities could lay their hands on adequate supplies of the energy sources during crunch time.

A slide of the US fuel mix made available to Investing.com on Thursday by Houston-based energy consultancy Gelber & Associates shows coal’s share of the US fuel mix for generation was less than 25% at its peak this month, with a descending scale to around 20%.

“Declining total power generation during this week saw energy generators opt to decrease generation from coal and wind plants as opposed to natural gas—as a result, natural gas’s percentage in the fuel mix has remained relatively consistent through the week of storage,” Dan Myers, Gelber’s associate said in an email to the firm’s clients, shared with Investing.com.

Myers said an early study of next week’s storage levels for natural gas suggests that the natural gas share of generation was set to increase to above 40%. He said this “lines up perfectly with prices” of gas, which had been volatile lately, swinging from a low of $4.825 mmBtu this week to a peak of $6.280. Myers added:

“Ultimately, reliance on gas during this week’s storage indicates that gains from higher production and lower export demand have the potential to be offset by higher gas demand.” 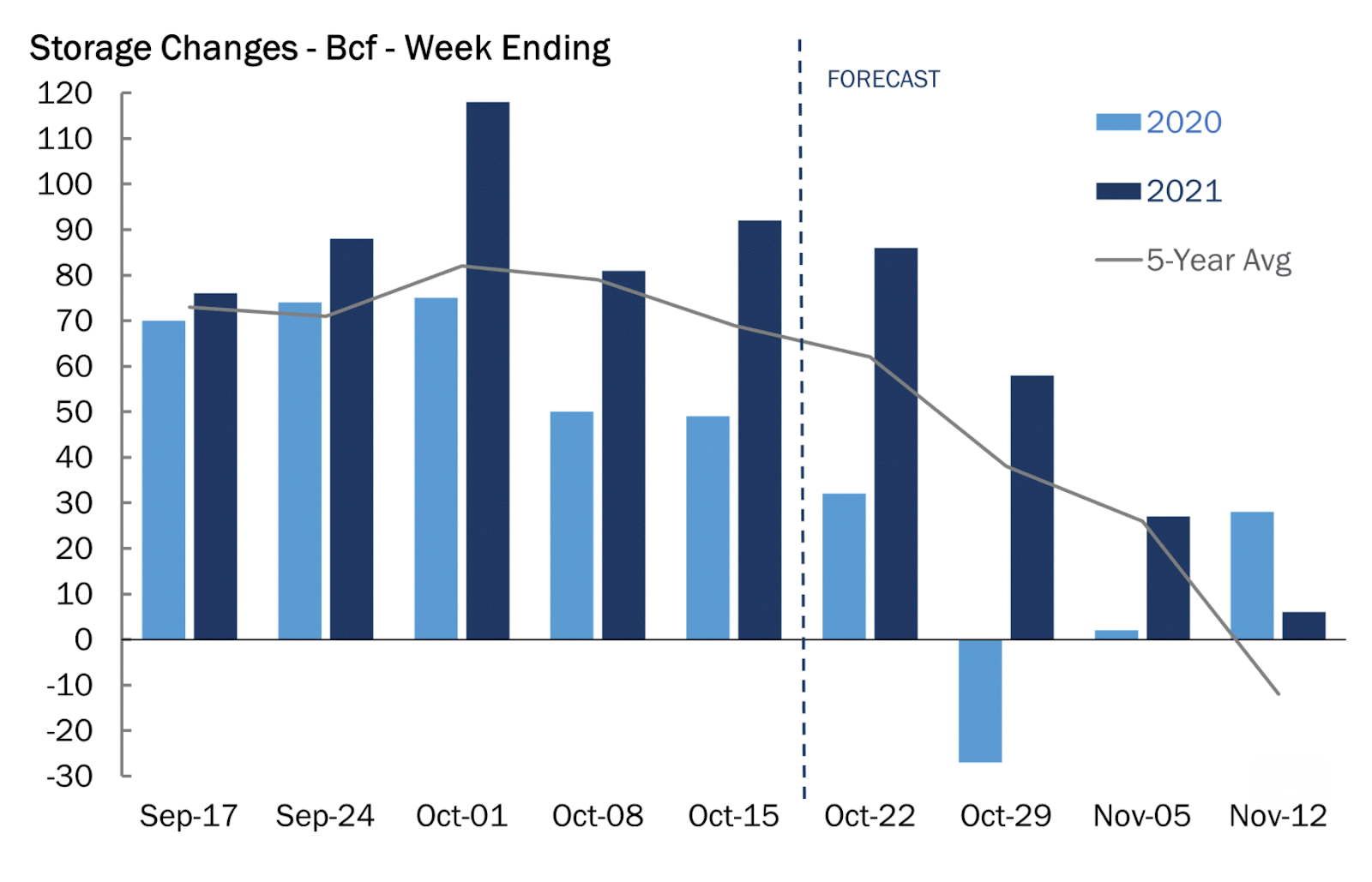 The Gelber fuel mix study comes just ahead of the weekly update on gas storage due from the EIA, or Energy Information Administration, at 10:30 AM ET (14:30 GMT) today.

Myers’ consultancy is predicting that the EIA will report that utilities in the country injected 87 bcf, or billion cubic feet, into storage for the week ended Oct. 22. That is just a notch above the 86 bcf average estimated by analysts tracked by Investing.com.

In the prior week to Oct. 15, utilities injected 92 bcf of gas into storage, which was the sixth week in a row that utilities stockpiled more gas than usual.

If analysts are on target with their call for an 86-bcf injection, that would take inventories to 3.547 tcf, or trillion cubic feet. That would still be some 3.5% below the five-year average and 10.2% below the same week a year ago.

Analysts are betting that last week’s storage injections surpassed annual and five-year norms due to milder-than-normal weather with 60 TDDs, or total degree days, compared with a 30-year average of 78 TDDs for the period. TDDs, used to estimate demand to heat or cool homes and businesses, measure the number of degrees a day's average temperature is below or above 65 degrees Fahrenheit (18 degrees Celsius).

NatGasWeather, in a forecast carried by naturalgasintel.com, said the closely-followed Global Forecast System trended a little chillier overnight for next week and then continued to add demand in the midday run.

This pushes the Nov. 1-7 outlook toward the bullish side, according to the forecaster, as lows of teens to 30s Fahrenheit were set to increase in coverage over the northern United States and down the Plains.

“The pattern Nov. 8-11 still favors national demand easing to lighter levels,” NatGasWeather said. “However, as we’ve been mentioning, the theme going back to last week has been for seemingly bearish/mild days in the 12- to 15-day period to add demand as they roll into forecast days 6-11.”

This could continue to occur as the upper pattern favors ways in which colder Canadian air can sneakily slide into the Midwest and interior Northeast for the Nov. 8-12 period.

The forecaster also noted that there would be stronger cold shots into Europe in the coming couple of weeks, resulting in a drawdown of storage that already is precariously light ahead of winter.

Rystad Energy, also cited by naturalgasintel.com, noted that even with milder-than-normal temperatures over the past week, storage levels in Europe had started to decline. Analysts at the firm noted a 0.5% drop week/week in inventories. Rystad senior analyst Wei Xiong said:

Meanwhile, further price support is provided by a forecast of temperatures dropping close to normal across Northwest Europe in the coming weeks. Xiong noted that this is a revision from prior expectations of above-normal temperatures in that time frame. However, she said the upside risk is balanced by the recent decline in coal prices that may trigger additional gas-to-coal switching on the Continent.