Is natural gas poised to return to the $9 highs of two weeks ago?

The trend of weather strengthening demand expectations in recent days has carried prices back into the top end of the range, where they carved out new 14-year highs earlier this month.

However, the broader picture is a bit more balanced. 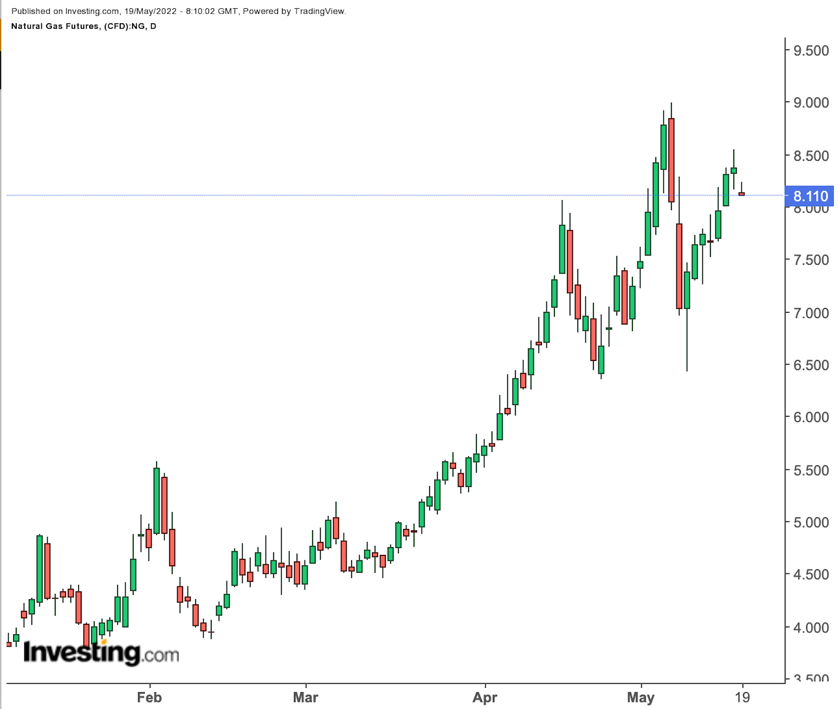 Continued warmth in the coming weeks has only served to bolster a period of otherwise weak demand—known as the “shoulder season” that comes ahead of full-blown summer heat—and prevent a string of notably bearish injections into US natural gas storage.

In Wednesday’s session, gas futures on New York’s Henry Hub flip-flopped on both sides as traders weighed the implications of upcoming weather shifts. In the end, the market settled slightly higher, retaining its upward trajectory by rising for a third day in a row.

Some, however, say the market appears to be at an inflection point and a sharp move, either way, could come soon depending on weather turns, their impact on gas burns for cooling and power generation, and the consequent weekly storage builds.

Until two weeks ago, bets were accumulating that the rally on the Henry Hub wouldn’t stop until it reached $10. Many bulls are still expecting 2008 highs of more than $13 by this summer when temperatures spike, forcing Americans to turn their air-conditioners on to max. Any untoward demand for liquefied natural gas from Europe at that time could exacerbate the rally.

Yet, near-term volatility appears to be a bigger worry now. While gas futures are up 13% for May, extending back-to-back gains of 28% in April and March, they could still reverse if there’s a near-term improvement in storage.

“The latecomers got just another wild card entry for the bigger wave that gains affirmation once prices break above and settle for weekly and monthly time frames above $9,” said Sunil Kumar Dixit, chief technical strategist at skcharting.com.

“With this coming true, the next big wave is expected to have a calculated target range of $11 and extend to $13 in a broader sphere. Occasionally, some correctional swings are not ruled out, which will remain valid as entry for those who have long-term vision.”

Dixit, however, cautioned that Henry Hub’s daily and weekly ranges will continue to be volatile:

“A more decisive signal will be required to either send the market pushing for new highs or plummeting back to the $6.50-lows it tested early last week,” the analysts at Gelber said in an email to their clients on Wednesday, seen by Investing.com.

The Gelber note landed ahead of the US Energy Information Administration’s update on gas storage numbers for the week ended May 13. 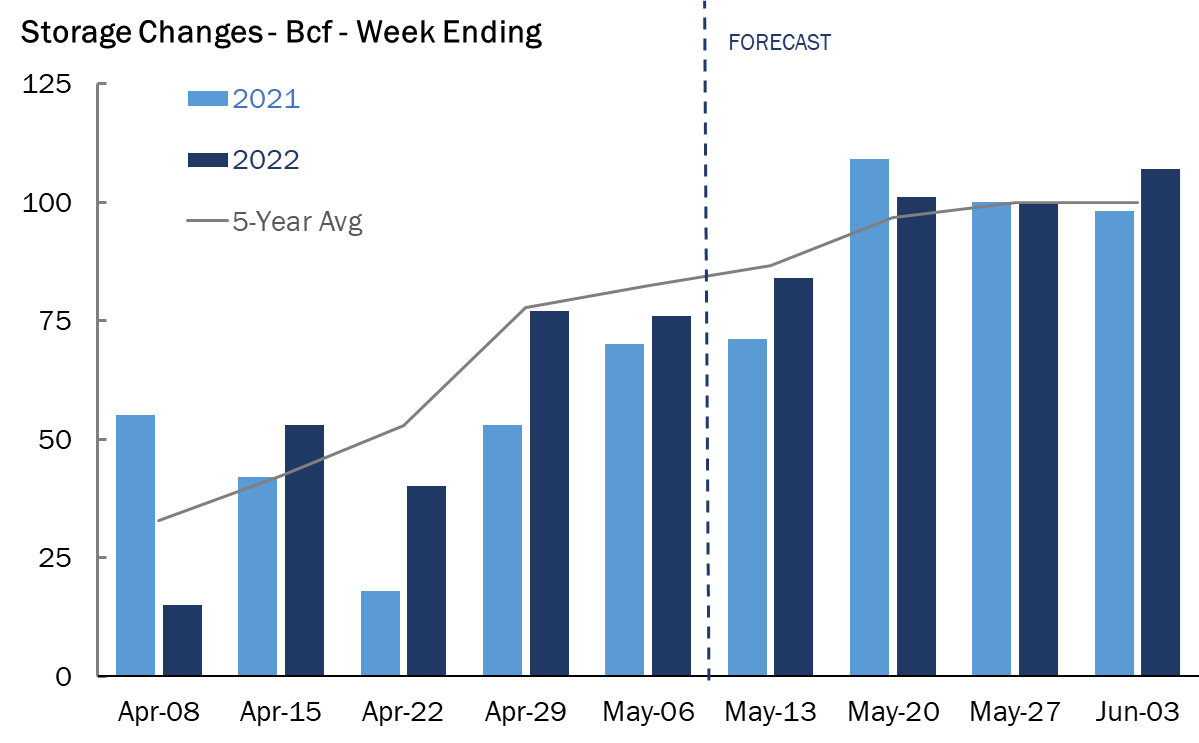 According to a consensus of analysts tracked by Investing.com, US utilities likely added a near-normal 87 billion cubic feet (bcf) of natural gas to storage last week.

In the prior week to May 6, utilities added 76 bcf of gas to storage.

The injection analysts forecast for the week ended May 13 would lift stockpiles to 1.730 trillion cubic feet (tcf), about 15.3% below the five-year average and 17.2% below the same week a year ago.

Gelber’s analysts said they were looking further beyond, at storage due in coming weeks.

“Although this week’s expectation for an injection of 84 Bcf is just on the low side of the five-year average, the following three weeks are still projected to match average storage increases for this time of 100 Bcf or above,” the analysts said.

“With little change to the storage deficit expected late this month, the market is now left to contemplate the ~300 bcf lower inventory level that  sent prices rallying this spring in the first place.”

According to Reuters-associated data provider Refinitiv, there were 72 “total degree days” (TDDs) last week compared with a 30-year normal of 64 TDDs for the period.

TDDs, used to estimate demand to heat or cool homes and businesses, measure the number of degrees a day's average temperature is below or above 65 degrees Fahrenheit (18 degrees Celsius).

Weather forecaster NatGasWeather said Wednesday its latest readings showed “a rather hot US pattern attempting to gain ground over the southern and eastern” expanses of the country in coming days.

“Texas and surrounding states will remain hotter than normal the next several days with highs holding in the 90s to lower 100s for strong early season cooling demand,” NatGasWeather said in comments carried by naturalgasintel.com.

Such conditions would follow a similar bout of heat in the southern reaches of the country last week. That, combined with “woefully underperforming” production, could impact the storage injection for the week ended May 13, NatGasWeather said, potentially adding to already simmering supply worries.

While utilities have begun to inject more gas into underground storage for use next winter, supplies remain notably light relative to historic norms. Demand proved strong in the second half of last winter, depleting inventories.