When most people think of social media, Facebook, whose company was recently rechristened Meta Platforms (NASDAQ: FB ) comes to mind. Facebook has been around for 18 years. Those who bought FB shares when it went public in May 2012 paid $42.05 and watched the stock more than halve in value after the IPO, dropping to a low of $17.55 in September 2012.

Facebook became a go-to platform for users, but the brilliance of the business has been its ability to monetize via advertisers. FB’s access to data makes it one of the most valuable technology companies worldwide. Meanwhile, that position also creates more than a few regulatory and privacy issues.

As we head into 2022, Facebook has embraced the metaverse as its next significant project. The company went as far as changing its name to reflect the new focus to become a leader in the network of 3D virtual worlds it believes is the future of social connection.

From a long-term perspective, FB shares remain in a bullish trend in late January 2022. 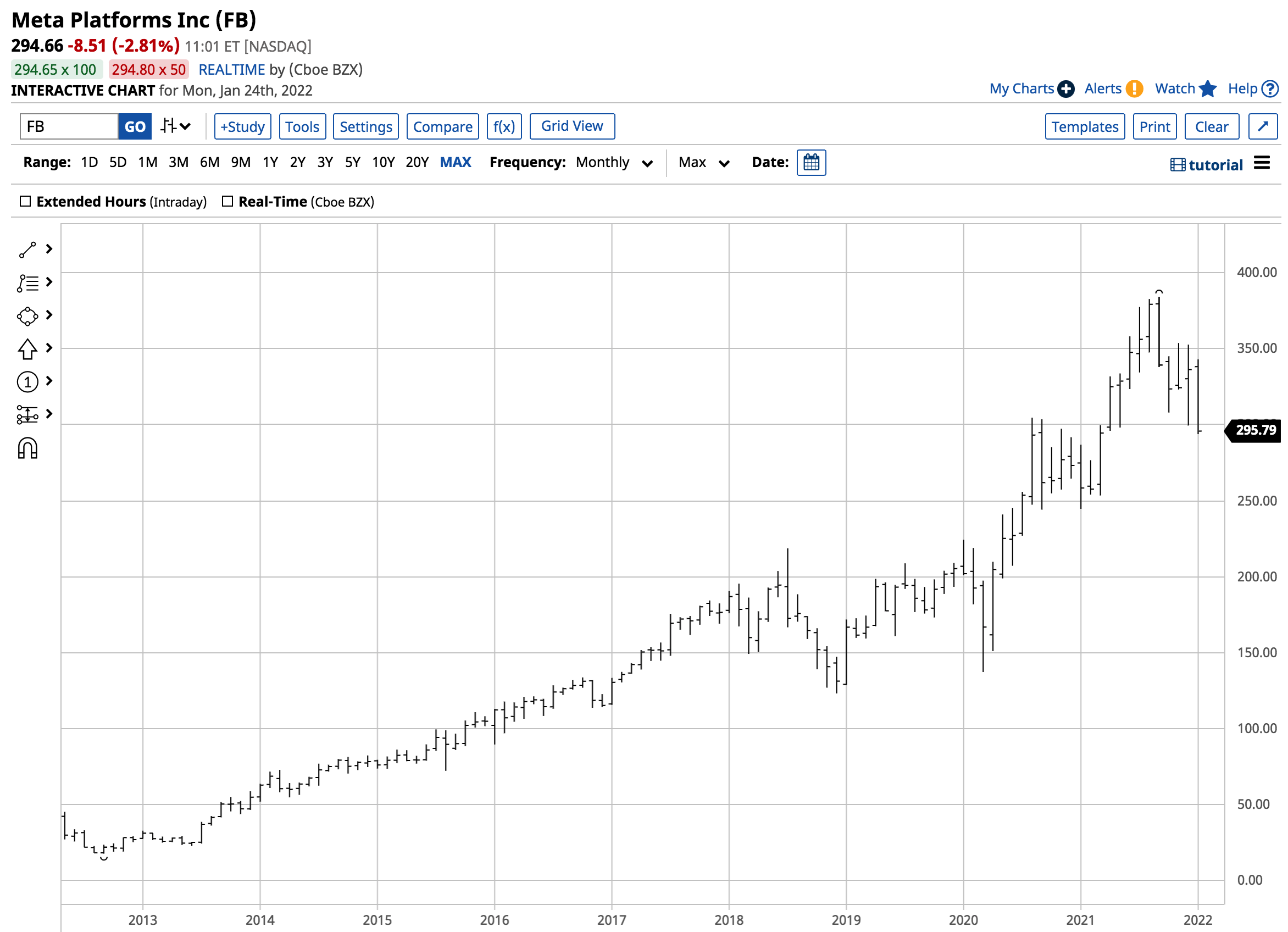 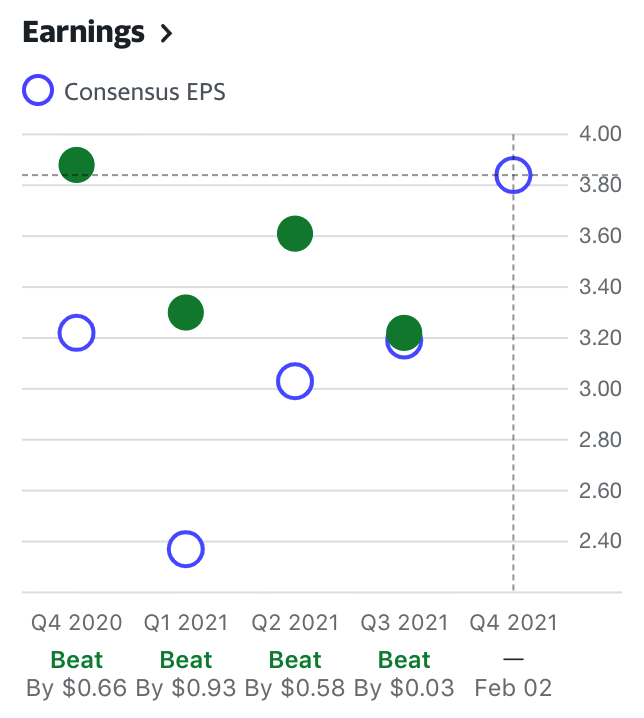 As the chart shows, FB has beaten analysts’ consensus earnings forecasts over the past four consecutive quarters. FB will report Q4 2021 earnings on Wednesday, Feb. 2, after the market close and the current EPS estimate is $3.84 per share. FB collects valuable data from its users, and advertisers are willing to pay hefty sums for access to its base. 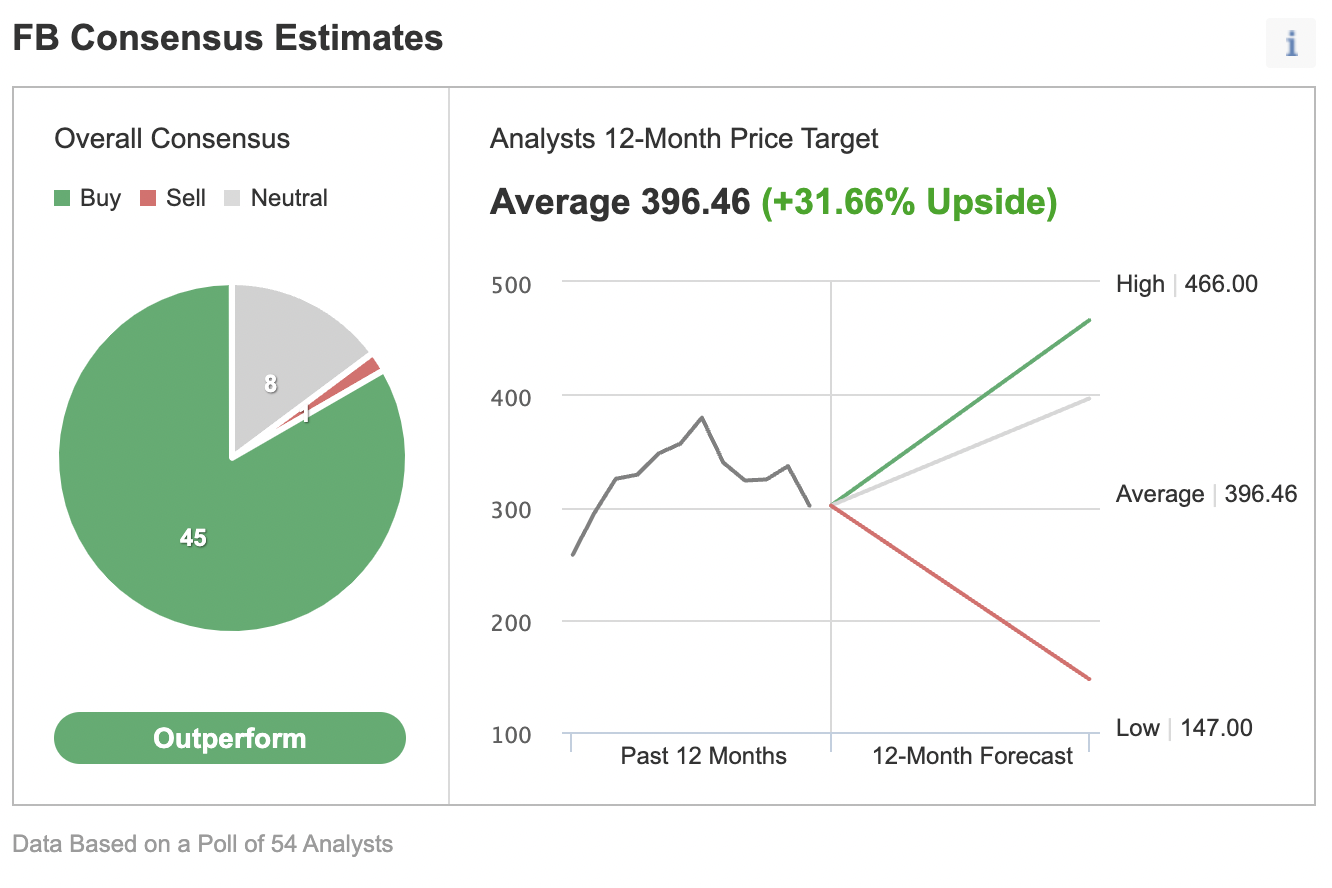 Embracing The Metaverse In 2022

FB believes the metaverse is the future, and it has positioned the company to be a leader in the virtual 3D world. Founder and CEO Mark Zuckerberg changed the company’s name from Facebook to Meta Platforms in late 2021, as part of a bid to put FB at the hub of human interaction in the metaverse.

He is wagering this is the next step for social media technological advances. Aside from the metaverse, FB is working to break into the non-fungible token market of digital collectibles, a multi-billion-dollar arena that is growing by leaps and bounds in 2022.

Regulators Have Company And Its CEO In Crosshairs

FB and Zuckerberg have been at odds with Washington regulators for years. When the company attempted to release a cryptocurrency, Libra, Congress would have no part of the initiative. In a statement that sums up legislators’ plans for the company, Connecticut Senator Richard Blumenthal recently said:

“Change is going to come. No question. We are serious about taking action. Here’s my message for Mark Zuckerberg: Your time of invading our privacy, promoting toxic content, and preying on children and teens is over. Congress will be taking action.”

In the US Capitol, where Democrats and Republicans agree on virtually nothing, there is bipartisan agreement that FB has grown to a level where its power and access to data thwart competition and cause other consequences. Recently, a federal judge paved the way for the Federal Trade Commission to move forward with a lawsuit seeking to break up FB after the company argued the complaint should be dismissed. Several state attorney generals are investigating Meta’s Oculus virtual reality group over anti-trust concerns.

FB faces increased regulation or worse as Congress could order a company breakup. Many regulators and government officials believe Zuckerberg and FB have become too big for their britches.

On Either Side Of Trillion-Dollar Valuation

Most of the companies with trillion-dollar market caps are technology businesses. But FB is in a unique situation that attracts US and worldwide regulatory scrutiny since social media is a business that has vast influence over people.

The higher FB’s market cap rises, the more intensely regulators will want to put a leash on the company. In many ways, this technology and social media company—and others like it—have far more influence on people than the government, which is the root of Zuckerberg’s problem with government officials.

Plus, in a Catch-22, advertisers cannot afford to ignore FB as the company has established a wide-reaching addressable market with data and AI capabilities that are unsurpassed.

Betting Against FB Has Been A Mistake

FB’s position in the government’s crosshairs is nothing new. It has found itself in a controversial position for years, but the profits and stock continue to rise. Betting against FB has been a tragic mistake over the past decade, despite the company's many PR missteps, bad press, and repeated government inquiries and hearings.

Even if Washington were to ultimately get its way and break up the company, the sum of the parts could wind up being worth even more than the current whole.

In early 2022, the potential for rising interest rates has weighed on all technology stocks, and Meta Platforms is no exception. However, technology is the future, and the metaverse is an area with tremendous earnings potential.

The sum of the parts of FB offshoot companies may wind up being worth even more than the single company's peak valuation if Washington breaks the Meta Platforms into pieces. Advertising is FB’s bread and butter. Its technology is likely prepared for whatever Washington decides is the future regulatory environment since programmers and the brains behind the technology are far ahead of government legislators.

FB and the tech sector have experienced sharp corrections in early 2022. However, the earnings power these companies can generate remains a significant reason why they will find bottoms sooner rather than later.